Asgore is the King of all Monsters, ruler of the Underground. He is the ex-husband of Toriel, father of Asriel Dreemurr and the guardian of the first human. He is gentle at heart, being loved by his people and loving gardening, Golden Flower Tea and his ex-wife's Butterscoth Pie. However in a fit of anger, because of the death of his children, he promised to kill every human that fell down, take their souls and then destroy humanity, making his wife leave him, disgusted with his actions. However he doesn't want to do any of those things, and immediately regreted his actions, but had to keep his duty since that was the only thing giving his people hope in their underground prison. His duty with his people is killing him inside since that day, nowadays all he wants is just to see his wife and child again.

Age: Unknown (So old that he predates written history).

Powers and Abilities: Superhuman Physical Characteristics, Superhuman Athleticism (Was capable of avoiding all of Undyne's attacks when she was younger), Skilled in H2H combat (Trained Undyne in combat), Absorption (Any monster should be capable of absorbing a human soul), Accelerated Development (Via LOVE, his stats can increase the more people he kills, killed six humans beforehand), Inorganic Physiology (All monsters are made of magic instead of physical matter), Immortality (Type 1. Boss Monsters live forever as long as they don't have a kid), Danmaku, Soul Manipulation (All monsters attack the soul directly), Dimensional Storage (Every citizen of the Underground should have access to the dimensional boxes, even via their phones), Healing (Unlike regular food, monster food turns into energy when eaten, thus healing any damages to the body and soul), Magic, Non-Physical Interaction (Magic is capable of harming ghosts, which are incorporeal), Multiple Languages (Is capable of understanding monsters who speak different languages like Froggit), Weapon Creation (Creates a trident to use in combat), Weapon Mastery (Uses a trident in battle and is very skilled in using it), Slighty Afterimage Creation (As seen here), Fire Manipulation (Uses fire magic as the basis of most of his attacks), Heat Manipulation (Should be comparable to Toriel who can make her fire cold enough to not harm anyone to making his fire hot enough that it can harm Frisk, who can tank the MTT oven exploding, which can reach temperatures up to nine thousand degrees), Astral Projection (Can project a magical version of his hands in combat), limited Law Manipulation (Asgore is able to break the FIGHT mechanics, which are show to be canon several times, like destroying the MERCY button, making Frisk incapable of sparing him), Homing Attack (Some of his flames can home in on the enemy) and Cosmic Awareness (Only nods when Frisk tells him how many times he killed them, probably has the same deja-vu feeling other main characters have), Resistance to Extreme Cold and Extreme Heat (Is able to go through Snowdin/Hotland, both stated to be extremely hot/cold by several characters, without any problems), Soul Manipulation (All monster bodies are directly attuned to their souls, therefore any damage done to their body affects the soul), Radiation Manipulation (Monsters drink radioactive waste as energy drinks). All Human SOULs abilities with them absorbed

Attack Potency: Small Building level+ (Is a Boss Monster, which is the strongest type of monster. Like his ex-wife he should be able to control the heat of his fire magic, meaning he can make his fire hot enough that it can harm Frisk, who can tank the heat of Hotland, since this increase in heat is based on his magical capabilities, the energy required to reach that heat should scale to the strengh of his attacks), Universe level+, likely Low Multiverse level, possibly Multiverse level via Preparation (Can absorb the Human SOULs if he is warned of a powerful threat, who can empower Flowey, to destroy Frisk's Save File, SAVE files represent the timeline in which the DETERMINATION user has control over, as seen by Flowey still destroying it even if Frisk has never SAVEd and with Asriel later calling it a timeline. Flowey is also show to have multiple Save Files. He was able to crash and have control of the entire game world and as seen when Chara destroys the world the game world is the entire verse's cosmology, which is this big)

Speed: At least FTL (Easily dodged all of Undyne's attacks when she was younger. Can react and tag a high determination Frisk. Should be faster than Napstablook, who was able to close their blinds before the light reached them), Inaccessible (With the human SOULs, he should be comparable to Photoshop Flowey, who moved and acted in a timeless void after destroying the timeline), likely Immeasurable (Scales to Flowey who moved between timelines) via Preparation.

Lifting Strength: Class 25 (Should be comparable to Undyne, who is capable of suplexing huge boulders), Unknown via Preparation (Should be stronger than before but to a unknown extent).

Durability: Small Building level+ (Can tank hits from a high determination Frisk while holding back, his defense is the same as his attack), Universe level+, likely Low Multiverse level, possibly Multiverse level (His defense with the human SOULs should still be comparable to his attack) via Preparation.

Stamina: Very High (He is capable of fighting Frisk for a long time without slowing down, in fact his attacks get harder and faster the longer the fight takes. Should be comparable to Undyne and Papyrus), Unknown via Preparation (Should have far more stamina than before due to being filled with determination, however how much he can gain is unknown).

Range: Extended melee range with his trident, at least tens of meters with his fire magic, Multiversal via Preparation (Comparable to Photoshop Flowey with the human SOULs who could shift between timelines and had complete control over the entire cosmology).

Intelligence: Gifted (Although Toriel was the brains behind the throne, Asgore still ruled monsterkind for thousands of years, even when she left, even if he is unfamiliar with modern technology and internet culture. Is shown to be very skilled in battle and has trained others in combat).

Standard Tactics: Asgore will start a FIGHT by breaking the MERCY button (someone's ability to end a fight in a nonviolent way) due to his immense guilt, then he will start using various fire based attacks with different patterns, as well as throwing some trident orange and blue magic. Asgore will then repeat these attacks, making them with more difficult patterns, faster and longer the more time it passes, making the fight far harder.

Weaknesses: Asgore is a very gentle person at heart, thus he will rarely fight at full power, he can also get shaken up if he remembers something of his past when doing something he knows it's wrong. All monsters are weak to extreme killing intent from a powerful soul (like Chara), therefore the crueller the intentions of their enemies, the more their attacks will hurt them, and a monster defense will weaken if they don't want to fight. Each SOUL is independent from Asgore and thus can rebel against him, however Asgore can resist them.

Note 2: Although Asgore never was able to use the souls in game, it wasn't because he couldn't and because of his character and circumstances. Therefore this profile will include it as something he can use with preparation, since unlike every other monster he is the only one who has access to them, so he is capable of using them. 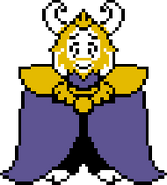