The ability to have energy envelop the user for a number of different applications. It can be used either consciously or subconsciously.

The four Maidens (RWBY) the hosts of a vast natural power that has existed in Remnant for thousands of years. With their power tied to their Aura

Imbued with the limitless power of the Chaos Emeralds, Super Sonic and his allies are able to command vast amounts of Chaos Energy. 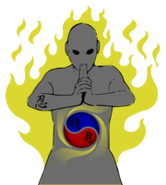 Various Ninja in the Naruto franchise are able to use Chakra to for various applications, combining physical energy and spiritual energy.

When overwhelmed with extreme sadness, Blue Diamond (Steven Universe) emits blue aura that causes any Gems caught in its wake to feel her grief.

As an Enhancer, Gon Freecss (Hunter x Hunter) is able to increase his natural abilities in both offense and defense using his Nen.
Add a photo to this gallery
Retrieved from "https://character-stats-and-profiles.fandom.com/wiki/Aura?oldid=70809"
Community content is available under CC-BY-SA unless otherwise noted.