"Bwahahaha! Hollyleaf, Rick Sanchez, Morty Smith, Kirby, Alice, greetings, all. I am very glad that you've finally made it, just in time to see the creation of my biggest project yet. With all six Infinity Stones in my grasp, it's time to begin with my true goal." --Bowser

King Bowser Koopa was the only son of a lone blacksmith from the Lost Island. A few years he hatched, his birth mother died of cancer. Distressed, his father committed suicide shortly after, while he witnessed it.

Of course you might think he was too young to remember such a thing, but he actually has a good memory, but he does not remember who they were. All he remembered was that he was taken under the stewardship of a lone wizard named Kamek, who took him from his home just two seconds flat afterward.

But even then, it was vague. Kamek was the only parent figure he had, and over time, he was taught in the ways of magic and sorcery as he grew up. One day, he had a wife who had died after Bowser Junior was born. Unlike his father, Bowser was unwilling to die of grief with his son already born. He had seven adoptive children, and one day, Bowser decided to assault the Mushroom Kingdom.

He had turned the Toads into rocks, bricks, and horsetail plants. He stormed the castle and even kidnapped Peach and stole her power. But, one day, Mario showed up, and he and his brother mowed down his army without even so much as a few soilders. They went to his castle and defeated him, rescuing Peach and undoing his curse. But, the Koopa King wasn't done yet.

He clashed with Mario for eight hundred years, until the fateful day. Mario and Peach were now lawfully wedded, and now, Bowser knew that his window of opportunity was closed, and with the two married, he had no choice but to leave them be. Angry at his failure, Bowser looked out elsewhere for achieve his goal, and the only place left to go, was out. He knew that there were other universes out there, and beyond that, he knew that there was something else. He did not know what it was, but it was an object or a group of objects of great power.

Changing his plans, he called back his Koopa army, and set forth for the wider multiverse in order to search for this mysterious power, which he would use for himself. He would encounter and fight many enemies in this journey, but to him, the struggle will be worth it.

The flame-haired, fire-breathing King of the Koopas is a powerful fighter and sorcerer who could never be described as a quitter. He never gave up trying to capture Peach and defeat Mario for over eight hundred years until his window of opportunity closed forever, and it would take him a thousand more years to give up on even more achieving goals, being very ambitious.

He deeply misses his dead parents greatly, and cries at the sight of his baby pictures, which were the only things left of his parents that he had with him, and tries to avoid any questions about where he came from or who his ancestors were, and sometimes even has outbursts and breaks into rage if they were persistent and keep on asking.

He is generally a stubborn individual who would stop at nothing to achieve his goals, and he even sometimes tries to bust through the problem. However, he is quite smart, and he even takes long hours planning his next move. He is very clever, although he can overlook a few things on his plan from time to time. He acts as a leader to his troops, whether they are old or they are new, and selects those whom he thinks are cool or useful.

If his plans involving an item backfire and it goes rogue, he will proceed to help the people who had accidentally unleashed it, especially if they never knew about it in the first place. He is also shown to be as horrified as others when some worlds are destroyed, although he sometimes does not care if other worlds die. Deep down, he has a sadness within him, and isn't afraid to admit it with people very close to him, who are few and far in between.

Age: 38 biologically and mentally, around 3,800 in human/Earth years

Speed: Immeasurable (Bowser is able to move in a place without time or supertime, as he had visited a world wiped out for an unknown reason. It is devoid of time on a high-dimensional scale and no longer has any space to move around in. He had stated he had been in what remained of a powerful empire after it was erased.) | Immeasurable (Due to his only weight being bones, Dry Bowser is faster and lighter.) | Immeasurable | At least Immeasurable

Range: Extended melee range with physical punches, Hundreds of meters to Intergalactic with projectiles, Planetary via Resurgens Inferos and Heremus Gelida, Interstellar via Hypernova technique, Varies with magic, High Complex Multiversal at peak, up to Low Hyperversal via teleportation and portals.

Intelligence: Supergenius (Should be comparable to Rick Sanchez, who was able to tell when he was inside a simulation and learn how to fabricate an origin story while tricking his captors into downloading a virus made to give him full control over their equipment. Bowser is able to effortlessly think up the blueprints of a double-mode battle mech and a giant castle that was inspired by the Citadel of Ricks. Even before going into the wider multiverse, Bowser had prior knowledge of the Warriors universe, the Adventure Time universe, and the Rick and Morty multiverse and some of the characters within them. Bowser is able to command an entire army composed of trillions, even if they are planes apart from him and/or each other.)

Weaknesses: Bowser, while extremely smart, is arrogant and sometimes lets his anger get the better of him. He is very stressed out about his past, and was once afraid of clowns (Which ironically gave him the inspiration for his Koopa Clown Car). The Tanooki Suit can allow its user to overcome his petrification ability. | Due to being nothing but bones, Dry Bowser is unable to eat, sleep, or feel. Otherwise, it is the same. | Same as before, plus Giga Bowser could only last so long and take so much punishment before reverting back to his base. | Still is just as arrogant as before, and still occasionally lets his anger get the better of him.

Koopa Claw: One of Bowser's most basic weapons is his claws. With his claws, he can scratch at the enemy with a bony material harder than diamonds.

Bowser Bomb: Bowser can jump up and slam on the ground with all of his weight. This ability can cause people to loose their grip and trip and/or create a wind that can blow people back when it is used, and he can grab the unlucky person underneath with his horns.

Shellspin: Bowser can tuck his body into his shell and spin at an alarming rate. He can even make a wind current with it if he so wanted to.

Shockwave Stomp: Bowser jumps up and stomps on the ground, creating two circular shockwaves that expand for a while before disappearing. It could be used multiple times.

Spike Shooting: Bowser can eject his spikes from his shell at high speeds and regrow them almost instantaneously.

Star Spin: Like with Mario, Luigi, and Rosalina, Bowser is capable of the Star Spin, an ability that he had learned in the cosmos.

Blinding Flash: A flash of light is summoned, temporarily blinding foes so he can escape.

Terrakinesis: Bowser is able to manipulate the earth itself, channeling rocks into any shape he desires, including create a rocky shield around himself to roll around in. It has no specific techniques within it.

Petrification: The target will be turned into stone. It does not matter what kind of stone the target turns into. Although, the Tanooki suit can reverse that ability with relative ease.

Botanokinesis: The power to manipulate plant life. Bowser can cause vines to ensnare the target as he wishes. He can even make them suck the life energy out of one, causing a regular man to shrivel up into an unrecognizeable blob of grey, blood-covered tissue when finished.

Chain Summoning/Manipulation: Bowser can summon metal chains from the ground, said chains would obey his command. He can charge them with fire, ice, or electrical energy, and these chains can nullify any magic besides his own once wrapped around the target.

Portal Creation: Bowser can summon portals to go anywhere in time, space, or in any universe in which he so desires.

Extra Life Creation: In similar yet stronger ways to StarClan, Bowser can induce extra lives onto people, each with a chosen gift. He had done so to turn three random former warriors into leaders in their own rank.

Prophecy Construction: With his power, Bowser could create prophecies, and he did this when he went to the Warriors World. These prophecies tend to come true in eerie ways. He can also overwrite other prophecies by replacing them with his own.

Giant Bowser: Unlike most of his alternate forms, Bowser has a wide variety of ways to grow into a giant, like getting crushed by something, which doesn't happen too often. Another way is through someone else's magic, or commonly, sheer force of will.

Koopa Clown Car: Bowser's old mode of transportation. What most do not know is that it was a byproduct of his own phobia of clowns. Even without it, he still uses it for some reason.

Bowser Mech: The Koopa King owns a giant robot with two modes. One mode is for faster travel, and another mode for more advanced combat.

Hammers: Bowser is capable of summoning hammers in his hands and throwing them at the target like a normal Hammer Bro would. As Dry Bowser, the hammers are replaced with throwable bones.

Double-Sided Trident: A double trident that Bowser uses as a melee weapon. He had obtained said trident through unknown means. He can use it to suck magic out, and can charge it with electricity or heat it or cool it.

Regeneration Potion: Bowser tends to hate being Dry Bowser, and he was first reduced to this bag of bones during one of his fights with Mario. Contrary to popular belief, his son did not throw him into a pot of potion to revive him, but to regenerate his flesh.

Smash Balls: To transform into the ferocious Giga Bowser, a Smash Ball is required. Before going off to the wider multiverse, Bowser collected a good lot of them to take with him while the people in his kingdom were preparing in their own ways.

Infinity Stones: Six powerful stones that can wipe out the multiverse, and although their functions are similar to the Marvel ones, the way they behave is altered a bit.

Note 1: I am planning to put my fanon Bowser in a fanfic on Archive of Your Own. Said fanfic would be a mystical sci-fi/fantasy adventure with a bit of comedy to lighten it up.

Note 2: Originally, I was going to do an Eye of Horus, but, I changed it to the Infinity Stones to make more of a story out of it.

Note 3: This is going to go through some MAJOR revisions. I might be classifying different versions of him through different stories. 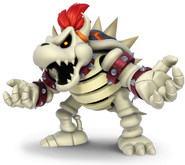 Add a photo to this gallery
Retrieved from "https://character-stats-and-profiles.fandom.com/wiki/Bowser_(Fanon)/Omniversia999?oldid=112964"
Community content is available under CC-BY-SA unless otherwise noted.