Each concept is linked with its respective "object". In this way, altering the concept will change every object in the same way the concept itself was changed, effectively altering reality on a universal, if not higher, scale.

1. Platonic Concept: Such concepts, or forms, are completely transcendent of reality in every aspect. These forms are 1-A in nature, as they are beyond all spatial and temporal dimensional constructs and all of reality merely "participate" in these concepts. For example, a circular object is circular because it is "participating" in the form of "circle-ness". In this way, the alteration of these concepts will change every object of the concept across all of reality. These concepts must exist prior to and after the existence of any object of the concept.

Superman (DC Comics) due to being the descended of Rao can create and manipulate concepts such as loneliness, nature, love, madness, hatred and many others 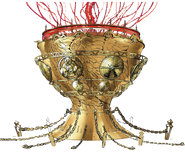 Yaldabaoth (Persona 5) can attack with the Seven Deadly Sins themselves
Community content is available under CC-BY-SA unless otherwise noted.
Advertisement