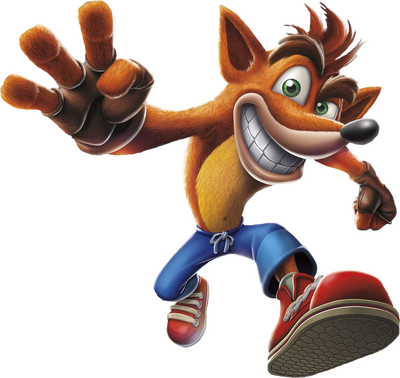 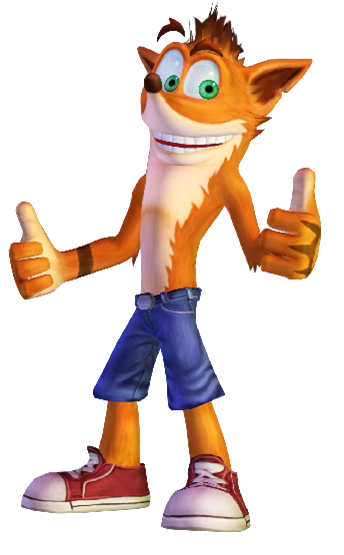 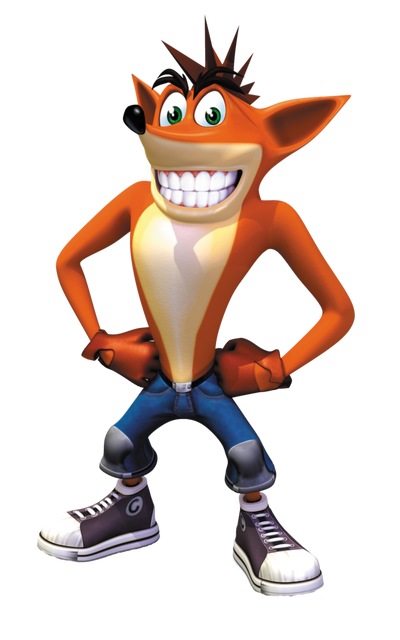 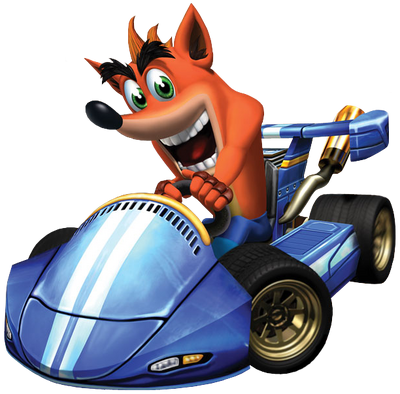 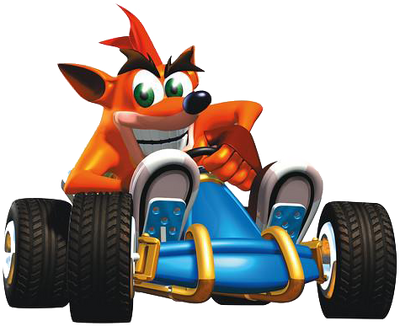 Crash Bandicoot is the main protagonist of the Crash Bandicoot franchise, an eastern barred bandicoot genetically mutated and enhanced by the evil mad-scientists, Dr. Neo Cortex and Nitrus Brio, in hopes of growing the former's army. Following the failure of the Cortex Vortex device to take control over him, however, Crash was able to flee from the castle he was held captive in. His escape successful, he quickly realize that his girlfriend, Tawna Bandicoot, was still held hostage, thus starting his journey across islands, villages, ruins and laboratories alike to save her and stop Cortex's from accomplishing his goals, defeating the results of his other experiments, Ripper Roo, Koala Kong and Pinstripe, as well as a tribal chief known as Papu Papu and Doctor N. Brio himself along the way. Following his success and the defeat of Cortex, Crash went on numerous other adventures throughout multiple videogames, and started living on Wumpa Island along with his sister, Coco Bandicoot, the masked spirit, companion and father figure, Aku Aku, and reformed ally, Crunch Bandicoot.

Age: Unknown, though is likely around his teen years

Attack Potency: At least Multi-Continent level (Fought and defeated Crunch Bandicoot empowered by the Elementals respectively: Rok-ko, Wa-Wa, Lo-Lo and Py-Ro, and even defeated all of them simultaneously. Wa-Wa was stated to control water, allowing him to flush the world clean and rebuild it the way he remembers it. Furthermore, all the Elementals were stated to have ravaged the globe prior to being put into a state of hibernation, with Py-Ro being the most powerful out of them. Can harm Nitros Oxide, who would have turned the entire globe into a concrete parking lot should the Earth's racers fail to beat him. Capable of defeating other comparable enemies, such as Ripper Roo, Tiny Tiger, and Dingodile, all of whom are capable of one-shotting him and surviving attacks from him. Can trade blows with various titans and mutants, and through the use of jacked/possessed titans, he was able to overwhelm Uka Uka powered-up by the Evolvo-Ray, whom should be superior to all the aforementioned villains) | Varies from Planet level (Destroyed the Cortex Minimizer, which is fueled by Power Crystals, allowing it to shrink planets the size of Earth down to the size of a marble. The Crystals were also stated to be able to prevent all the 13 planets of the solar system from aligning and causing a Solar Flux that would destroy the world, in addition to potentially containing the energy of a whole planet. Fought Evil Crunch, Evil Coco and Fake Crash, knocking them out of N. Trance's hypnosis) to Low Multiverse level (Defeated N. Tropy, who stated that he can harness the powers of time and space, which consists of at least 5, if not well over 55 or more separate points in time collectively showcased in the form of warp rooms and/or levels in Warped and N. Tranced. Can damage and defeat N. Trance, whom is portrayed as an equal to N. Tropy), likely High Multiverse level+ (N. Trance was outright stated to be a 5th Dimensional being. Despite the previous explanation, N. Tropy's statement should also fall under this tier, because not only is he portrayed as an equal to N. Trance, whom is presumably 5th-dimensional in a spatial sense given the wording of the term and the default definition of "Dimension", but the 5th Dimension is also heavily implied to a be a part of space-time anyway, as indicated by the use of the following quote: "In his travels through space and time, N. Tropy came across a 5th dimensional being". Keyword: through, instead of something along the lines of "beyond". This would make N. Tropy's aforementioned capability to harness the powers of space and time likely High 2-A, rather than just 2-C, due to the 5th-dimension and 5th-dimensional beings being a part of it) | Multiverse level+ (Previously fought and defeated Dr. Cortex, who could damage the Evil Twins' death robot, when the Twins alone were stated to be an evil that surpasses Uka Uka himself, proven when they easily defeated the Aku-Uka brothers. They also described themselves as "masters of the infinite dimensions, with power over reality itself"), higher in Mecha-Bandicoot (Destroyed the Deathbot)

Speed: Varies from Massively Hypersonic+ (Can react to and dodge lightning attacks from the likes of Crunch empowered by Lo-Lo, voodoo enemies, and the Ee-Lectric. Drove a Go-Kart that can keep up with Oxide's vehicle, which reached Earth from outer-space in just 4-6 seconds, albeit the exact distance is unknown) to Massively FTL+ (Piloted a spaceship capable of interstellar travel. Can keep up with and surprise those capable of keeping up with Oxide) | Varies from Massively Hypersonic+ to Immeasurable (Kept up with N. Tropy, who can traverse space-time, and N. Trance, whom is a 5th Dimensional being) | Immeasurable (Comparable to the Evil Twins, whom can physically travel from the Tenth Dimension to Crash's and vice-versa)

Lifting Strength: Superhuman (Can lift and throw a person like Cortex and concrete crates with little effort, as well as deadlift two large blocks of stone). At least Class 100 in Mecha-Bandicoot.

Intelligence: Varies from Below Average to Above Average (Throughout his numerous adventures, Crash has demonstrated competent combat, driving and piloting skills, allowing him to keep up with and even overcome highly experienced racers like Nitrous Oxide and Emperor Velo XXVII, in addition to genius scientists like Neo Cortex and Nefarious Tropy. Also defeated the Evil Twins using Mecha-Bandicoot for his very first time, having only witnessed it in-action during his fight against Cortex and N. Gin, as well as build a car and a rocket ship on his own. Despite the aforementioned feats, it's typical of Crash to be rather stupid, as he fell for Cortex's lies in Cortex Strikes Back and his painfully obvious disguise in Twinsanity)

Weaknesses: Doesn't know how to swim. Can be fairly idiotic at times, as explained above. 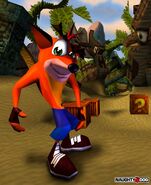 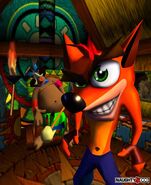 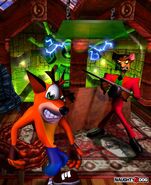 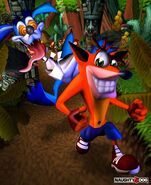 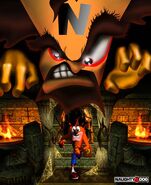 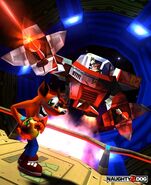 Crash during his fight with N. Gin in Cortex Strikes Back 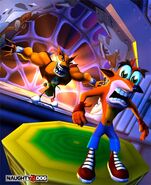 Crash during his battle against Tiny Tiger in Cortex Strikes Back 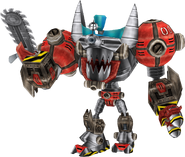 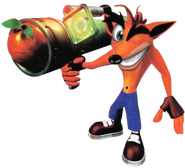 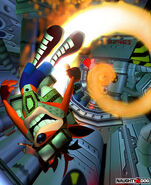 Crash in his Jetpack 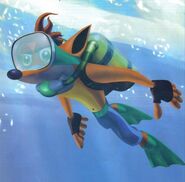 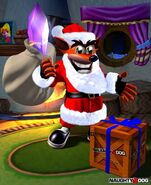 Crash dressed up as Santa Claus 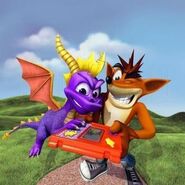 Crash alongside Spyro the Dragon

Crash and his sister Coco on the former's motorcycle 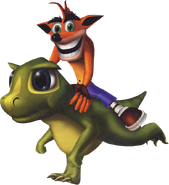 Retrieved from "https://character-stats-and-profiles.fandom.com/wiki/Crash_Bandicoot_(Canon,_Character)/ZeroTC01?oldid=80784"
Community content is available under CC-BY-SA unless otherwise noted.