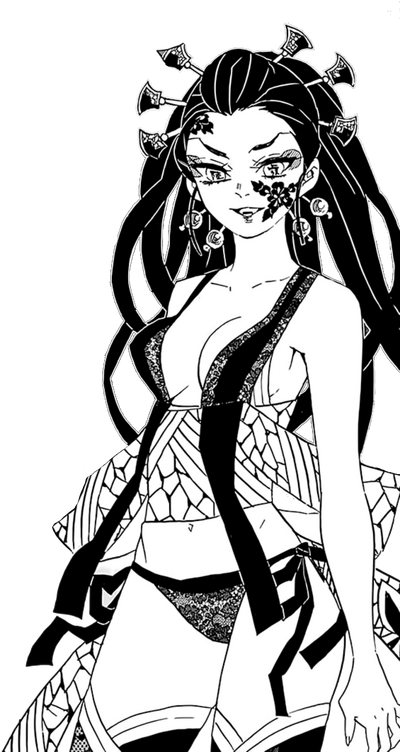 Daki (堕姫) was an Upper Kizuki Demon and antagonist of the Entertainment District Arc of Demon Slayer: Kimetsu no Yaiba, working directly under Muzan Kibutsuji alongside her brother, Gyutaro.

Originally named Ume, she was child born in the lowest caste of the Red-Light District. She was forced to live without any parents due to her mother, besides viewing her as a burden she wanted to discard, dying of a disease known as "Ume", which she was later named after. From then on, she lived in poverty alongside her older brother, but they eventually managed to get a well-earning job. When Ume turned 13, however, she was burned alive in retaliation for her blinding a samurai by poking his eye out with her hairpin. On the verge of death, she was then turned into a demon by the Upper Kizuki Demon, Doma, along with Gyutaro.

Powers and Abilities: Superhuman Physical Characteristics, Acrobatics, Self-Sustenance (Type 3), Extrasensory Perception (Can see her opponent's movements), Enhanced Senses, Telepathy, Genius Intelligence, Martial Arts, Weapon Mastery, Immortality (Type 1, 2, 3 and 8; Is one with Gyutaro, and they must be defeated simultaneously in order for them to die, allowing her to regenerate from even decapitation as long as he's alive), Regeneration (High-Mid; Can quickly regenerate from decapitation, her head being crushed, and losing limbs), Reactive Power Level (Kokushibo states that both humans and demons alike can grow and surpass their limits through battle), Absorption & Statistics Amplification (Can grow stronger by eating humans), Body Control, Elasticity (Can turn her neck into a sash, allowing it to stretch when slashed, making it necessary to attack her from multiple directions simultaneously or with enough speed in order to decapitate her), Biological Manipulation (Can turn people into demons with her blood), Aura & Fear Manipulation (Has a vastly superior aura to the Lower Kizuki Demons, which can cause shuddering and a feeling of lacking air, as she could inflict fear upon Entertainment District Arc Tanjiro), Sleep Manipulation, Sealing & Transmutation (Can seal people within her sash and turn them into flat, 2-dimensional designs, also putting them to sleep), Blood Manipulation, Poison Manipulation, Summoning (Can summon Gyutaro at any time from own flesh), Resistance to: Regeneration Negation (As long as Gyutaro's alive, she can regenerate from nichirin blades, which normally negate demons' regeneration by decapitating them), Disease Manipulation (Demons are unable to get sick), Pain Manipulation (Demons are shown to be capable of handling intense pain, as they can shrug off their limbs and heads being sliced off or crushed), Poison Manipulation (Can quickly recover from the poisonous effects of wisteria flowers, scaling to Gyutaro), Fear Manipulation (Should easily resist the Lower Kizuki Demons' aura), Sleep Manipulation, Hypnosis, Paralysis Inducement, possibly Dream Manipulation, Death Manipulation & Soul Manipulation (Enmu implied that he could only challenge an Upper Kizuki Demon if he receives more of Muzan's blood, suggesting that they resist his Blood Demon Art)

Attack Potency: Small Town level (As an Upper Kizuki Demon, she is vastly superior to Enmu and the rest of the Lower Kizuki Demons, being on a completely different level of strength than them. Previously killed seven Hashira. Easily cut through multiple buildings, heavily injuring Tanjiro. Nearly killed Tanjiro with a single attack, and later deflected an attack from him despite using Hinokami Kagura. Ultimately needed the combined efforts of Inosuke and Zenitsu in order to be defeated)

Stamina: Limitless (Demons have no concept of fatigue and can constantly fight at full power)

Intelligence: Genius (Daki is shown to be an incredibly skilled combatant whose skill compares to the likes of Tanjiro, managing to keep up with him both tactically and in close-quarters combat. Despite being a demon, she has also managed to live among humans without most of them suspecting anything)

Weaknesses: Exposure to sunlight would quickly reduce her to ashes. Wisteria flowers are poisonous to her, albeit to a much lesser degree than regular demons. Those sealed within her sashes can be freed by cutting them, albeit this requires outside interference.

Note: Credit to the Demon Slayer Wiki for the Notable Attacks/Techniques section.