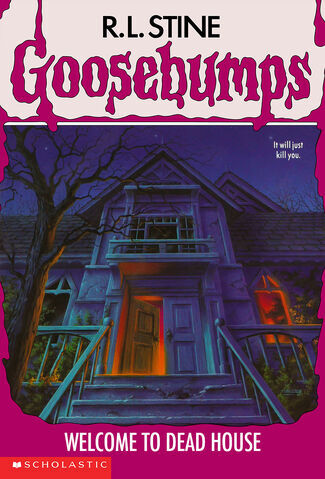 Dark Falls was once an ordinary town until a horrific accident occurred in the local plastics factory on the outskirts of town. Resulting in the creation of a mysterious “Yellow Gas” that quickly floated over the town, killing and reanimating every living organism. Turning Dark Falls into a town that was infested by the living dead.

Population: At least 1,000 (since the average town population is at the absolute least this amount) however this is gradually increasing as more and more people are lured into Dark Falls

Superhuman Strength and Durability, Goosebumps Monster Physiology, Enhanced Senses (Mainly live and thrive in dark places. They can also smell the blood of the living), Stealth Mastery, Immortality (Types 1, 2, 3, 5, 7 and 8; Presumably haven’t aged ever since the accident. All residents are likely comparable to Compton Dawes, who can survive having a hole knocked into his head and seemingly healed from it. In Goosebumps Horrortown, they are in a state called "pseudo-death". Were turned undead after the accident. Can remain alive as long as they have the blood of the living once per year), Non-Physical Interaction (Are often seen interacting and touching each other), Regeneration (Low-Mid, possibly Mid-High) (All residence are possibly comparable to Compton Dawes, who seemingly healed from having a hole smashed into his skull. The residents that evaporated to steam seemingly came back to make an appearance in Goosebumps Horrortown, and all residence are likely comparable to them), Corruption (Type 2; After killing their victims, they turn undead), Social Influencing (Have been luring living humans into their town for years), Blood Manipulation (The blood of the living replenishes their Immortality for another year), Heat Manipulation (On multiple occasions, they seemingly gave off a chilly feeling to the Benson family despite it is notably hot and harm at the time), Telekinesis (Can make doors open without touching them and can make curtains move without touching them and with the nearby windows closed), Non-Corporeal (Have been implied to be ghosts), Teleportation or Invisibility (Said they disappear and reappear out of nowhere), Power Bestowal (Can give their victims who they killed the supernatural abilities they have), Poison Manipulation (Are products of The Yellow Gas, which is a poison that kills living organisms instantly and reanimate them), Self-Sustenance (Type 3; After death, they were incapable of rest), Bloodlessness, Blood Empowerment, Body Control (Can change their skin tone to resemble normal humans), Intense Fear Inducement (In Goosebumps Horrortown them along with the other monsters can induce intense fear into their victims), Resistance to Blood Manipulation (Have been sucked dry of their blood), Sleep Manipulation (Are incapable of resting), and the effects of The Yellow Gas (Are no longer affected by The Yellow Gas)

Non-Corporeal (Is described as a gas), Necromancy and Corruption (Type 3; Turned the entire town of Dark Falls into the living dead), Intangibility (Is a gas), Weather Manipulation (Is likely the cause of the unnatural weather patterns, causing multiple storms and cloud formations), Poison Manipulation, Power Bestowal, Deconstruction (Is implied to be causing pollution), Death Manipulation (Instantly killed all living organisms that came in contact with it, including plant life), Flight (Floated quickly over and through the town of Dark Falls), Madness Manipulation (Type 2; While also corrupting the residents of Dark Falls, it also made them willingly lure and kill living people for their blood)

Attack Potency: Wall level (Residents of the town have consistently shown feats of this level. Breaking through wooden walls. Killing families and dogs. Punching holes into walls. Break down doors, wooden stairs and barricades. Overpower Josh, who can break holes into human skulls with a flashlight. etc) | Unknown (Has affect over all of Dark Falls)

Speed: Normal Human | Subsonic, possibly higher (Traveled across all of Dark Falls and killed all the citizens of the town before they react and know what was happening)

Industrial Capacity: Limited, only getting a random amount of people to their town on a yearly basis

Military Prowess: At least 1,000 since the average town population is at least this amount, while they lack actual combat experience, they still manage to eliminate their victims and use their abilities with varying levels of success.

Weaknesses: Can easily be killed by light. Require blood on a yearly basis to continue living and not starve. Can be held back by good luck charms. | None Notable.

Retrieved from "https://character-stats-and-profiles.fandom.com/wiki/Dark_Falls_(Canon,_Composite)/Gewsbumpz_dude?oldid=137596"
Community content is available under CC-BY-SA unless otherwise noted.