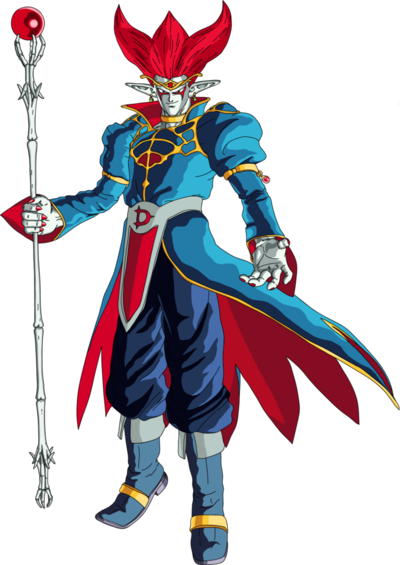 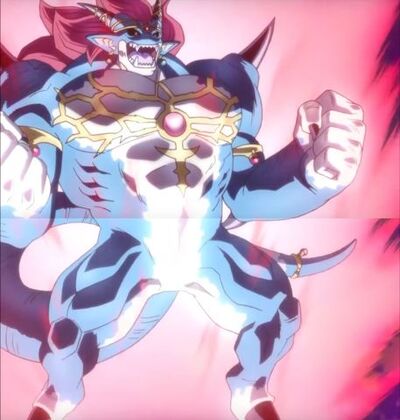 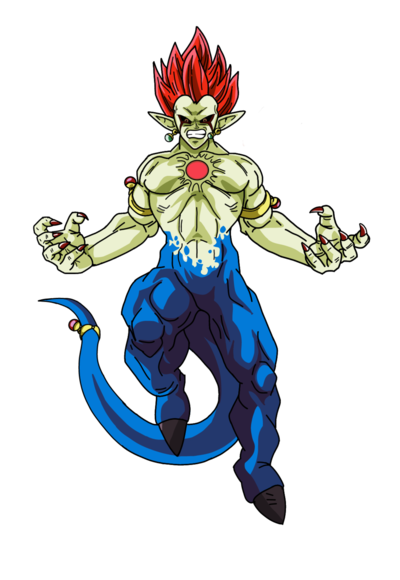 Demigra, also referred to as Demon God Demigra, is a recurring antagonist in the Dragon Ball meta-series. Along with being one of the Demon Gods, Demigra is one of the main contributors to the creation of the Demon Realm as well as a former member of the Dark Empire.

He is the main villain and the final boss of the main story line of Dragon Ball Xenoverse, where his goal was to escape the Crack of Time, an enclosed space in which he was imprisoned by the Supreme Kai of Time, Chronoa, for over 75 million years, and take over all of space-time, all the while destroying the entirety of Dragon Ball's history in the process and later recreating it in his own image. Additionally, an alternate timeline version of himself an appearance during the DLC missions of the sequel to Xenoverse, Dragon Ball Xenoverse 2, where he assists Dabura, but was ultimately defeated. Demigra is also a recurring villain in Dragon Ball Heroes, where he serves as a main enemy of the Time Patrol.

Demigra's personality can be best described as a God Complex; he believes himself to be the only one worthy of the role of Supreme Kai of Time, and has demonstrated animosity towards Chronoa as a result of this. He is prideful, yet arrogant and sadistic, finding enjoyment out of sometimes toying with his opponents. Due to his time spent trapped in the Crack of Time, he has also developed tremendous patience and persistence, having completely let go of the idea that he would give up on achieving his goals after so many attempts and mega-annums of planning and waiting.

All previous abilities, Godly Physiology, superior Magic, Darkness Manipulation, Reactive Evolution (Was gradually growing in power whilst he was imprisoned in the Crack of Time), Teleportation, Status Effect Inducement, Poison Manipulation, Power Nullification, Sealing (Can seal his opponents in shackles of time. While this ability is shown to be temporary in Dragon Ball Xenoverse, that is possibly due to game mechanics), BFR, Time Travel, Space-Time Manipulation, Immortality (Types 1, 3 and 4), Resurrection (Resurrected himself after his physical body, as well as his "essence", were completely annihilated in both Dragon Ball Xenoverse and Dragon Ball Heroes), Regeneration Negation (Mid-High; Pinned down and could have killed the Future Warrior, even when the latter is a Namekian or a Majin), Possession (Shown here), Illusion Creation, Invisibility, Portal Creation, Wormhole Creation, Transmutation and Absorption (Turned Toki-Toki into a piece of candy, before eating him and absorbing all of his powers), Reality Warping (Warped all of Toki-Toki City upon escaping the Crack of Time), Physics Manipulation (A major contributor to the creation of the Demon Realm, a place where magic overrules the laws of physics), Non-Corporeal and Nigh-Omnipresence (In his Evil Energy state), Clairvoyance (Via his Divination Orb), Corruption, Madness Manipulation (Type 2) and Mind Manipulation (Was capable of mind-controlling and, through the use of evil energy, corrupting Broly and Vegeta, as well as multiple other warriors, whom previously resisted and broke out of said abilities, effective bypassing even Gohan's Pure Heart. Affected Piccolo's mind and his sanity), Empathic Manipulation, Resistance to: Extrasensory Perception (Cannot be sensed by beings lesser than a God), Magic, Madness Manipulation (Type 2), Possession, Corruption (Type 3), Mind Manipulation, Empathic Manipulation (As a God, Demigra is resistant to magic and dark ki similar to his own), and possibly Power Mimicry (It is impossible for the Future Warrior to gain any of Demigra's abilities or skills in Dragon Ball Xenoverse, although this is possibly due to some game-balancing), Acausality (Type 1; The Time Breakers tampering with history and the timelines caused many time paradoxes, distortions and anomalies. However, Demigra was never shown to be affected by this, not even when he himself was causing the distortions)

All previous abilities, Resistance Bypassing (Able to corrupt and mind-control multiple Future Warriors at once, despite them possessing God Ki)

All previous abilities boosted to the current level, superior Space-Time_Manipulation (Absorbed the embodiment of space-time itself, Toki-Toki), Existence Erasure (Stated that he would erase beings to the point where they would have never even existed), Intangibility (Can turn into sentient energy via Boiling Burg)

All previous abilities boosted to the current level, Higher-Dimensional Manipulation and Void Manipulation (Created a non-existent castle and connected said castle to the Crack of Time, which is a 4th-dimensional space), Probability Manipulation and One Hit Kill (By raising Miracle CI to Perfect, he can greatly increase the chances of his attacks harming his opponent and, in turn, decrease the chances of said attacks missing, being dodged, or being stopped. This can also function as a one-shot attack), Power Nullification and Statistics Reduction (Able to seal his opponent's abilities, as well as significantly reduce their power), Heat Manipulation, Fire Manipulation, Ice Manipulation, Electricity Manipulation (Via Lightning Distortion), superior Reality Warping (Was causing infinite possibilities to overflow and completely unrelated timelines to converge and interact with each other), Life Manipulation (Using Draw, Demigra can steal his opponent's life force and use it to heal himself before detonating it), Pocket Reality Manipulation (Possesses the ability to create pocket dimensions), Fusionism and Immortality (Type 4; Stole the powers of Towa, who was going to merge the Demon Realm with the entire multiverse and is capable of reviving herself thanks to hatred), Resistance to: Probability Manipulation, Power Nullification, Soul Manipulation and Memory Manipulation (Gods are immune to Android 21's waves, which affected Krillin's memories, swapped souls, and drastically weakened the Z-Fighters)

Attack Potency: Universe level+ (Fought against Chronoa, whom as a regular Kaioshin should be comparable to the rest of the Toeiverse Kaioshins. Aided in the creation of the Demon Realm) | At least Low Multiverse level, likely Multiverse level (Superior to the Supreme Kai of Time, Chronoa, whose job involves merging timelines together and fitting them into a single scroll, said timelines containing 12, if not 18 universes at some points in history, of this size. Superior to Kid Buu, who destroyed an entire timeline) | Multiverse level (Stated to have gained control over all of space and time. Absorbed the embodiment of space-time, Toki-Toki, and with the latter's powers, he was going to destroy all of history and recreate it in his own image, as well as destroy the Time Vault. There have been numerous statements indicating countless timelines, as well as ones indicating the existence of timelines, points in history and possibilities which possess their own flow of space-time and have no effect on history itself. After turning into his Giant Demon God Form, Demigra became much more powerful than before, with the battle between himself and the Future Warrior, in addition to Super Saiyan 3 Goku if the conditions are met, causing the Crack of Time, an enclosed space separate from the dimension of time in which Dragon Ball's history can be viewed as 4th-dimensional crystals, to crumble. This puts Demigra at a very high end of 2-B, as we can deduce that the Crack of Time is basically another set of Dragon Ball's history, while new timelines are constantly being formed by the "smallest of things", decisions and changes across the present universes, a concept that has been inherited in the videogames. Moreover, Demigra was then stated, multiple times, to transcend space-time, making him fully capable of destroying it all) | Multiverse level (Originating from an alternate timeline, this Demigra was recruited by Dabura during the Infinite History Saga to serve as backup, fighting the Xenoverse 2 Future Warrior and their master alongside him, albeit he was defeated and killed in the process. This battle alone, however, is enough to put this Demigra above the likes of Final Form Mira and his Giant Demon God Form in Xenoverse) | High Multiverse level+ (Transcended space and Dragon Ball Heroes in its entirety, reaching a dimension known as the Real World, primarily known as the Over World or Beat's World, a realm that views the multiverse as fictional manga panels and arcade games, suggesting that it is a higher-dimensional construct. However, there are other statements to support this claim. As previously stated, Demigra had to transcend space and the multiverse as a whole in order to access the Real World. Additionally, the citizens of said world are required to generate avatars through the use of Hero Switches in order to interact with the videogame world, as higher-dimensional entities are normally incapable of directly interacting with lower-dimensions. Stole the powers of Towa, who created "Dimensional Doors" powered by Dark Ki, which also transcended space and the multiverse as a whole. In the Nintendo Switch version of Super Dragon Ball Heroes, transcending into the Real World is referred to as "overcoming the barrier between dimensions". Overloaded the multiverse with overflowing possibilities, when the number of existing worlds and possibilities was stated to be infinite on multiple occasions. Bestowed his powers to Chamel, whose mere presence was collapsing the Real World. Comparable to Demon God Salsa, who literally played Ultimate Mission X and views it as mere fiction. Later assisted the Time Patrollers in the war against the Dark Empire and should be superior to Roberu, who deflected a Kamehameha from Xeno Goku, indicating that he has gotten much more powerful than when he previously fought him. Should be superior to Sealas, whom can form and destroy extra-dimensional space)

Standard Equipment: His Staff and his Divination Orb (Only in his Base Form) | Same, in addition to the Shirogame Fortress

Intelligence: Extraordinary Genius (Received training to become the Supreme Kai of Time and was a candidate for obtaining said role. Possesses over seventy-five million years of experience, perceiving different timelines and events. Constructed a plan to take over all of space-time and recreate history in his own image, which nearly succeeded. Possesses magic which "transcends human knowledge", including that of Bulma and Dr. Gero, whom previously invented highly advanced technology, such as time-travelling machines, androids capable of wiping out entire solar systems and potentially universes, etc.)

Note 2: For further elaboration on the Demon Gods' abilities, read this blog. 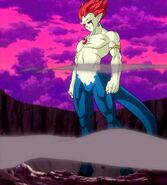 Demigra in the opening cutscene of Dragon Ball Xenoverse 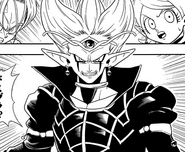 Mammoth Mogul (Sonic the Hedgehog (Archie Comics)), Mogul's profile (Both were at High 2-A)

Master Unit: Amaterasu (BlazBlue) - Amaterasu's Profile (Demigra was aligned with True Enerjak, with everyone being at High 2-A and bloodlusted, speed was equalized)

Retrieved from "https://character-stats-and-profiles.fandom.com/wiki/Demigra_(Canon)/ZeroTC01?oldid=100543"
Community content is available under CC-BY-SA unless otherwise noted.