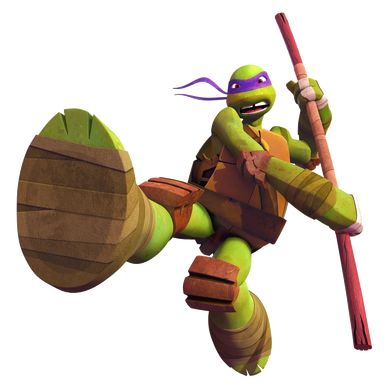 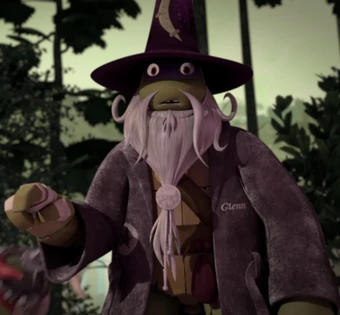 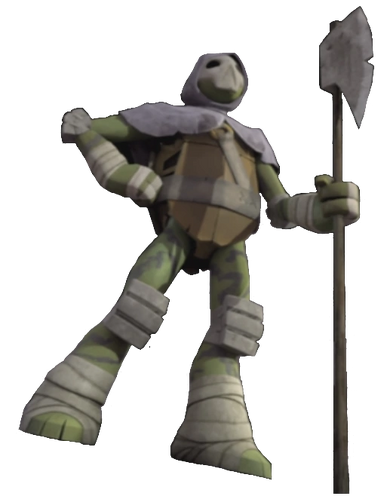 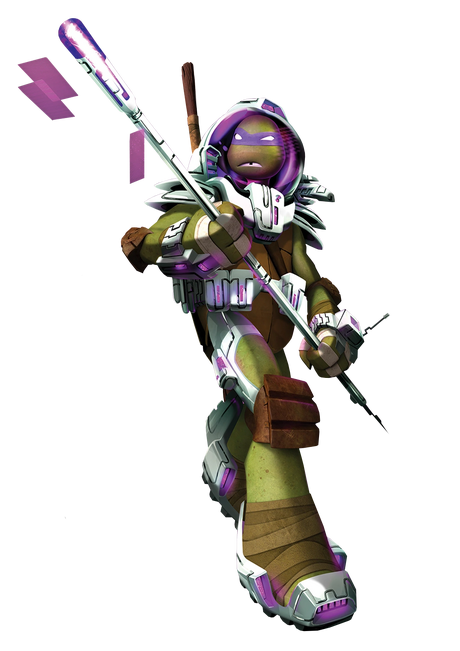 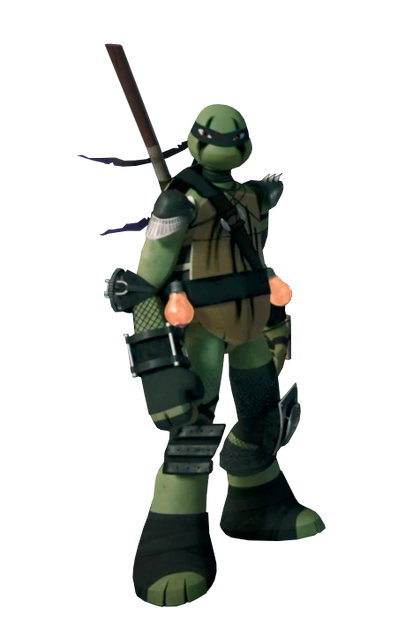 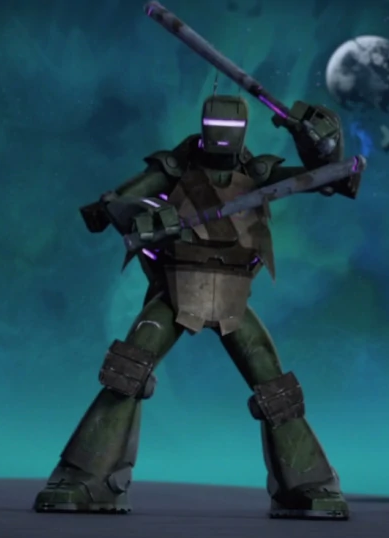 Donatello, nicknamed "Donnie" is the brains of the Teenage Mutant Ninja Turtles. He is in charge of the design and manufacture of all the tools and weapons in their arsenal. He fights with a bō, which converts to a naginata (in which a blade pops out of one end).

Donatello is voiced by Rob Paulsen, who used to be Raphael's voice actor in the 1987 animated series.

Superhuman Physical Characteristics, Martial Arts (Mastery of Ninjutsu), Weapon Mastery (Most notably with his Bō), Instinctive Reaction, Stealth Mastery, Regeneration (Low. He recovered from his injuries in a few hours after the fight with Baxter Stockman), Smoke Screen Generation (Via Smoke Bombs, which can disorient enemies by causing irritation to the eyes and clouding their vision), Resistance to Electricity

Small Building level (Defeated Fishface, who is much stronger than standard Foot Ninja. Has staggered and damaged Dogpound with his blows. Often physically competes with Casey Jones and is usually depicted as being considerably stronger. Managed to slightly hurt Traag and can contend with giant robots. Comparable to Leonardo), Small Town level+ (Can scale to those that can kill a Kraathatrogon, an alien species that can "shake the city", referring to New York City.), Mountain Level possibly up to Small Island level (Can harm a Chimera who survived a whole mountain blowing up in its face. Can scale to Ho Chan, who gave him powers to create a rather large storm), Large Planet Level+ (Can harm Kraang Subprime, who survived the explosion of a meteor that hit the Technodrome) | Mountain Level possibly up to Small Island level, Large Planet Level+ (Stronger than before as a robot)

Supersonic+ (Has kept up with Tiger Claw, who is able to match Alopex, who sees bullets slow), Hypersonic (Leonardo can keep up with Shredder, who moved 13.226 Meters in the time a lightning bolt strikes), Massively Hypersonic+ (Reacts to Asteroids. At times hit Splinter, who dodged lightning three times. Scales to Leo, who himself reacts to and dodges lightning), Relativistic+ (Can scale to his 1987 self, who can dodge and deflect laser beams), possibly Massively FTL+ (Can deflect Triceratons laser beams that can hit a moving spaceship that can cross interstellar distance in minutes) | Relativistic+, possibly Massively FTL+ (Faster than before)

Superhuman (Can fight for hours without tiring) | Superhuman

A Bō that turns into a naginata, shurikens, Smoke Bombs, Yumi, Arrows | None notable

Extraordinary Genius (Donatello is a scientific genius capable of engineering highly advanced machines. He is also an expert biologist, chemist, and geneticist, as he was able to create the first-ever successful Retro-Mutagen. His intelligence is his greatest asset in battle due to his analytical prowess. He is capable of performing mathematical calculations mid-battle, such as ricochet shuriken at nearby objects and/or surfaces, in order to make them bounce off objects again and again in the exact directions he calculated previously to tag even the most mobile targets. Donatello also possesses expertise in Bōjutsu due to years of training under Hamato Yoshi. In combat, he twirls, swings, and stabs his bō in a manner similar to a spear. As Donatello's fighting style relies more on defense than offense, he specializes in his bō's versatile nature to block as well as a counterattack.)

Less experienced in combat than his brothers