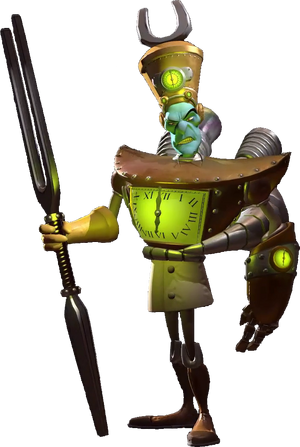 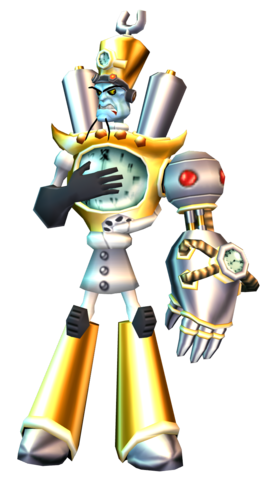 Doctor Nefarious Tropy, referred to as N. Tropy for short, is the self-proclaimed "master of time", an acquaintance of the evil Uka Uka whom debuted in Crash Bandicoot 3: Warped as one of the game's main antagonists. He was revealed to be the creator of the Time Twister, a machine that grants its user the ability to travel to various points in time, both past and future, allowing him, Doctor Neo Cortex and Uka Uka to collect the Power Crystals in order to achieve world domination. Following the events of Warped, throughout which he was defeated by Crash Bandicoot, N. Tropy re-appears multiple times throughout the franchise, being a minor side-villain in Wrath of Cortex, the main antagonist of N. Tranced, a boss and side-villain in Twinsanity, as well as a playable racer in Crash Team Racing, Crash Nitro Kart, and the former's Nitro-Fueled remake.

Powers and Abilities: Superhuman Physical Characteristics, Genius Intelligence, Vehicular Mastery (Able to pilot a fighter plane in hazardous weather. Competent at driving Karts), Healing (Capable of healing himself up to two times after being defeated), Resurrection (Despite his demise at the hands of Crash, N. Tropy returns during the bonus ending of Warped and in numerous sequels to it), Space-Time Manipulation (Describes himself as the "master of time". Can cause time paradoxes just for laughs. Able temporarily slow down time for his opponents using the N. Tropy clock. Reformed a shattered iceberg by rewinding time), Durability Negation, Reality Warping (Can alter the terrain of areas he fights in, as well as de-materialize and reform metal platforms out of thin air by slamming his Tuning Fork into the ground), Clairvoyance, which grants Precognition (Able to peer into the future), Teleportation (Can disappear and reappear shortly after, as shown in his Twinsanity boss fight), Dimensional Travel, Time Travel and Portal Creation (Built the Time Twister Machine, allowing him to reach various points in time, and is the only one who knows how to operate it. Can traverse space-time and spatial dimensions, as well as open portals to and from hyperspace. Presumably transported himself, N. Brio and N. Gin to the Tenth Dimension), Energy Projection, Forcefield Creation (Demonstrated in Twinsanity), Magnetism Manipulation and Electricity Manipulation (Utilizes his magnets to spawn bolts of electricity. Also via Static Orbs), Fire Manipulation (Via his Tuning Fork), Explosion Manipulation and Shockwave Generation (Via Bowling Bombs, Red-Eye Missiles, TNT Crates, and Nitro Crates), Air Manipulation (Via Tornado Tops), Chemical Manipulation (Via N. Brio Beakers), Ice Manipulation (Via Ice Mines and his Turning Fork), Homing Attack and BFR (Via the Warp Orb), Invisibility (Via the Invisibility Power Up), Toon Force, Temporary Invulnerability, Resistance to: BFR, Magic, Transmutation, Chemical Manipulation, Radiation Manipulation, Fire Manipulation, Electricity Manipulation, Energy Manipulation, Size Manipulation, Explosion Manipulation, Vibration Manipulation, Air Manipulation, and Time Manipulation (Via Power Shields and Uka Uka), Acausality (Type 1; Completely unaffected by the time paradoxes he causes)

Attack Potency: At least Multi-Continent level (Practically any one of his attacks can one-shot Crash and even reduce him to nothing) | Low Multiverse level (Stated that he is capable of harnessing the powers of time and space, which consists of at least 5, if not well over 55 or more separate points in time collectively showcased in the form of warp rooms and/or levels in Warped and N. Tranced), likely High Multiverse level+ (Portrayed as at least equal to N. Trance, and fought Crash after he had defeated him. His aforementioned statement should also fall under this tier, as the 5th Dimension is implied to a be a part of space-time, rather than something transcendent to it, as indicated by the use of the following quote: "In his travels through space and time, N. Tropy came across a 5th dimensional being who is a master of hypnotism--the diabolical N. Trance!". Keyword: through, which makes N. Tropy's ability to harness the powers of space and time likely High 2-A, rather than just 2-C) | Multiverse level+ (Can one-shot Crash much like he can in Warped)

Stamina: Below Average (Performing multiple attacks consecutively exhausts him for a few seconds, after which he recovers)

Intelligence: Extraordinary Genius (As the master of time, he seems to possess a great understanding of it, allowing him to engineer and operate complex time-travelling machines such as the Time Twister. N. Tropy is also consistently viewed by Uka Uka as far more competent than Doctor Neo Cortex, a genius scientist with remarkable accomplishments in his own right)

Weaknesses: Fairly easy to wear out.

Retrieved from "https://character-stats-and-profiles.fandom.com/wiki/Dr._Nefarious_Tropy_(Canon,_Character)/ZeroTC01?oldid=80684"
Community content is available under CC-BY-SA unless otherwise noted.