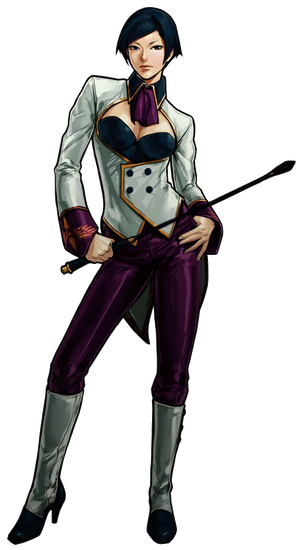 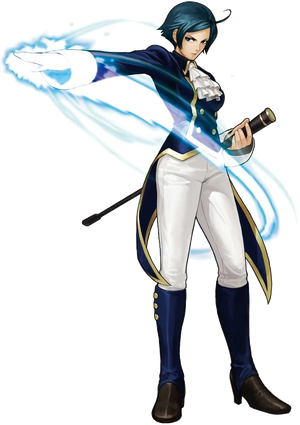 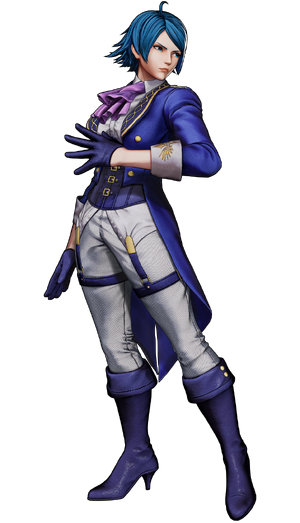 Elisabeth Blanctorche is the last known remaining member of the Blanctorche family, a noble family who had the mission of defeating the mysterious group known as Those From the Past and who all died in a mansion fire during Elisabeth's childhood. During her childhood, she would become friends with the enigmatic Ash Crimson and the two would swear to take down Those From the Past.

When Elisabeth grew up into an adult, she would learn from Duo Lon and Benimaru Nikaido that her friend Ash Crimson had stolen the Yata Mirror from Chizuru Kagura and was seemingly helping Those From the Past to unseal Orochi. Enraged by this news, Elisabeth entered the King of Fighters XI tournament with Duo Lon and Benimaru in order to confront Ash.

After the tournament was over, Elisabeth confront Ash before he revealed that he stole the Yasakani Jewel from Iori Yagami before telling Elisabeth that he was a descendant of the leader of Those From the Past and that he'd stolen the Kusanagi Sword from Kyo Kusanagi during the next King of Fighters tournament then he proceeded to teleport away.

Elisabeth would meet up with both Duo Lon and Shen Woo, two people who wanted to help Elisabeth take Ash Crimson down before entering the King of Fighters XIII tournament. At the climax of the tournament, Saiki would stop time and challenge Elisabeth and her team, however, the fight is interrupted by Ash who prevents Saiki from using The Gate and steals Saiki's soul but Saiki takes over Ash's body, transforming into Dark Ash before battling Elisabeth again. Elisabeth would defeat Dark Ash and Ash would stop Saiki from being able to use The Gate, erasing Saiki by causing a time paradox which made it so Ash was never born, erasing everyone's memories of him except for Elisabeth.

At the climax of the King of Fighters XV tournament, Isla's powers went berserk and unleashed Re Verse, an entity like Verse who teleported Team Ash into a pocket dimension where they fought before Re Verse was defeated and summoned Otoma=Raga, the Goddess of Truth who wishes to destroy the world. Team Ash managed to seal away Otoma=Raga back into the void it came from before they escaped the pocket dimension. Once the tournament was over, Elisabeth and Ash would go their separate ways from Kukri to meet up with Shen Woo and Duo Lon who have remembered Ash's existence.

Name: Elisabeth Blanctorche, "The Controller of the White Light", "Will of Light"

Powers and Abilities: Superhuman Physical Characteristics, Acrobatics, Superhuman Athleticism (Elisabeth is able to flip and can easily jump twice her height), Weapon Mastery (Elisabeth is a master at using her riding crop), Martial Arts (Elisabeth is a master at using the Blanc-styled Martial Arts and the Light Fist Technique), Energy Projection, Light Manipulation (Elisabeth is able to generate and manipulate light with Elisabeth being able to launch out light as projectiles which harm the opponent), Weapon Creation (Elisabeth can create a bow and arrow made of light), Teleportation, Shapeshifting (With Illusion, Elisabeth is able to quickly teleport behind the opponent by turning her entire body into a beam of light), Forcefield Creation, Attack Reflection (With Aurore, Elisabeth is able to create a wave of light which reflect projectiles back at the opponent who launched them), Acausality (Type 1, Managed to remember Ash Crimson despite him being erased from history), Non-Physical Interaction (Is able to interact with Vice and Mature who are ghostly spectres), Statistics Amplification (With MAX Mode, Elisabeth can increase her attack power and her durability), Resistance to Heat Manipulation, Magma Manipulation, Ice Manipulation (Is unaffected by Kula Diamond's ice powers which can instantly freeze the area around her when activated and is unaffected by the extreme heat from Orochi Yashiro's magma filled arena), Fire Manipulation (Is barely effected by powerful fire attacks from the likes of Mai Shiranui, Kyo Kusanagi, Iori Yagami and Krizalid), Electricity Manipulation (Can easily shake off electricity based attacks from the likes of Benimaru Nikaido and Blue Mary), Soul Manipulation (Can survive Orochi and Zero ripping out and destroying his soul), Time Stop (Can fight Saiki in stopped time), Space-Time Manipulation, Reality Warping (Was unaffected by Saiki warping Space and Time), Biological Manipulation (Can survive being hit by Saiki who can instantly kill someone and rot their corpse by touching someone), Power Nullification (Can negate the effects of Ash Crimson's ability sealing technique), Petrification (Can return to normal after being turned to stone by Mukai), Matter Manipulation (Can take hits from Igniz who can casually turn someone into dust just by putting his hand on them), Analytical Prediction (Maxima has stated that the fighters in the King of Fighters tournament never behave the way his analytical data suggests they will), Logic Manipulation (Was unaffected by Otoma=Raga's attacks that control the logic of the world)

Attack Potency: Multi-Universe Level (Managed to defeat Dark Ash who has stated that he has the ability to be able to erase an entire timeline and had complete control over the timeline, Elisabeth is comparable to Kukri who created and maintained a universe sized pocket dimension that he was going to fuse with the main King of Fighters universe and managed to defeat Verse who was going to destroy everything across the past, present and future at the same time, Should be comparable to Dolores who managed to defeat both Re Verse and Otoma=Raga who both have the power to destroy the world with their powers and are both stronger than Verse, Scales to Kyo Kusanagi, Iori Yagami and Chizuru Kagura who all managed to defeat Orochi who created and maintained an entire universe which collapsed upon his defeat, Scales to people like Dolores and the members of Team Orochi who all came from a higher plane after their deaths and resurrection, Scales to Nakoruru who could defeat Shizuka Gozen who created her own realm of existence called Eternity and is able to freely able to manipulate it, Enja and Suija who were able to destroy and create and maintain an entire universe respectively and Yuga the Destroyer who fused the Demon Realm and the Human Realm together), Higher with MAX Mode

Speed: FTL (Can fight on par with other characters who can dodge Elisabeth's light attacks, Can react to characters like Kyo Kusanagi who is able to block all of Orochi's light-based techniques, Scales above Takuma Sakazaki and Bao who were both easily able to intercept a laser fired from the Zero Cannon which fired lasers at a fraction of the speed of light)

Lifting Strength: Class 5 (Can lift Chang Koehan while he is carrying a large iron ball)

Stamina: Superhuman (Can fight against multiple expert martial artists, genetic experiments and godly beings in a short span of time)

Note 2: As of King of Fighters XIV, the Samurai Shodown is canon to the King of Fighters series and as such, Elisabeth would scale to any character in those games and the feats they scale to.