Etihw (エティーウ) is one of the major characters in The Gray Garden. They are the god of their world and can be considered the most powerful being there. In the past, they fought in a war with their Devil counterpart, Kcalb. For reasons unknown, Etihw sealed their devil counterpart Kcalb underground. For centuries he was sealed, until he broke free, beginning a war against angels. During the "Great War," Etihw was one of the central catalysts, being the leader of the Angels. Fighting against their Devil counterpart Kcalb, they slaughtered many demons. In turn, Kcalb slaughtered many angels. When the war ended, Etihw was left with only two of their closest subordinates alive.

Age: Older than the universe

Classification: Goddess of the Grey world

Powers and Abilities: Superhuman Physical Characteristics, Immortality (Type 1, 2, 3, 4, 7, and 9, even lesser beings like humans can endlessly coma back from dying. According to Emalf, she could live on some sort of higher "world", this gets more reinforcement with Lowrie mentions that there are "worlds" above other "worlds". Lesser beings such as mogekos can survive without a head and as zombies), Reality Warping (Stated that she can manipulate reality with her mind ), Creation & Life Manipulation (Created The Grey World and all of its inhabitants), Enhanced Senses (Capable of perciving people despite of them being invisible), Forcefield Creation & Passive Energy Manipulation (Etihw's stones protect the world acting as a barrier/forcefield and control signals within it), Healing (Healed Yosafire completely), Teleportation, Light Manipulation & Non-Corporeal (Talked in a light form ), Sealing (Sealed Kcalb in the deeps of the Earth ), Spatial Manipulation & Time Manipulation (Can establish time and space across many worlds), Clairvoyance (Knew about Kcalb's secret despite him hiding it from everyone else ), Weather Manipulation (Can create rain), Acausality (Type 3, Lesser creatures like King mogeko share a mind across all the other timelines), Plot Manipulation and Subjective Reality (Lesser beings like King mogeko are capable of creating multiple universes, concepts, abstract beings such as mogekos and even rewriting the plot to create alternate timelines), Nigh-Omniscience,  Invulnerability and can cause Status Effect Inducement, Darkness Manipulation, Poison Manipulation, Statistics Reduction, Emphatic Manipulation, Power Nullification , Paralisis Inducement, Sleep Manipulation and has a Resistance to all of them (Since she created everything, this would include Whodas and Grora's clothes as well, their clothes can cause all of these effects and resist them as well ), Void Manipulation (According to Froze, everything was destroyed,despite of that Etihw was able of creating a new universe out of nowhere), Nigh-Omnipotence (Gods are stated to be "omnipotent" in comarisom to all in the multiverse), Freedom, Conceptual Manipulation (Since she created everything in TGG this would include “the darkness” that Wodahs and Grora can manipulate with their clothes. Should scale from King mogeko), Regeneration (High-Godly,  even lesser angels and demons can regenerate from being reduced to nothing), Avatar Creation (As a god she should be comparable to Lord Prosciutto who can use Yonaka as an avatar), Flight, Durability Negation (even weak angels/demons are able to attack souls and ghosts), Acausality (Type 4), Higher-Dimensional Manipulation and Higher-Dimensional Physiology (Naturally exists on a higher dimension), Size Manipulation and Large Size (Varies between 9 and 10, Can grow the size of stars. It should be noted that a normal sea can casually contain 2 universes (Blue sea and Sea of Death). and she exists in a higher dimension), Resistance to Mind Manipulation (As a goddess she should be capable of resisting the effects of the mogeko castle which has various side effects such as messing with Yonaka’s imaginations and triggering flashbacks), Madness Manipulation and Corruption (Lesser beings such as witches can resist the effects caused by the Sea of Death which passively corrupts everything near it, including one's mind and even control it), Death Manipulation, Sealing and BFR (Due to her status as a godess she is hundreds of times above the likes of Wadanohara who managed to break out of the Sea of Death spell meaning that she is unaffected by the effects caused by the spell that covers the Sea of Death which causes all of these effects), Conceptual Manipulation, Existence Erasure (Lesser beings such as humans can resists the effects of the Big Knife). As the creator of everything, she should have all the powers of her creation, which are: Shapeshifting, Summoning (Kcalb can summon Ater and Arbus), Fourth Wall Awareness, Non-Physical Interaction & Soul Manipulation (Yosaf and Co can kill ghosts. And incorporeal beings such as flames), Sound Manipulation (Yosafire can damage foes with a yell), Destruction, Hellfire Manipulation, Confusion Inducement (Rawberry's mere stare can cause confusion on her enemies), Martial Arts, Afterimage Creation & Fire Manipulation (Showed here), Precognition, Laser Emission (Showed here), Ice Manipulation & Magic (Froze has magical ice-based attacks), Holy Manipulation, Cloning, Statistics Amplification, Weapon Mastery, Gravity Manipulation, Causality Manipulation, Matter Manipulation, Antimatter Manipulation, Dimensional Travel, One Hit Kill (Rawberry is capable of killing enemies in one shot with "Strawberry Smile"), Mind Manipulation.

Attack Potency: At least Multiverse+ Level (Created The Grey Garden, which is noted to refer to one of the many parallel multiverses in the verse. Said multiverse contains infinite alternate universes. Vastly superior to Kcalb)

Speed: Immeasurable (According to Emalf, could live on some sort of higher reality, this gets more reinforcement with Lowrie mentions that there are higher realities. Even lesser beings like Met are capable of traveling between universes/worlds with ease (from the Pitch Black World to the Mogeko World and is capable of normally traversing the latter). One of the many aspects of worlds its that they have time, which means traversing them involves traversing space-time thus granting this rating), Nigh-Omnipresent within the Grey World (According to Kcalb, Etihw spends most of her days in a room, yet she is still doing various thing in different places meaning that she can be in multiple places at the same time),

Durability: At least Multiverse Level+ (Took hits from Kcalb, who is likely comparable to her )

Stamina: Godlike (Able to keep up in long battles with Kcalb, which lasted for centuries, perhaps millennia)

Intelligence: Night-Omniscient (The bonus room is stated to be located next to Yosafire's room. Said room contains character bios, bonus scenes, and a lot of things, the bonus room is confirmed to be part of Yosafire Room so it is not some sort of game mechanic. Now Etihw created everything in the Grey Garden, which would include this room as well, meaning that she knew about everything about the story since the very beginning. This gets more reinforcement when she is seen the whole time smiling(even when she was BFR'D by Ivlis into the flame realm) meaning that she was not worried at all. This gets even more reinforcement when in the normal ending Ivlis refers to The Gray Garden events as Etihw's puppet show)

Note: This profile only covers the events of The Grey Garden, this profile might get mayors upgrades when the prequel, the sequel and the remake of TGG come out.

Etihw intervening at the Ending Lake.

A photo during the credits with Etihw in it. 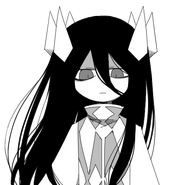 ...held a stoic and emotionless look.

Altair (Re:Creators) Altair's profile (Altair was at 2-B)

Retrieved from "https://character-stats-and-profiles.fandom.com/wiki/Etihw_(Canon)/Lambdawg?oldid=117518"
Community content is available under CC-BY-SA unless otherwise noted.