Gabramelek (가브 메레 렉) is the leader of Pluto, who intends to destroy god and become supreme. He was the one to capture Jin-woo Cha and Min-ha Oh and had them make a contract with him. Gabramelek was formally a human who became a Demon with the unique ability to travel to various parallel universes. Having survived and completed "Hell's Pilgrimage", twice in different bodies as stated by Mephistopheles, he is the strongest demon among his kind. He is shown to be a calculous, manipulative demon who also is very patient, as he always gets what he wants when he wants it

Powers and Abilities: Superhuman Physical Characteristics, Can create spaces where nobody can enter without Gabramelek's permission, Spatial Manipulation (Can endlessly expand the space within his universe, making it seemingly infinite),  Can analyze the power and skills of anyone within his 12 universes , Creation and Black Hole Generation (Using the Particles of his Universe, Gabramelek can create anything. He used the Particle to create a small planet which he then uses as an attack. He then goes on to create an actual Black Hole), Duplication (Can replicate anything he creates, he makes multiple small planets just to show off), Physics Manipulation (Capable of changing the laws of physics within any of his 12 universes), Gravity Manipulation (His control over physics also amplified gravity, completely changing its functionality), Existence Erasure (Seventh Commandment can completely remove anyone from existence that's caught in its path), Time Manipulation (Eighth Commandment grants Gabramelek control over all time, being able to stop, slow, reverse and loop time ), Power Mimicry (Gabramelek can copy anything within his Universe once and only once. His original goal was to copy God's ability to create Life but he decides he'd rather copy Lucifer's power of Armageddon to destroy all things.), Absorption (Absorbed The Big Bang, in addition to other sources of energy within the Universe), Dimensional Travel (His main ability is to travel through universes. Having survived and completed "Hell's Pilgrimage", twice in different bodies as stated by Mephistopheles), Summoning (Can summon his twelve universes), Telekinesis (Lifted with his mind Cha Jin-woo and Oh Min-ha with ease and maintained for some time), Soul Manipulation and Non-Physical Interaction (Lesser demons are capable of manipulating souls), Barrier Generation and Power Nullification (Lesser demons can create barriers and prevent people to leave said places despite their powers), Immortality (Type 7, all soul demons are the souls of dead humans), Possession (Soul demons have the natural ability to remove souls from people's bodies and replace them, they can do this infinitely), BFR (Lesser demons can trap people in their traps with their powers), Body Puppetry (Lesser demons can use objects as a conductor and are capable of freely manipulating them)

Attack Potency: Low Multiverse Level (Created and has power over his main universe and 12 separate universes. Capable of destroying all 12 of his created universes through sacrifice)

Speed: Immeasurable (He is transcendental being, said kind of beings are stated to be living universes. Was capable to move after he destroyed the Tower of Babel which is basically what makes time exist)

Durability: Low Multiverse Level (Can easily destroy all of his twelve universes without getting affected)

Intelligence: Very clever, extremely manipulative due to him deceiving and luring Archangel Michael into their fake hideout, Planned to kill God

Weaknesses: His powers only work in his world. When he uses his time control he cannot use any of his other powers. All soul demons are weak a certain element. 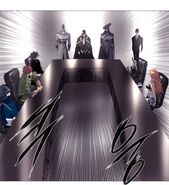 The Pluto meeting held by Gabramelek. 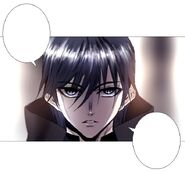 Gabramelek decided to put his plan into motion.

Gabramelek pushing through Hell.
Add a photo to this gallery

Retrieved from "https://character-stats-and-profiles.fandom.com/wiki/Gabramelek_(Canon)/Lambdawg?oldid=91136"
Community content is available under CC-BY-SA unless otherwise noted.