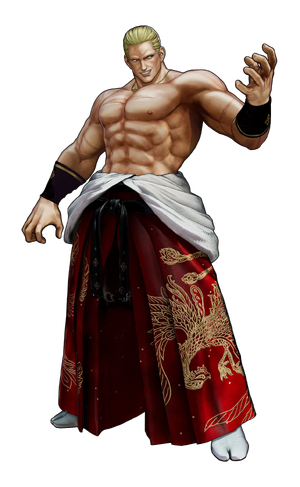 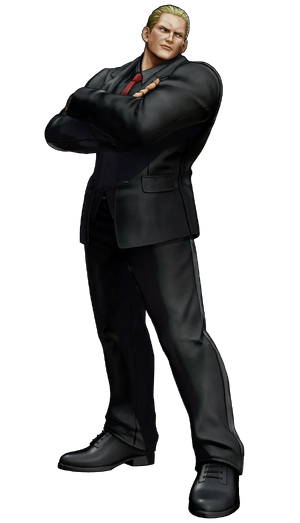 Geese Howard is the CEO of the Howard Connection Agency and is the head of the South Town mafia. He was originally a student under Tung Fu Rue until Geese left when he wasn't given the secret scroll of Hakkyokuseiken which were given to Geese's friend, Jeff Bogard.

Geese would head to South Town to defeat Mr. Big and take over his criminal empire. Once he was in charge, Geese would find his friend, Jeff and kill him and steal the secret scroll from him.

Ten years later, Geese would have to fight both of Jeff's sons, Terry and Andy who would manage to defeat him after they won his King of Fighters tournament.

After his defeat, Geese wished for Terry to be eliminated so he signed up Billy Kane to join The King of Fighters '95 tournament alongside the ninja, Eiji Kisaragi and the mysterious Iori Yagami, however, Billy was unable to kill Terry but would see for himself the power of Orochi which he would inform Geese of.

Once hearing about the Orochi, Geese would investigate it himself by manipulating Geese's former underling, Mr. Big and his half-brother, Wolfgang Krauser into forming Team Bosses and joining The King of Fighters '96 tournament, however, Geese would learn that he could not use Orochi's power due to him not being a member of the Orochi Bloodline. After escaping an assassination attempt by Mr. Big, Geese would leave.

During the King of Fighters XIV tournament, Geese would recruit a new Butler named Hein and he and Billy would join Geese to form Team South Town in order to learn about the mysterious being that appeared in the predictions of the Jin Scrolls, after learning that Verse was incomplete so he planned to enter the King of Fighters XV tournament alongside Billy and notorious criminal Ryuji Yamazaki so they could face the completed Verse and whatever would come after it.

Powers and Abilities: Superhuman Physical Characteristics, Acrobatics, Superhuman Athleticism, Martial Arts (Geese is a master of the martial art known as Hakkyokuseiken as well as being a highly trained practitioner of Aiki-Jujutsu), Chi Manipulation, Energy Projection (Geese can use his Chi to form projectiles like his Reppuken), Electricity Manipulation (With Thunder Break and Raimeigōha Nage, Geese can call down lightning bolts from the sky to strike his opponent and electrify the ground, With Raigō Reppuken, Geese launches out a projectile filled with electricity from his hands to the opponent in order to electrify them), Air Manipulation (Geese can launch waves of cutting winds to slash his opponent such as variations of his Reppuken), Absorption, Empowerment (Geese can absorb Chi from the environment around him to use as projectiles or to become stronger), Extrasensory Perception (Is able to sense the chi, life force and will to fight from those around him), Limited Power Mimicry (After his battle with Ryo, Geese incorporated some of the techniques of Kyokugenryu Karate into his own fighting style), Immortality (Type 3), Regeneration (Low-Mid, With the Phoenix Scroll, Geese was able to regenerate the injuries he sustained after being thrown off of Geese Tower by Terry Bogard), Non-Physical Interaction (Is able to interact with Vice and Mature who are ghostly spectres), Statistics Amplification (With MAX Mode, Geese can increase his attack power and his durability), Resistance to Heat Manipulation, Magma Manipulation, Ice Manipulation (Is unaffected by Kula Diamond's ice powers which can instantly freeze the area around her when activated and is unaffected by the extreme heat from Orochi Yashiro's magma filled arena), Fire Manipulation (Is barely effected by powerful fire attacks from the likes of Kyo Kusanagi, Iori Yagami, K' and Krizalid), Electricity Manipulation (Can shake of electricity based attacks from the likes of Benimaru Nikaido and Blue Mary), Soul Manipulation (Can survive Orochi and Zero ripping out and destroying his soul), Time Stop (Can fight Saiki in stopped time), Space-Time Manipulation, Reality Warping (Was unaffected by Saiki warping Space and Time), Biological Manipulation (Can survive being hit by Saiki who can instantly kill someone and rot their corpse by touching someone), Power Nullification (Can negate the effects of Ash Crimson's ability sealing technique), Gravity Manipulation, Black Hole Generation (Can survive being sealed into a black hole by Zero One), Petrification (Can return to normal after being turned to stone by Mukai), Matter Manipulation (Can take hits from Igniz who can casually turn someone into dust just by putting his hand on them), Analytical Prediction (Maxima has stated that the fighters in the King of Fighters tournament never behave the way his analytical data suggests they will), Logic Manipulation (Was unaffected by Otoma=Raga's attacks that control the logic of the world)

Attack Potency: Multi-Universe Level (Is comparable Terry Bogard who was able to defeat both Kukri who created and maintained a universe sized pocket dimension that he was going to fuse with the main King of Fighters universe and Orochi who created and maintained an entire universe which collapsed upon his defeat, Scales to Shun'ei who was able to defeat Verse who was going to destroy everything across the past, present and future at the same time, Scales to people like Dolores, Ash Crimson and the members of Team Orochi who all came from a higher plane after their deaths and resurrection, Scales to Nakoruru who could defeat Shizuka Gozen who created her own realm of existence called Eternity and is able to freely able to manipulate it, Enja and Suija who were able to destroy and create and maintain an entire universe respectively and Yuga the Destroyer who fused the Demon Realm and the Human Realm together), Higher with MAX Mode

Speed: FTL (Can dodge attacks from Elisabeth Blanctorche who uses light as her main method of attack, Can block all of Orochi's sunlight based attacks, Scales above Takuma Sakazaki and Bao who were both easily able to intercept a laser fired from the Zero Cannon which fired lasers at a fraction of the speed of light)

Lifting Strength: Class 5 (Can lift up Chang Koehan while he is carrying a large iron ball)

Stamina: Superhuman (Can fight against multiple expert martial artists, genetic experiments and godly beings in a short span of time)

Intelligence: Gifted (Is a highly trained martial artist who has spent his entire life training and has been invited to multiple iterations of the King of Fighters tournament, Regularly defeats martial artists who have decades of combat experience such as Tung Fu Rue, Chin Gentsai and Takuma Sakazaki)

Weaknesses: MAX Mode only lasts so long, Geese can only use the Phoenix Scroll if he is holding it