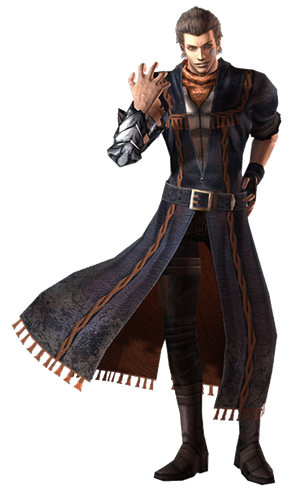 Classification: Drifter, The (Unwilling) Protector of the God Hand

Powers and Abilities: Superhuman Physical Characteristics, Martial Arts (Knows over 100 different martial arts moves), Accelerated Development (Became one hundred times stronger in less than a day, Quickly learned over 100 martial arts techniques), Limited BFR (Can kick people so hard that they fly into the horizon, Can send demons back to Hell), Emotional Manipulation, Statistics Reduction (Can grovel at the opponent's feet to make them laugh and make it so they are easier to fight), Healing, Air Manipulation, Fire Manipulation, Energy Manipulation, Energy Projection, Weapon Creation, Explosion Manipulation (With God Hand techniques Gene can control fire, air, create weapons, heal himself, make opponents explode from the inside out and make baseball bats and baseballs out of energy), Invulnerability, Statistics Amplification (When the true power of the God Hand is unleashed then Gene becomes invisible and becomes both faster and stronger), Mind Manipulation, Mind Control (Should be able to mind control people like how Azel was able to do to Oliva, Managed to temporarily hypnotise Belze), Sealing (The original weilder of the God Hands sealed away Angra in the past and Gene managed to seal him away in the present too), Fourth Wall Awareness, Resistance to Transmutation (Can turn back into a human after being turned into a dog)

Attack Potency: City Level (Is far stronger than the fodder demons can create a massive storm just with their mere presence alone) | Large Mountain Level (Is able to beat the demon forms of the Four Devas which have been stated to be one hundred times stronger than their base form), Much Higher with the God Hand (Fought evenly with Azel who is much stronger than the Four Devas), Can negate durability with Daisy Cutter | At least Large Mountain Level (Defeated Angra whose summoning created a massive storm), Can negate durability with Daisy Cutter

Lifting Strength: Superhuman (Can effortlessly lift up a big metal sign and an oil barrel filled with oil that is twice his size)

Weaknesses: Gene can't use the full power of the God Hand for too long (Only a few seconds), Gene's cocky attitude leads to him underestimating his opponents which is how he lost his arm

Key: Beginning of Game | End of Game | With both God Hands