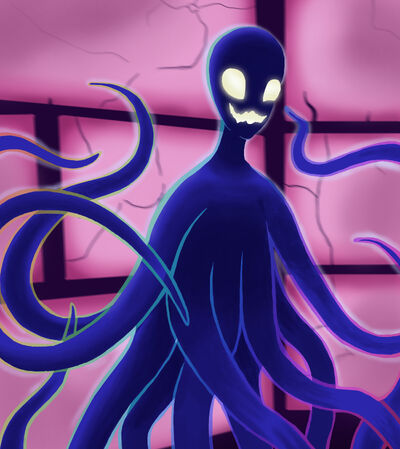 Geryuganshoop (ゲリュガンシュプ, Geryuganshupu) is an elite member of the Dark Matter Thieves - a group of intergalactic space pirates traversing the universe - and a minor villain introduced the One-Punch Man webcomic, manga and anime series' Alien Conquerors arc. "He" was shown to be the right-hand and one of the top lieutenants of Lord Boros, and was mostly seen observing the status of the invasion on Earth and his boss' ship. However, he ended up being found and defeated by Saitama with ease.

Geryuganshoop has demonstrated a level of overconfidence, referring to himself as the greatest telekinetic power in the universe, and he can come off as intimidating when he wants/needs to. Despite that, he tends to lose his cool upon being endangered, which is clear when Saitama broke into Lord Boros' ship. Geryuganshoop was shown to be immensely loyal to Boros, and has demonstrated that he definitely lives up to his high ranking status, actively commanding the Dark Matter Thieves.

Credit to NightmareRoach for the fanart used.

Attack Potency: At least Mountain level+ (Using his telekinesis, he threw a number of rocks at speeds near that of light, exerting this much energy in the process)

Speed: Relativistic+ (His attacks have been directly stated to be near the speed of light)

Intelligence: Likely Above Average (Is shown to be a calculating and capable leader whilst he is composed, managing Lord Boros' ship and commanding the Dark Matter soldiers almost constantly)

Weaknesses: Is somewhat overconfident, and he can fairly easily lose his cool in dangerous situations. Despite that, he is still willing to fight seriously and competently.

Retrieved from "https://character-stats-and-profiles.fandom.com/wiki/Geryuganshoop_(Canon)/ZeroTC01?oldid=91743"
Community content is available under CC-BY-SA unless otherwise noted.