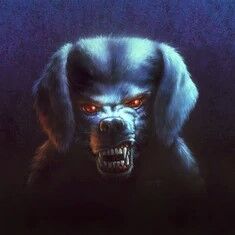 The Ghost Dogs are a pair of evil spirit canines that serve as the the main villains of the Goosebumps book The Barking Ghost, haunting Cooper, stalking him, howling at night and he is the only one that can see them. They want to swap bodies with a human as they were once criminals on the run until two strange dogs pushed them into the changing tree and have been stuck as dogs for generations. Their plan is to swap bodies by getting their victims inside the changing tree with them in order to swap bodies. They also had their own TV episode and in various pieces of merchandise. Physically they are large black Labrador Retrievers with glowing red eyes and sharp teeth.

Name: The Ghost Dogs, Grimm and Scratch (As humans)

Gender: Were both male in their lives

Age: Said to be around for generations

Powers and Abilities: Superhuman Physical Characteristics, Enhanced Senses (Normally dogs possess superior senses then humans), Non-Corporeal (Are implied to be ghosts), Immortality (Type 7), Stealth (Normally leave no traits of where they were, such as when they leave behind no foot prints), Body-Swapping with the changing shack (Can swap bodies with their victims if they are in the shack with their victims), Portal Creation (As seen here), Teleportation (Often appear and disappear in both the book and episode), limited Telepathy (The original pair are comparable to Cooper and Fergie when they swapped bodies and were capable to communicate to each other with their minds), Goosebumps Monster Physiology

Attack Potency: Street level (Labrador Retrievers are capable of overpowering humans with ease and maul deer. Most dogs are this level), possibly Wall level (Can potentially rip a leg off)

Intelligence: Average (Were humans in life that were criminals on the run. Shown to be capable of speech. Knows how to operate the changing tree)

Weaknesses: Can only swap bodies with the changing tree, otherwise none notable