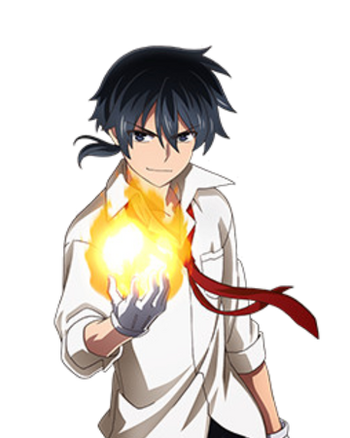 Glenn Radars (グレン＝レーダス, Guren Rēdasu) is the protagonist of the Akashic Records of Bastard Magic Instructor series. He becomes the substitute teacher at the age of 19 in Sistine Fibel's class, after the disappearance of her previous teacher, Huey. He has a past in the imperial military that not many people, where he served the queen and was known as an assassin. While spending 4 years of his life as an assassin, he grew a destain for Magic, believing it only brought death and destruction. After being forced to become a teacher by his sensei, Celica, Glenn realized Magic isn't all bad and can be used for good.

Speed: At least Infinite (The Corrior of Stars is repeatadly stated to be an infinite space. Glenn has crossed the corridor alongside Rumia, Sistine and Re=L.), likely Irrelevant (Superior to Rumia, who can move in a place with no concept of time, and no concept of up, down, left and right) | Irrelevant

Stamina: Above Average; Stamina tends to depend on how much mana a character has, and males have comparatively less mana then females do. However Glenn has shown to fight other competent magicians for hours non-stop. | Unknown, at least above Average

Intelligence: Supergenius; Although he can come off as a good for nothing professor, Glenn is a master assassin in the imperial army. A military mage with advanced hand to hand combat knowledge, surpassing the likes of even Celica, the greatest magician and most powerful being in the world behind The Demon Lord. Glenn is the professor at the highest university of magic in the world, reccomended by Celica herself. Glenn has fundamental understanding of Magic at the highest levels, with magic being the study of science, mathematics, meta-physics and the world itself. Glenn understands the consciousness and how to control it better than magicians who are stronger than him, which is why he can find a way to defeat people dimensions above him in strength. The consciousness is a realm that is devoid of all concepts, and he can use magic to manipulate the consciousness to his will. What makes Glenn special is that despite having terrible affinity for magic, he is smart and will always find a way to win. Glenn created the "Glenn-bot", a machine comparable to him in knowledge and power.

Weaknesses: Glenn is somewhat lazy in the first half of the series although he takes things seriously later on. Extinction Ray uses a lot of stamina. His revolver only destroys the soul and conciousness when shot at point blank range, otherwise it is just a regular bullet with planetary AP, and wont destroy the soul and consciousness. Glenn has a bad affinity with magic, and worse stamina than most magicians, although it is only below average relative to the verse and its characters | Cannot use all of Celica's abilities to their full extent due to his lack of magic capacity

Military Grade Abilities are stated to be far more powerful than basic abilities. They are divided into three classifications. C Class, B Class and A Class. Even a C Military spell is more powerful than the strongest of a non military spell. They are stated strong enough to bring cataclysmic destruction and even destroy the earth and further beyond

Note 1: Some minor abilities from volume 4 have used anime scans, as volume 4 was not translated for whatever reason.

Note 2: Although it is stated men have worse mana and stamina than average, it is just average relative to the verse itself. The most average magician, male or female in the verse can fight for up to an hour at least.

Note 2: The reason I removed the High 1-A key for Glenn upon his blessing is because it is stated he doesnt have the capacity to take all of Celica's powers. It was more so implied he gained some of her abilities, and even then not to their full extent, although he still has abilities that can affect people on Celica and the Demon Lords level, such as Fools World and Extinction Nova. It is also stated early on that Glenns magic capacity is lower than some of his students, so his AP wouldn't scale above them either. What makes Glenn special is his ability to adapt and outsmart/outskill opponents dimensions stronger than him. This may change back to High 1-A in the latest chapters, but for now there's nothing concrete.

Key: Base | Blessed by a True God