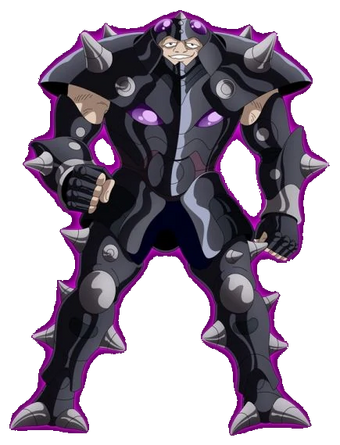 Golem Rock is a member of Hades' Specters who tried to stop Dragon Shiryu and Cygnus Hyoga before being quickly defeated.

Superhuman Physical Characteristics, Immortality (Type 3 & 4), Regeneration (Mid-Godly, Scales to Shakka who regenerated his entire body after his body soul was destroyed), Resurrection, Martial Arts, Chi Manipulation, Matter Manipulation, Heat Manipulation, Extrasensory Perception (Can sense the Cosmo energy of others), Non-Physical Interaction, Soul Manipulation (Saints are able to interact with and directly harm souls), Energy Projection, Reactive Evolution (Once a Saint has seen an attack once then it won't work from then on), Telepathy, Pressure Point Strikes (Can hit the vital points that correlate to the constellations that the person was born under), Enhanced Senses, Telepathy, Teleportation, Reactive Power Level (Every time a Saint with the Seventh Sense gets knocked down, he becomes stronger when he stands back up), Space-Time Manipulation (Can create Big Bangs), Dimensional Travel (Is comparable to Andromeda Shun who managed to attack while in a separate dimension), Instinctive Reactions (Scales to Seiya who still managed to fight a battle while in a coma), Probability Manipulation, Statistics Amplification (Someone with the Seventh Sense is able to create Miracles which make the impossible possible and can be used to boost the user's stats), Earth Manipulation

Attack Potency: Multi-Universe Level (Each Specter has the Eighth Sense and as such is stronger than the Gold Saints including Taurus Aldebaran and Aries Mu before they unlock their Eighth Sense)

Speed: Immeasurable (Is able to move in Hell which has been stated to beyond Space and Time which has all the souls of everyone who has ever died including people in the future)

Retrieved from "https://character-stats-and-profiles.fandom.com/wiki/Golem_Rock_(Canon)/Unbacked0?oldid=143446"
Community content is available under CC-BY-SA unless otherwise noted.