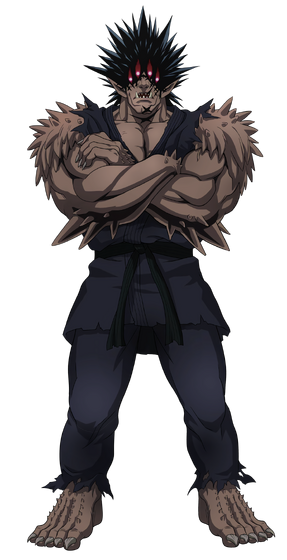 Gouketsu was an incredibly powerful monster sent by Psykos to infiltrate the "Super Fight" martial arts tournament, destroying anyone in his way. Right as the competition ended with Suiryu winning due to Saitama being disqualified, Gouketsu interrupted the victory celebration and used his minions to hold civilians hostage. It was revealed that he intended to turn everyone in the stadium into monsters. Gouketsu was a human martial artist and the champion of the first Super Fight eleven years ago. He was defeated and captured by the Monster Association. Given a chance to join, he ate a monster cell and became an exceptionally powerful monster. After defeating Suiryu, Max, and Snek, he was hunted down by Saitama and killed.

Attack Potency: At least Island level (His punch caused a shockwave that dispersed clouds. Genos, who has witnessed an all-out battle between Superalloy Darkshine and Carnage Kabuto in the VGS, believed that Gouketsu was more powerful than the latter. Effortlessly overpowered Monster Bakuzan), possibly higher (Genos found his strength reminiscent of Saitama and believing he needed to team up with S-Class Heroes to defeat Gouketsu as safely as possible, despite witnessing him nullify most of the meteor's impact energy, which would destroy Z-City and cities surrounding it, albeit still believed that Saitama is superior)

Speed: At least Sub-Relativistic+ (Far faster than Suiryu. One-shot a damaged Post-G4 Genos before he could react. Implied by Genos to be superior to Carnage Kabuto)

Intelligence: Likely Above Average (A master martial artist, who won the first Super Fight tournament and was considered one of the greatest martial artists of all time)