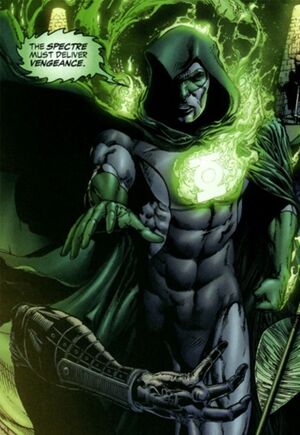 Harold "Hal" Jordan is the first human inductee of the Green Lantern Corps, as well as one of the founding members of the Justice League of America. He was born in Coast City to Jessica and Martin Jordan, having idolised his father. However, at a very young age, tragedy struck as he was forced to witness his greatest fear, his father losing his life to a plane crash right before his eyes. Despite Martin's death and his family's worries, Hal went on to follow in his father's footsteps, joining the United States Air Force at 18 years of age. Many years later, a dying member of the Green Lantern Corps named Abin Sur crash-landed his ship on Earth. Acknowledging his indomitable will and ability to overcome fear, Sur's ring chose Hal as his replacement, bestowing upon him the role of Green Lantern. As a result, it was his duty to fulfil his role as a galactic police officer, serving and guarding all life in Sector 2814 with his own.

Attack Potency: Universe level+ (Comparable to the likes of Superman, The Flash, Wonder Woman, etc. Restrained Lex Luthor in his Warsuit, and according to the latter, Green Lantern rings are extra-dimensional weapons. Able to overpower and restrain Lobo, who can trade blows with the likes of Superman and Martian Manhunter. Caused reality itself to bend in his clash with Sinestro. One-shot Amazo. Greatly injured Mongul. One-shot a Kryptonian. Took out a multitude of Red Tornado androids. Destroyed Cyborg Superman's Willhunters) | Low Multiverse level (Once stopped Superman cold. His ring was stated by Superman to defy all quantification, with an alien who copied his body and stole his ring nearly killing him) | At least Outerverse level (His ring fused with a Mother Box, while Mother Boxes were stated to have access to the energy of The Source. Said to be unbound by time and space. Became the very embodiment of light, and thus he exists everywhere throughout creation) | High Outerverse level (Created his own reality layering over that of The Presence, including his own version of the Sphere of Gods. Can channel the energy and power of The Presence using The Logoz, allowing him to remake all of creation. Able to overpower the beliefs of humanity, which can change creation by rewriting Destiny's book and even somewhat affect The Presence. Connected to the Divine Presence, which contains and surpasses everything in creation)

Lifting Strength: Immeasurable (Supported the weight of The Spectre, whose body contains eternity, a term typically used to refer to unending time) | Immeasurable (Comparable to the likes of Superman) | Irrelevant | Irrelevant

Weaknesses: His ring requires charging from time to time. Losing his concentration due to illusions causes his power to dwindle. Unable to utilise his ring if he is overcome by fear.

Retrieved from "https://character-stats-and-profiles.fandom.com/wiki/Green_Lantern_(Canon,_Hal_Jordan)/ZeroTC01?oldid=93705"
Community content is available under CC-BY-SA unless otherwise noted.