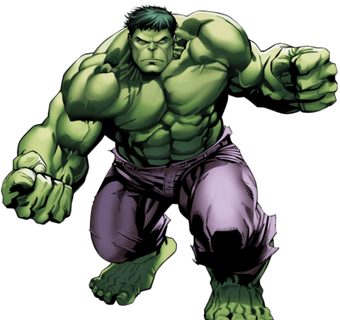 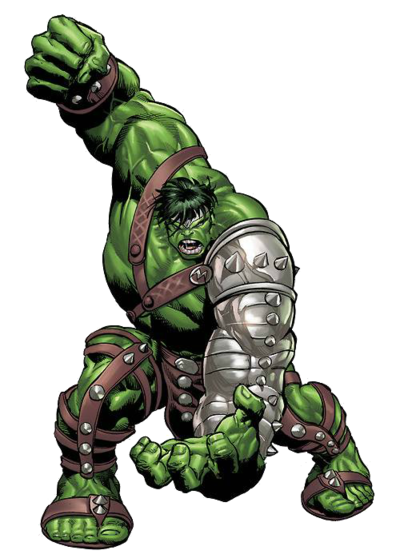 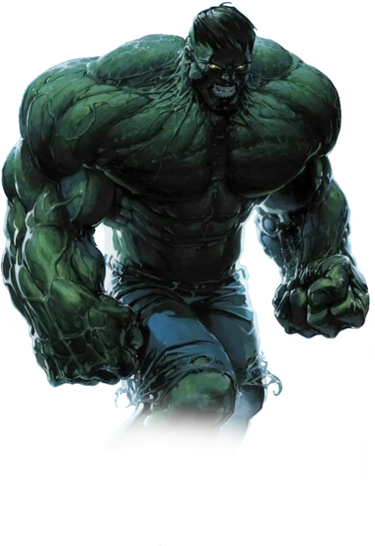 The Hulk is a fictional superhero appearing in American comic books published by Marvel Comics. The character was created by Stan Lee and Jack Kirby and first appeared in The Incredible Hulk #1 (May 1962).

Throughout his comic book appearances, the Hulk is portrayed as a large green humanoid that possesses immense superhuman strength and great invulnerability, attributes that grow more potent the angrier he becomes. Hulk is the alter ego of Bruce Banner, a socially withdrawn and emotionally reserved physicist who physically transforms into the Hulk under emotional stress and other specific circumstances at will or against it; these involuntary transformations lead to many complications in Banner's life. When transformed, the Hulk often acts as a disassociated personality separate from Banner.

Over the decades of Hulk stories, the Hulk has been represented with several personalities based on Hulk and Banner's fractured psyche, ranging from mindless savage to brilliant warrior, and Banner has taken control of the Hulk's form on occasion. Banner first transforms into the Hulk after being caught in the blast of the gamma bomb he invented while saving Rick Jones, a youth who had wandered onto the testing range.

Superhuman Physical Characteristics, Genius Intelligence (Can create incredibly advanced technology), Martial Arts, Hacking (As shown here), Multiple Selves (Type 1), Immortality (Types 1 & 4. Will end up in the Below-Place after dying from which he can quickly revive himself through the Green Door should he choose to do so), Enhanced Senses (Can accurately sense temperature and air quality), Extrasensory Perception (Can sense gamma radiation), Transformation, Limited Telekinesis (Hulk broke a glass while Bruce was in control), Preparation (Made the following weaponry while isolated on an island) and Resistance to Possession (As a student of Advanced Mind Control and Hypnosis, prevented Crusher Creel from entering his mind) and Radiation Manipulation. Optional Equipment grants him Technology Manipulation (Using the BannerTech Virus and Gamma Dome. Can also jam radios and satellites), Energy Projection (Using the Calypso Offensive Satellite and certain weaponry), Electricity Manipulation (Using an Old Power Taser), Ice Manipulation and Non-Physical Interaction (Using Bannertech Ice Eight Agent), Explosion Manipulation, Fire Manipulation and Magma Manipulation (With Gamma Island Weaponry), Information Analysis (As shown here, Can scan someone for being an android, Possesses a Gamma Ray Detector), Paralysis Inducement and Limited Biological Manipulation (Possesses a machine which can cause strokes), Summoning (Can access equipment within his lab using Pocket Teleporter), Statistics Amplification (Using forcefields, can amplify his statistics to throw Wolverine), Forcefield Creation (Possesses forcefields around his body which absorb both radiation and old power), Nanotechnology (Can use Bannertech Nanoparticles which disable all firearms and perform repairs), Illusion Creation (Made a hologram to mimic Galactus), Gravity Manipulation (By using BannerTech Molecular Repulsion), Teleportation (By using the BannerTech teleporter), Time Travel and Light Manipulation (By using the T-Gun) and Limited Healing (Constructed a Catalytic Converter which can neutralize carcinogens.)

Superhuman Physical Characteristics, Self-Sustenance (Type 1), Immortality (Types 1, 3 & 4. Will end up in the Below-Place after dying from which he can quickly revive himself through the Green Door should he choose to do so), Regeneration (High-Mid for practical combat purposes, Mid-High over time. Very quickly reassembled himself at will after being cut into many pieces. His future self, the Maestro, took several years to recover after being reduced to powder), Resurrection via Green Door, Multiple Selves (Type 1; became able to switch between his personas and they can work together to be "the strongest and smartest one there is"), Enhanced Senses & Extrasensory Perception via Mystic senses (He can perceive spirits and can know if he's being watched as well as feel, hear, and see them.), Berserk Mode and Rage Power (His strength and general power levels are directly proportional to his anger, or, as the old saying goes, "The madder Hulk gets, the stronger Hulk gets"), Can create massive shock waves with thunderclaps, Absorption (Can absorb gamma radiation. Can absorb dark magic and dimensional nexus energies to grow stronger), Adaptation (His body has adapted to breathing underwater), Non-Physical Interaction (Can touch energy as if it were solid and tangible), Information Analysis (can discern how magical objects work), Reactive Evolution and Self-Power Modification. His powers are directly affected by his psyche. All of his powers are manifestations of his psyche with the Gray, Green, and Normal forms being representative of his ID, Superego, and Ego respectively. Gamma Rays bring out subconscious desires as powers which dictate their capabilities), Telekinesis (Once developed telekinesis), Power Nullification and Resistance Negation (His radiation negates invulnerability, including invulnerability to Mind Manipulation), Limited Radiation Manipulation (Can release massive bursts of gamma radiation capable of leveling cities, involuntarily, when enraged.)

Same as before, with Immortality (Type 2), Extrasensory Perception (Can see the naked souls of men and smell the lies in their hearts hidden even from themselves), Absorption (Can absorb Gamma Radiation at will), Body Control (Can move his disconnected body parts), Resistance to Illusion Creation (Noticed that he and Hawkeye weren't in a real hospital) and Fear Manipulation (Nightmare was unable to make him afraid with his powers.)

Attack Potency: Multi-Universe Level (Hulk is capable of channeling the power of two Universes. Also comparable to Hyperion, who withstood two Universes colliding into him.) up to Low-Multiverse Level with Rage Boosts (Comparable to his Durability) | Multiverse Level (More powerful than he has ever been as Savage Hulk. Stalemated a serious Sentry, Who is stated to have Stalemated Galactus. Sentry may be portrayed inconsistently however, he is always shown to be well above even a peak Hulk) | Multiverse Level (Devil Hulk, at his peak. Could blast away TOBA's Avatar, which, while not his full power in anyway, and was done to buy time. TOBA's avatar is still considered to be far stronger than Mephisto. Who could take attacks from every Ghost Rider in history, with little more than a black eye. With an unrestricted Ghost Rider being considered powerful enough to take on World War Hulk, likely making Devil Hulk over 100 times stronger than World Breaker)

Speed: Infinite (He has consistently kept up with Thor, Hyperion, and Silver Surfer. All of whom can cross the Universe in a short timeframe. With the Universe being stated Infinite.) | Infinite (Matched Sentry) | Infinite

Stamina: Extremely High (Can fight entire teams for extended periods of time. As Worldbreaker Hulk, he could retransform into Hulk moments after being knocked out of it by Sentry.)

Range: Extended melee range due to his size, Universal via Thunderclap (can shatter dimensions)

Intelligence: Below Average as the Green Hulk. Not very bright but capable of surprisingly clever battle tactics. Average as World War Hulk. He learned how to control his rage with the help of Hiroim, and had some experience as a leader. At least Above Average as Devil Hulk. He holds the ability to analyze situations and reach conclusions and solutions successfully using "unreason and magical thinking". When in an intelligent state of mind, he is proficient in martial arts, due to training from Iron Fist. Doctor Doom has stated that Banner is superior to him in some fields.

Standard Tactics: Despite his primal exterior, Dr. Banner is still able to control Hulk's actions to some extent, as such Hulk will not kill his opponents or use excessive force if he doesn't require it.

Weaknesses: If he is not sufficiently enraged, he transforms back to Bruce Banner (although he has shown the ability to maintain the transformation in varying emotional states), and can be knocked out depending on the circumstances. In his Immortal Hulk incarnations, he reverts to human form when exposed to bright day sunlight. His powers are heavily tied to his psyche, and as such are subject to change. For example, a fear of harming others as the intelligent Hulk made it so that he decreased in power with anger for some time. His powers also at one point became only usable at night due to his subconscious fear of exposure and the judgment of others. As Devil Hulk, he prevents himself from getting too enraged to not lose control, becoming the Savage Hulk if he gets too angry as a safety mechanism, which decreases his strength. He's repelled by things related to the The One Above All Others

As stated in the profile itself, Devil Hulk does not scale even remotely to TOBA's full power, only his avatar, which even then required his full strength and merely temporarily held him back. He also said he beat Franklin Richards and Galactus, however it is never shown. Given how he "beat" Metatron by absorbing his soul. It's likely the same thing happened with them, and even then, TOBA was possessing him. Thus, these feats do not scale to Hulk himself. The fact TOBA can possess the Hulk despite the Latters resistance proves that Hulk cannot and does not scale to TOBA at full power.

Due to the Inconsistency of Celestial durability, I do not scale Sentry or Mephisto to them. As more often than not, even low tier Celestials are FAR above their level of power.

Sentry stalemating Galactus, while impressive, isn't quite what it seems. For one he had help from Nate Grey, an equally powerful being. And two, he was most likely fighting a starved Galactus, as he had come to Earth to consume it. So, while he should be Multiversal due to massive upscaling. His exact power is hard to determine and depends heavily on his mental state.

In regard to Worldbreaker Hulk vs Sentry. While Hulk did state he was holding back during the fight. It was also stated that Sentry wasn't going all out either. Making it impossible to accurately get an exact placement for his power.

In reagards to Hulk vs Doctor Strange. While Zom is a threat comparable to the likes of Dormmamu, this is only for a full power Zom, the Zom strange had absorbed to fight Hulk was nowhere near full strength. In fact, immediatley after Zom is seperated from Strange, it's stated he is basically completely depleted. So no, Hulk does not scale to Zom in any way shape, or form.

Hulk did not destroy the entirety of the Dark Dimension, just a small, incalculable portion of it. He does not scale to Dormmamu or Umar.