This article depicts an OC or iteration of an existing character in an existing fan series based on an existing series (e.g. Israphel from The Cult of Israphel, Seelkadoom from Sonic RPG, Mario from Power Star, Turbo Mecha Sonic from Super Mario Bros. Z, Betty from Glitchtale, Error Sans, etc). Therefore, do not take this page 100% serious as it's not real and does not depict the actual version of the character, verse or weapon (if not fully fictional and not based on anything). If not an OC or completely fictional item/verse and you're looking for the actual character, then instead go to the canon page. 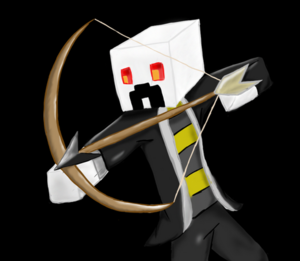 Israphel is the leader of the Cult of Israphel in the popular Minecraft roleplaying series, Shadow of Israphel, which ran from 2010 to 2012 on The Yogscast, and the main antagonist of the series.

Israphel was born on January 1, 1905, possibly in the town of Terrorvale. Israphel's father was the head of Terrorvale's church, Reverend John. In his youth, Israphel worked for the esteemed Professor Grizwold, who played a key role later in the lore of YouTube series. At one point whilst working for Grizwold, the professor accidentally summoned a Creeper which killed the young Israphel.

But this was not the end of the story. Israphel was resurrected by a dark force and bestowed with several dark powers, and set off to conquer the Minecraft world.

Classification: Undead, leader of the Cult of Israphel, the Dark Lord

Powers and Abilities: Superhuman Physical Characteristics, Weapon Mastery, Non-Corporeal, Teleportation, Reality Warping (Israphel seems to have massive control over the continuum of time, and was directly implied to have caused a neverending summer with unusually high temperatures), Time Manipulation, Mind Control, Lightning Manipulation, Dream Manipulation (Invaded Enoch and the King's dreams), Fear Manipulation, Light Manipulation, Resurrection, Necromancy / Zombification, Madness Manipulation (Type 3), Weather Manipulation, Regeneration (Mid-High. Can regenerate after self-destructing), Memory Manipulation (Israphel may be able to affect people's memories, given that Peculier somehow did not recognize him in Terrorvale, and was only able to remember his past with him after being freed for a time), Immortality (Types 1 and 7), Duplication of others, Explosion Manipulation, Possession, Magic, Creation, Power Granting, Summoning and Disease Manipulation.

Attack Potency: At least City Block level (Created a storm in Part 15: The Battle of the Breach that enveloped at least part of a small desert. Effortlessly destroyed the Yogcave, the size of which far exceeded a building)

Intelligence: At least Above Average (A skilled strategist, leader and manipulator)

Weaknesses: None notable so far

Retrieved from "https://character-stats-and-profiles.fandom.com/wiki/Israphel_(Canon)/Withersoul_235?oldid=135538"
Community content is available under CC-BY-SA unless otherwise noted.