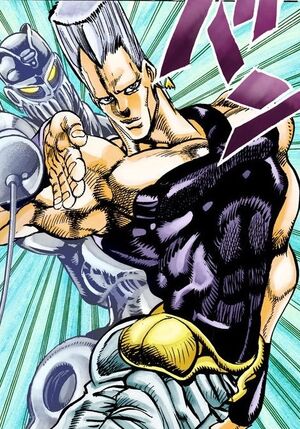 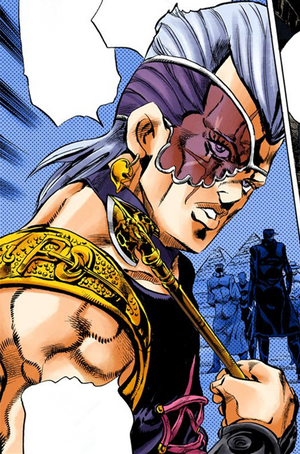 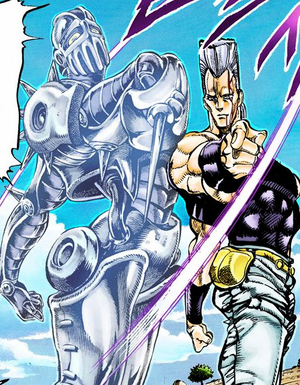 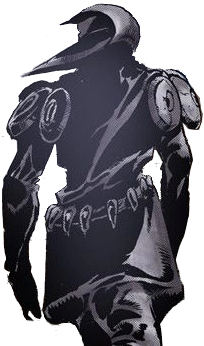 Jean Pierre Polnareff is one of the members of the Stardust Crusaders that travelled across the world to defeat Dio. He lived in the French countryside with his sister Sherry until she was raped and killed by J. Geil, a man with two right hands. After Dio's defeat, he went across the world trying to find any of Dio's men when he ran into Diavolo who brutally beat him to near-death by punching off both of his legs, his eye and arm. He contacted Bruno's Group so that they could team up to defeat Diavolo. When Polnareff encountered Diavolo again he pierced Silver Chariot with the Requiem Arrow as a way to defeat Diavolo, however, Chariot Requiem was uncontrollable and had to be stopped. Polnareff was placed inside of the body of Coco Jumbo, however, his soul remained in the turtle due to its Stand and he was allowed to keep within the human world after his body had died.

Superhuman Physical Characteristics, Pain Suppression (Was able to walk like normal after having all of his toes chopped off)

Superhuman Physical Characteristics, Statistics Amplification (Can remove its armour to increase it speed but lower it defence), Size Manipulation (Can shrink itself to be small enough that it can fit inside someone's vein), Soul Manipulation, Non-Physical Interaction (Stands are made up of their user's soul and can damage and destroy other Stands), Invisibility, Intangibility (Stands are invisible to Non-Stand users and are intangible to any Non-Stand)

Immortality (Type 2 & 3), Status Effect Inducement, Sleep Manipulation (Makes every living thing within a mile radius fall asleep), Regeneration (Low-High, Was going to regenerate from being just a head), Soul Manipulation (Makes everyone who falls asleep have their souls swapped with the closets living being next to them, Can make someone get attacked by their own Stand), Body Control (Can still control its dismembered limbs), Attack Reflection (Can make soul-based attacks attack the user), Biological Manipulation, Fusionism (After a while, Chariot Requiem will start fusing people with beings from another universe), Life Manipulation (Chariot Requiem slowly makes peoples lives fade away that is within the range of its ability)

Speed: Superhuman Movement Speed (Is comparable to Jotaro) with MFTL reactions (Has reacted to attacks from Star Platinum) | MFTL (Has deflected a barrage of beams of light, Has moved faster than Hanged Man while it was travelling from mirror to mirror) | MFTL (Can react to attacks from Sticky Fingers)

Weaknesses: None Notable | Silver Chariot loses a lot of its defence after it sheds its armour | Chariot Requiem can be seen and interacted with by anyone

Retrieved from "https://character-stats-and-profiles.fandom.com/wiki/Jean_Pierre_Polnareff_(Canon)/Unbacked0?oldid=79457"
Community content is available under CC-BY-SA unless otherwise noted.