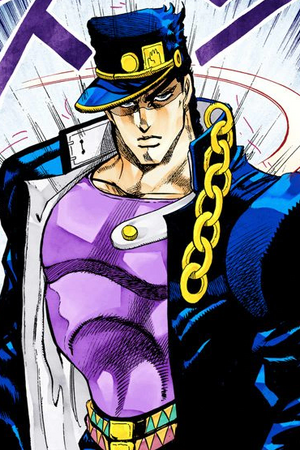 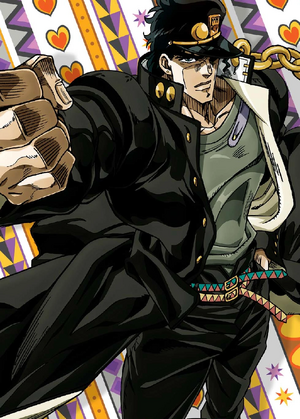 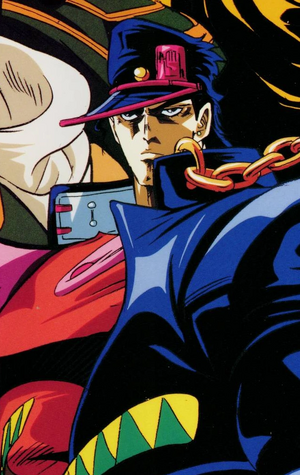 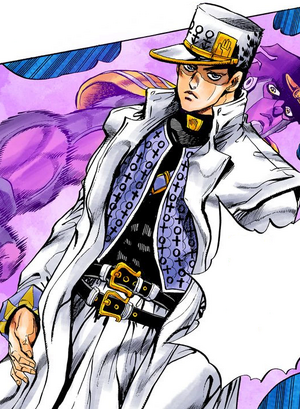 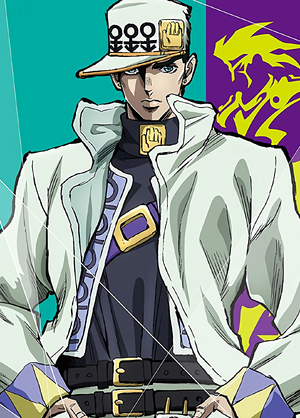 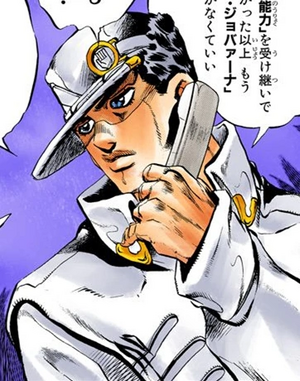 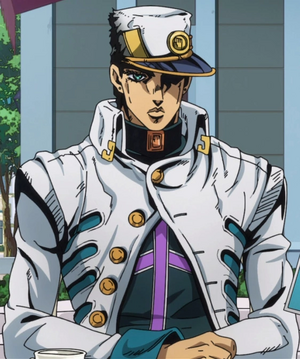 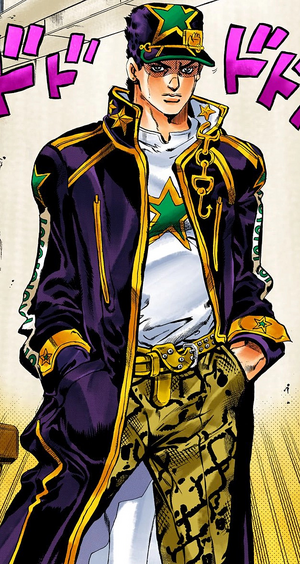 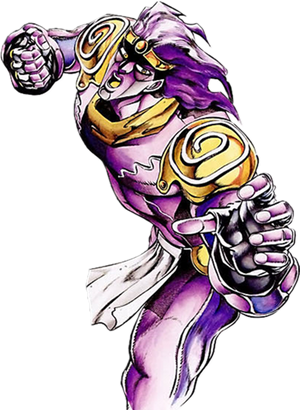 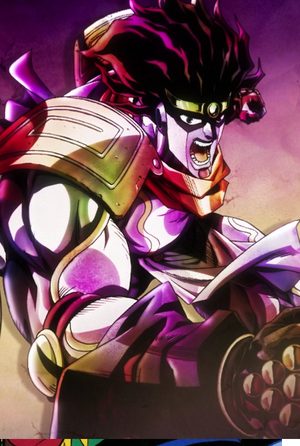 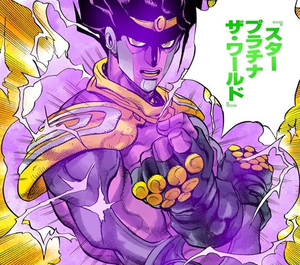 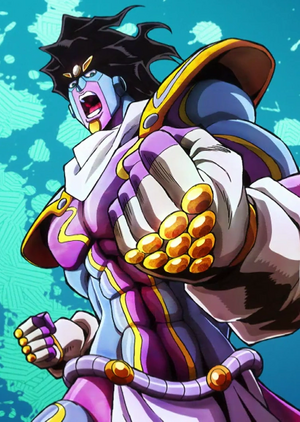 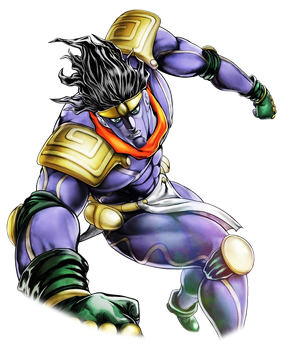 Jotaro Kujo is the grandson to Joseph Joestar and Great Great Grandson to Jonathan Joestar. Jotaro gained his Stand because DIO was stabbed by the Stand Arrow which gave every Joestar a Stand. Jotaro didn't want to fight DIO since he believed it was nonsense until he saw that his mother was being killed by her own Stand and that the only way to save her was to kill DIO within fifty days.

After defeating DIO, he saved the life of his mother and uncle (Though he wouldn't know this until ten years later).

In Part 4, Jotaro went to Morioh to find Joseph's illegitimate child, Josuke Higashikata, and inform him of the existence of a murderous Stand User named Angelo who Jotaro helped Josuke to defeat and Jotaro would stay in Morioh to find the Stand Arrows that exist within Morioh and to stop the serial killer Yoshikage Kira.

In Part 6, Jotaro found out that his daughter, Jolyne Cujoh, had been arrested and he knew that she had been framed by one of DIO's remaining minion. Jotaro had both his memories and his Stand taken by Enrico Pucci and was put into a coma because of this. Jolyne was able to get both his memories and Stand back and he helped his daughter and her friends fight against Pucci from stopping him from achieving DIO's plan to reaching "Heaven" and resetting the universe.

Superhuman Physical Characteristics, Battle Result Impediment (Type 1), Pain Suppression (Has fought against Dio with three broken bones, Was barely affected by having a ceiling fan stabbed into his shoulder), Instinctive Reactions (Even while in a coma, his body attacked someone who tried to remove his hat), Fourth Wall Awareness (Stated that if he was to die who would replace him as the protagonist heavily implying that he knows he is in a manga), Resistance to Fire Manipulation, Heat Manipulation (Wasn't fazed by being set on fire to the point that fire was coming out of his mouth) and a Minor Resistance to Time Stop (Can see events in stopped time even after his time stop has run out)

Superhuman Physical Characteristics, Enhanced Senses (Has enhanced eyesight which allows Jotaro to see vast distances and examine nearly invisibly small objects), Air Manipulation (Star Platinum can breathe so hard that it can remove all of the air around someone and suck up all the fog in a city), Time Manipulation, Time Stop (Can stop time for five seconds), Body Control (Can store up all of its power in its finger and stretch it out), Soul Manipulation, Non-Physical Interaction (Stands are made up of their user's soul and can damage and destroy other Stands), Invisibility, Intangibility (Stands are invisible to Non-Stand users and are intangible to any Non-Stand)

Attack Potency: Wall Level (Kicked a police officer so hard that he was sent flying and broke a garage door, Even when turned to a young child he can still hit a grown adult so hard that they go flying) | Large Town Level (Fully absorbed the Stand Justice which is as big as a town, Should be stronger than Weather Report, Overpowered and harmed DIO and The World (A Stand considered by DIO, a man who encountered many Stands and researched all of the ones he has seen, the strongest Stand in terms of physical strength) even once he reached his peak strength, Has been stated to be the strongest Stand to appear within Part 4 meaning that Star Platinum is stronger than Stands like Crazy Diamond and Red Hot Chili Pepper) | Large Town Level (Is as strong as his canon self), Multiverse Level+ with Hax (Is comparable to The World Over Heaven which erased Funny Valentine out of every universe across the infinite multiverse, Overwrote the multiverse to undo the damage that Heaven Ascension DIO and completely change the multiverse to make sure that everyone survives throughout their part) | Dwarf Star Level (Is comparable to Namek Saga Goku) | Complex Multiverse Level (Is comparable the protagonist at the end of the game who is able to fight Prometheus) | High Complex Multiverse Level (Is comparable to Bobobo-bo Bo-bobo who has infinite 11th dimensional power)

Speed: Superhuman Movement Speed (Ran hundreds of metres in a few seconds) with MFTL reactions (Is comparable to Josuke and Okuyasu, Reacted to attacks from The World, Crazy Diamond and Killer Queen) | MFTL (Has been stated to be faster than light without the usage of time stop, Has fought on par with Silver Chariot who was able to cut a Stand that turned into a beam of light while it was moving, Speedblitzed Killer Queen while Jotaro was heavily injured, Stated by Koichi that Star Platinum would easily beat Red Hot Chili Pepper which Koichi stated was faster than light) | Inaccessible (Is comparable to The World Over Heaven which has reacted to attack from Gold Experience Requiem (The World Over Heaven was able to Overwrite Gold Experience Requiem before Gold Experience Requiem could Reset The World Over Heaven back to Zero) and Tusk Act 4, which is able to move in stopped time) | MFTL (Is superior to his canon counterpart) | Immeasurable (Comparable to the protagonist) | Immeasurable (Comparable to Bobobo-bo Bo-bobo)

Lifting Strength: Above Average Human (Can fully lift up and carry Noriaki Kakyoin, someone who weighs around 65 KG) | Class K (Held up the giant Stand High Priestess' upper jaw and head before breaking High Priestess' teeth)

Stamina: Very High (Continued fighting against DIO after DIO broke three separate bones and almost being crushed by a Steamroller Was completely fine after having his entire body engulfed in fire, Got back up after being blown up by Sheer Heart Attack, Was still able to move after having half of his body melted by Bug-Eaten, Managed to stay awake for a minute after he had stopped his heart from beating)

Intelligence: Genius (Has outsmarted both D'Arby brothers and beat both of them at their best games (Poker for the Older D'Arby and the video game Oh! That's a Baseball! for the Younger D'Arby) who are considered geniuses by DIO, Managed to predict exactly what DIO would do in their fight multiple times (Jotaro planned for DIO throwing knives at him, planned a trick to play dead so DIO would let his guard down and get close to him, planned a trick which would make DIO think that he could stop time before making DIO realise the trick then surprising DIO by moving in stopped time and even which specific manhole DIO was going to jump down), Is a highly trained Marine Biologist who is able to write a thesis on marine life while searching for a serial killer, Figured out how Sheer Heart Attack worked within the short amount of time he was fighting it)

Weaknesses: Any damage that Star Platinum takes so does Jotaro, Star Platinum has a range of two metres and a range of ten metres with Star Finger and has a hard time fighting opponents that are out of his range, He can only stop time for five seconds at max and at minimum he can only stop time for a second, Due to being human repeated usage of time stop puts a strain on Jotaro's body which became, even more, taxing the older he got, If Jotaro stop using time stop then it will lose its effectiveness and he won't be able to stop time as long as he could at his max to the point that his time stop had decreased down to a single second, Jotaro can't use time stop right after he already used it

Note 2: In an interview with Hirohiko Araki, the creator of JoJo's Bizarre Adventure, he stated that The World and Star Platinum's time stop stopped all time across the universe rather than a specific range.

Note 4: Star Platinum The World does not stack damage it does while time is stopped. This has been shown to be false when DIO punched through Kakyoin, when Jotaro broke Kira's hand, when Jotaro and DIO damaged the steamroller and when Jotaro damaged Sheer Heart Attack. All of these times, the damage was dealt to the opponent while time was stopped.

Retrieved from "https://character-stats-and-profiles.fandom.com/wiki/Jotaro_Kujo_(Canon,_Composite)/Unbacked0?oldid=85618"
Community content is available under CC-BY-SA unless otherwise noted.