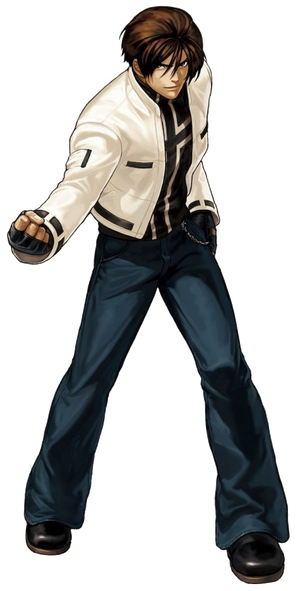 Kyo, after defeating his father, would be invited to The King of Fighters tournament alongside his friends Benimaru Nikaido and Goro Daimon who formed Team Japan.

The three would beat all other participants and would be invited onto the Black Noah ship by the mysterious "R", the tournament host. When the three arrived, Kyo would find his father beaten nearly to death and "R", real name Rugal Bernstein admits to being responsible and that he set up the tournament to kill strong fighters and turn them into statues. After a difficult fight, Team Japan would beat Rugal and he pulls out a bomb that blows up Black Noah with Team Japan barely escaping the explosion.

Soon Kyo and the rest of Team Japan would receive their second invitation to The King of Fighters tournament. Once again Team Japan would beat everyone else and come face to face with Rugal who survived the explosion and that he has beaten and mind-controlled Kyo's father. Once Team Japan beat Kyo's father, Rugal reveals a mysterious power that allowed him to survive the explosion that sank Black Noah and fights Tram Japan again, however, he lost again and the power destroyed Rugal's body.

Before the next King of Fighters tournament, Kyo would fight against Leopold Goenitz who effortlessly defeated him, causing Kyo to join the tournament with a new fighting style just to beat him. During the climax of the tournament, Kyo would meet Chizuru Kagura who would tell him about the Orochi and how the three Clans sealed him away and that the Hakkesshu, who Goenitz was the leader of, was trying to release the Orochi. Kyo and the other two members of Team Japan would fight and kill Goenitz.

Eventually, Kyo would accept the burden of the Kusanagi Clan and fight against the remaining members of Hakkesshu, Yashiro, Shermie and Chris during the next King of Fighters tournament. Kyo would form a team with the descendants of the other two families that sealed away Orochi, Chizuru Kagura and Iori Yagami, Kyo's long time rival, to form Team Sacred Treasures. Soon the three would beat the godly Orochi and seal him away but not before Kyo and Iori had one final match which knocked them both out, allowing Kyo to be captured by the NESTS criminal organisation.

While as a captive for NESTS, Kyo had his DNA taken and used to make clones of him that would be used to take over the world and to have his DNA given to other experiments to give them a copy of the Sacred Kusanagi Flames. Eventually, Kyo would escape when K' defeated Krizalid and Kyo would vow to destroy the organisation.

Kyo would rejoin his teammates from Team Japan including his fan Shingo Yabuki and the three would start their takedown of the NESTS organisation when NESTS hosted the King of Fighters tournaments.

Soon enough, the organisation would be stopped by K' and his allies put a stop to the criminal organisation for good without Kyo needing to intervene.

After the fall of NESTS, Kyo would continue fighting in The King of Fighters tournaments until Chizuru was controlled by Those From the Past and fought against Kyo and Iori before she had the Yata Mirror stolen from her by Ash Crimson who swore that he would steal Iori's Yasakani Jewel and Kyo's Kusanagi Flames before running away.

In the next King of Fighters tournament, Kyo and Iori would team up to find Ash Crimson, however, due to the seal of Orochi weakening, Iori went berserk and transformed into his Orochi Iori form. Kyo tried to beat Iori to calm him down, however, Ash Crimson teleported behind Iori and stole the Yasakani Jewel before telling Kyo that he would take the Kusanagi Flames during the next King of Fighters tournament.

Just before the next King of Fighters tournament, Kyo would be attacked by two members of Those From the Past who Kyo fought off before giving him the invitation to the tournament which he would use to fight alongside Benimaru and Goro again. During the tournament, Ash Crimson would cause a time paradox that erased his ancestor and himself from existence, returning both Iori's Yasakani Jewel and Chizuru's Yata Mirror back to them with none of the three or anyone else being able to remember Ash or Those From the Past. In this new history, Team Japan won this edition of the King of Fighters tournament

After Those From the Past were finally finished, Kyo and the other two members of Team Japan would join the tournament once again.

Soon enough, Team Japan managed to defeat everyone else including the champion Antonov when suddenly the sky turn black and Verse, a mysterious entity created by Ash Crimson's time paradox, showed up and started to destroy all of time and space with Team Japan being the only ones who could stop him. Once Verse was defeated, all of the souls in its body were released including Orochi who was quickly sealed away by Kyo, Iori and Chizuru as soon as they found him trying to form a body.

Due to the discovery that the revival of former antagonists including Yashiro, Shermie and Chris meant that Kyo, Iori and Chizuru would form Team Sacred Treasures again to fight against them and any other villains who may have been revived in the King of Fighters XV tournament in order to prevent the seal on Orochi from being tampered with.

Powers and Abilities: Superhuman Physical Characteristics, Martial Arts (Is a master of the Kusanagi-ryū Kobujutsu as well as Chinese Kenpo), Acrobatics, Chi Manipulation, Explosion Manipulation, Fire Manipulation (Kyo is able to produce flames and explosions from his body and even encase his body with flames), Sealing, Soul Manipulation, Purification (The Sacred Kusanagi Flames have the ability to seal away Orochi and purify souls), Flight, Accelerated Development (Skill, Went from being easily defeated by Leopold Goenitz to being able to beat him in the span of a few days of training), Non-Physical Interaction (Is able to interact with Vice and Mature who are ghostly spectres), Statistics Amplification (With MAX Mode, Kyo can increase his attack power and his durability), Status Effect Inducement (Can instantly stun an opponent by using a Critical Counter), Resistance to Heat Manipulation, Ice Manipulation (Is unaffected by Kula Diamond's ice powers which can instantly freeze the area around her when activated and is unaffected by the extreme heat from Orochi Yashiro's magma filled arena), Fire Manipulation (Is barely effected by powerful fire attacks from the likes of Mai Shiranui, K', Iori Yagami and Krizalid), Electricity Manipulation (Can shake of electricity based attacks from the likes of Benimaru Nikaido and Blue Mary), Soul Manipulation (Can survive Orochi and Zero ripping out and destroying his soul), Time Stop (Can fight Saiki in stopped time), Space-Time Manipulation, Reality Warping (Was unaffected by Saiki warping Space and Time), Biological Manipulation (Can survive being hit by Saiki who can instantly kill someone and rot their corpse by touching someone), Power Nullification (Can negate the effects of Ash Crimson's ability sealing technique), Gravity Manipulation, Black Hole Generation (Can survive being sealed into a black hole by Zero One), Petrification (Can return to normal after being turned to stone by Mukai), Matter Manipulation (Can take hits from Igniz who can casually turn someone into dust just by putting his hand on them), Analytical Prediction (Maxima has stated that the fighters in the King of Fighters tournament never behave the way his analytical data suggests they will), Logic Manipulation (Was unaffected by Otoma=Raga's attacks that control the logic of the world)

Attack Potency: Multi-Universe Level (Defeated Orochi who created and maintained an entire universe which collapsed upon his defeat, Defeated Verse who was going to destroy everything across the past, present and future at the same time, Should be stronger than Saiki who stated that he was going to erase the entire timeline, Is comparable to K' who managed to defeat Igniz who has the Disintegrational Universe technique where he creates and destroys a universe, Is comparable to people like Terry Bogard, Iori Yagami and Shermie who managed to defeat Kukri who created and maintained a universe sized pocket dimension that he was going to fuse with the main King of Fighters universe, Scales to people like Dolores, Ash Crimson and the members of Team Orochi who all came from a higher plane after their deaths and resurrection, Is stronger than Nakoruru, both by being able to defeat Verse when Nakoruru couldn't on her own and by being considered stronger by Tung Fu Rue, who could defeat Shizuka Gozen who created her own realm of existence called Eternity and is able to freely able to manipulate it, Enja and Suija who were able to destroy and create and maintain an entire universe respectively and Yuga the Destroyer who fused the Demon Realm and the Human Realm together), Higher with MAX Mode

Speed: FTL (Can dodge attacks from Elisabeth Blanctorche who uses light as her main method of attack, Can block all of Orochi's sunlight based attacks, Scales above Takuma Sakazaki and Bao who were both easily able to intercept a laser fired from the Zero Cannon which fired lasers at a fraction of the speed of light)

Lifting Strength: Class 5 (Can lift Chang Koehan while he is carrying a large iron ball)

Durability: Multi-Universe Level (Can take a beating from people like Rugal Bernstein, Leopold Goenitz, Yashiro Nanakase, Shermie, Chris and Orochi, Survived the destruction of the universe that Orochi created and maintained), Higher with MAX Mode

Stamina: Superhuman (Can fight against multiple expert martial artists, genetic experiments and godly beings in a short span of time, Managed to get up and fight K' without any fatigue after being constantly experimented on by NESTS for months)

Intelligence: Gifted (Is a naturally talented martial artist who is able to create different martial arts styles in a short span of time just to defeat a single opponent, Managed to defeat his father when he was fifteen while his father had decades of training and combat experience, Is considered to be one of the greatest martial artists in the world to the point of being invited to every King of Fighters tournament after he was invited for the first time, Has won the King of Fighters tournament upwards of six times with his victories coming after fighting extremely power martial artists who have spent most of their lives fighting, Managed to defeat Orochi despite him being able to read Kyo's mind)

Weakness: Is cocky and overconfident in his skills, MAX Mode only lasts so long, Kyo will turn into a raging beast if he strays onto a darker path in life

Note 1: This Kyo is the original version of Kyo and is different from his various clones.

Note 4: For more details about the universal scaling in the King of Fighter series, please look at this blog.