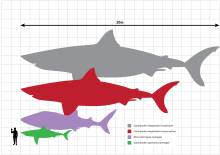 Some characters have considerably higher measurements than ordinary ones, which causes some of their combat capabilities, especially strength, speed (although agility and maneuverability might be limited), and durability to increase. We call this having a Large Size.

Many characters are able to obtain this via Size Manipulation.

For a comprehensive list of character/object sizes up to a universal size, see this video.

Large sizes are classified in the following manner:

Type 0 (Supersize): Characters far larger than an ordinary human. These are "giants", if you will. Size for this level begins at 5 meters tall.

Type 1 (Building sized); Characters at least 13-14 meters tall, or the size of building.

Type 2 (Skyscraper sized): Characters whose size is comparable to that of high-rise buildings, starting from 100 meters. Starting from this level, the characters are usually able to generate shock waves.

Type 3 (Mountain sized): Characters no less than a kilometer (1000 meters) in size. Starting from this level, characters are usually able to generate earthquakes.

Type 4 (Global): Characters so huge that it would be easily viewable from the surface of the planet when viewed from space. These characters are usually able to generate global catastrophes and high-end natural disasters. Characters here have a size that is millions of km².

Type 5 (Planetary): Characters comparable in size to planets. At this level, characters usually have a gravitational pull at the planetary level.

Type 8 (Universal): Characters the size of or larger than a universe or even a significant part of it (such as the observable universe). Characters that fully correspond to this level are not very common, but also include those who are one with the universe/universal space-time continuum.

Retrieved from "https://character-stats-and-profiles.fandom.com/wiki/Large_Size?oldid=51773"
Community content is available under CC-BY-SA unless otherwise noted.