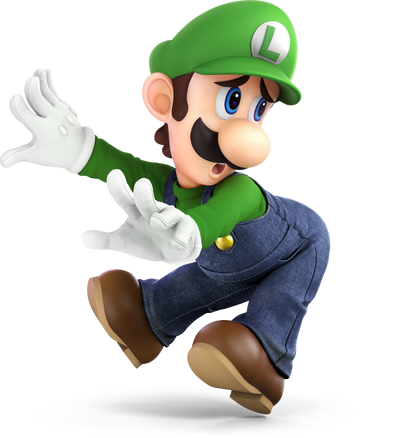 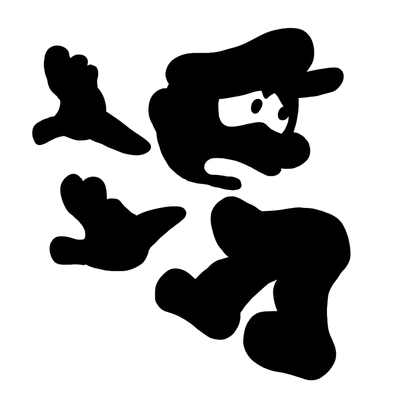 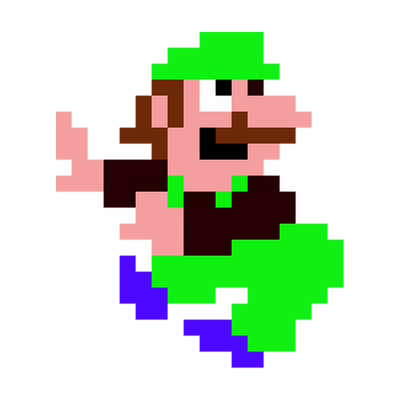 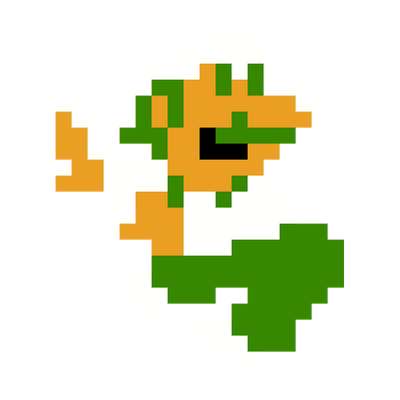 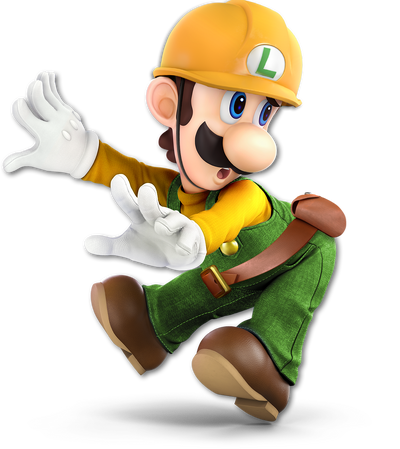 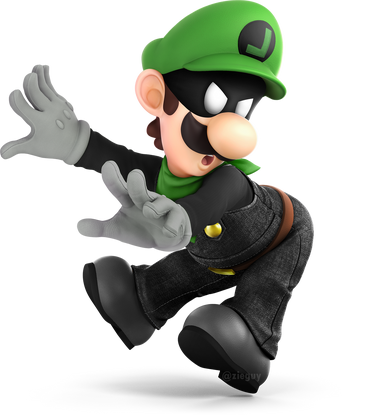 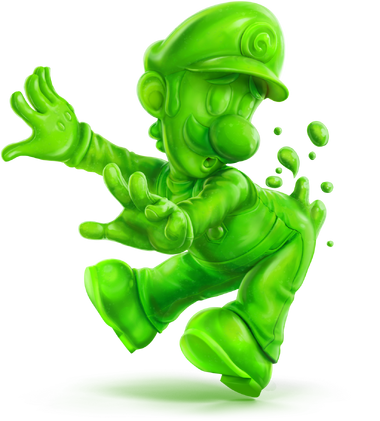 Mario’s younger twin brother is a great guy, but he’s not exactly brave—and he’s really scared of ghosts! Like his big brother, though, he’s quick to lend his hand to those in trouble. His long legs make him a great jumper, perhaps even better than his more famous sibling. 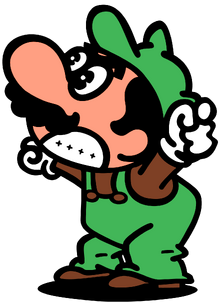 Country level in Super Mario Bros. (Can defeat Bowser with his fireballs, who affected the entire Mushroom Kingdom with his black magic) | Large Town level+ in Super Mario World (Mario lifts and punts Larry's castle with zero effort whatsoever.) | Multi-Galaxy level in Yoshi's Island DS (Luigi is a Star Child. By being a Star Child, Luigi has a star embedded within his heart that grants him sufficient enough power to conquer the universe, given that the other six Star Children are with him. So, each Star Child has the power to conquer 1/7 of the universe—billions of galaxies.) | Mountain level in New Super Luigi U (Defeated Kamek and those superior to him, who created a tornado of this size and power) | At least Galaxy level (Luigi scales to Mario, who has defeated numerous bosses who were empowered by Power Stars (Example: King Bob-omb), even when he himself doesn't have any. Power Stars are equal to galaxies as the Lumas that turn into Power Stars can also turn into galaxies), likely Universe level+ (Defeated Bowser, who tanked the collapse of his own Galaxy Reactor, which was stated to threaten the very fabric of the universe whilst extremely fatigued. Bowser's Galaxy Reactor is repeatedly called a universal threat, and was stated to decide "The Fate of the Universe," solidifying it at this tier. And Luigi should scale to this.) | Large Country level in Mario & Luigi: Partners in Time (Defeated Elder Princess Shroob, who created a large storm simply by powering up, which seems to have spread across the entire Mushroom Kingdom, at least. Elder Princess Shroob also desired to destroy the entire kingdom, even commenting on how the Shroobs will "dance on the buried remains of this pathetic kingdom." The Mushroom Kingdom is a massive country. | Multiverse level in Mario & Luigi: Dream Team. (Defeated Dreamy Bowser, who had the power of every single dream. Dreams are obviously universes, as we see Mario enter them. There are hundreds of inhabitants on Pi'illo Island, so it makes perfect sense for it to be Multiversal at bare minimum.) | Multi-Universe level in Mario + Rabbids Kingdom Battle (Defeated MegaDragonBowser, and destroyed the Megabug. The former is the form the latter took after absorbing Spawny [who in turn was merged with the SupaMerge Headset] and Bowser. By absorbing the SupaMerge Headset, the Megabug attained its fusionism powers, which was capable of merging Mario's world and the real world.) | Universe level+ or Multiverse level in Mario Party 5 (Defeated Bowser, who outright stated and showed that he was going to ruin and/or destroy all the dreams, including Future Dream, which was outright stated by both Misstar AND Mario Party 5's guide booklet to be an entire universe. Also, the Dream Depot turns the dreams of all citizens of the Mushroom Kingdom into universes.) | At least Solar System level+ to Multi-Solar System level+ in Mario Party 9 (Defeated Bowser during the events of this game. This time, the plot is that Bowser has stolen the Mini-Stars from the sky. And apparently, it seems that these Mini-Stars are actual stars in the sky. In the ending cinema, the Mini-Stars are returning to the sky--all of which Bowser said he was going to put to use. It's shown at the end, when many burst after his defeat, that he meant this as they were going to power him. By absorbing those stars, Bowser became this powerful)

Massively Hypersonic (His jumps are faster than Lakithunder's lightning.) | MFTL+ (Can keep up with Bowser's airships post Mario Galaxy, which moved in tandem with Rosalina’s Comet Observatory, said Observatory flew to the center of the universe within a few seconds making it MFTL+. Fought and kept up with the Fake Millennium Star, which flew from the center of the universe to Earth in a short time frame.) | MFTL+ Reactions (Consistently reacted and maneuvered while being launched intergalactic distances by Launch Stars.)

Class 100 (Luigi lifted King Bob-omb easily, and is comparable to Mario, who shoved a watermelon several times his size with sheer effortlessness) | Class M (Should be comparable to Bowser, who pulled an entire island into shore), likely Class G (Lifted and punted Larry's castle with absolutely no effort whatsoever)

High (Comparable to his brother Mario) | Extremely high (Literally escaped a black hole with zero signs of exhaustion) | Extremely high (Can casually exceed the speed of light. And based on Einstein's famous equation, such a feat would require an impossible amount of energy)

Standard Melee Range normally. Extended Melee Range with his different close range weapons such as the Hammers. Tens of Meters with power-ups and weapons that can cover a good length of the area Luigi's in. 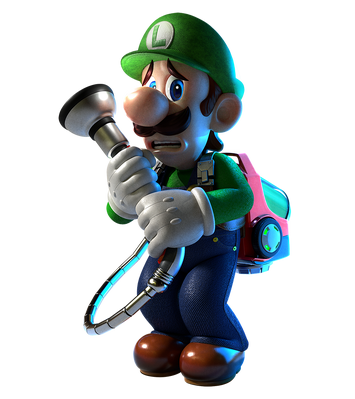 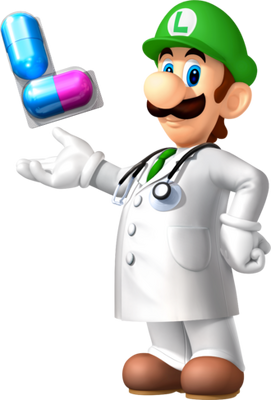 Gifted (Not smarter than Mario, but is a combatant expert and an experienced plumber. He also became a doctor.)

Most of his power-ups are lost upon sustaining a fatal hit. Is self taught in combat. Isn't exactly the best tactician. Despite his intelligence, he's usually depicted as naive. Has a phobia of ghosts. Luigi has less traction than Mario, causing him to slip up often.

Retrieved from "https://character-stats-and-profiles.fandom.com/wiki/Luigi_(Canon)/SuperNintendude?oldid=102325"
Community content is available under CC-BY-SA unless otherwise noted.