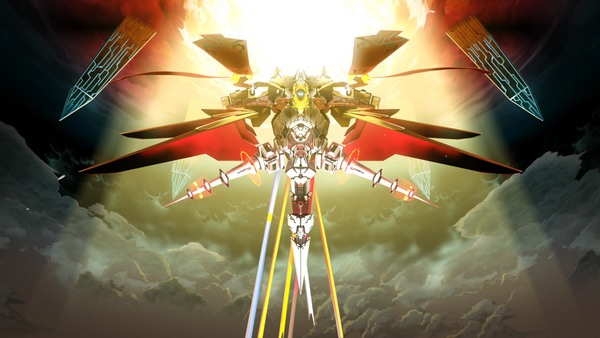 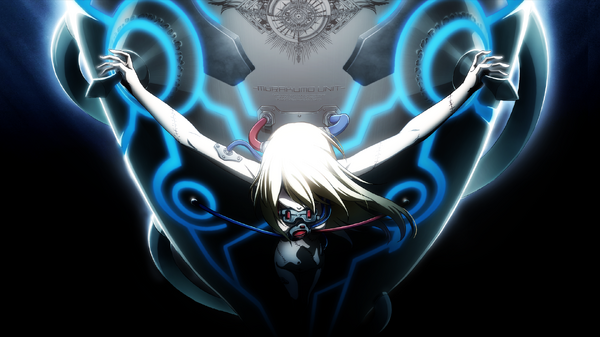 The Master Unit: Amaterasu (マスターユニット・アマテラス, Masutā Yunitto: Amaterasu), also referred to simply as the Amaterasu Unit or the Master Unit, is one of the three Sankishin (a.k.a. Original Units) alongside the Susano'o Unit and Tsukuyomi Unit, and is a major recurring entity throughout the BlazBlue series. Wielded by a being known as the Origin, Amaterasu possesses the power of creation, the Izanagi System, and resides deep within the Boundary. It is noted to be unique in comparison to the other two Original Units, that being due to its ability to cause both large and small-scale Phenomena Interventions, thus altering any phenomenon of her choosing, as well as being a completely concealed presence that could only ever be Observed by the Calamity Trigger.

Powers and Abilities: Superhuman Physical Characteristics, Godly Physiology, Self-Sustenance (Types 1, 2 and 3), Inorganic Physiology (Type 2), Teleportation, Dimensional Travel, Time Travel, Portal Creation, Forcefield Creation, Instinctive Reaction (The Sankishin are the basis of all Phenomena Weapons, which can fight, move and react automatically, as they are Nox Nyctores), Presence Concealment (Besides the Calamity Trigger, none can sense or Observe Amaterasu and she is able to conceal her presence even whilst existing in the world), Non-Corporeal, Nonexistent Physiology (Type 1) and Abstract Existence (Type 1; Was referred to as the world itself by Nine), Immortality (Types 1, 3, 5, 6, 8 and likely 10), Regeneration (High-Godly, likely True-Godly), Healing and Resurrection (Scaling to Observers), Resistance Bypassing, Immortality Negation (Types 1, 3, 5, 6, 8, 9 and likely 10), Healing Negation, Resurrection Negation and Regeneration Negation (High-Godly, likely True-Godly; Nox Nyctores and the Azure Grimoire can irreversibly damage one's soul, effectively negating any potential form of recovery. Scales to Izanami, who threatened Terumi's existence whilst aware of his various forms of immortality, and the Azure Grimoire), Non-Physical Interaction, Power Bestowal (Able to bestow immortality via the Eyes of the Azure), Sealing (Scaling to Izanami, who sealed Ragna within the Embryo), Possession and Power Mimicry (Scaling to Nu, whom can create a precise copy of Ragna and even possess him), Status Effect Inducement, Curse Manipulation, Paralysis Inducement, Phenomena Intervention (Capable of causing Phenomena Interventions of any scale), Space-Time Manipulation (Can affect the entire space-time continuum), Illusion Creation (Capable of creating illusive copies of other beings), Reactive Power Level, Reactive Evolution, Statistics Amplification, Light Manipulation, Radiation Manipulation, Technological Manipulation, Absorption, Power Nullification, Mind Manipulation and Death Manipulation (Scaling to the Izayoi), Gravity Manipulation, Invulnerability (Immune to conventional attacks due to existing outside of Reason), Pocket Reality Manipulation (Should be able to form a Zanki Barrier), Attack Reflection (Can summon the Tsukuyomi Unit, which is capable of reflecting back attacks), Air Manipulation, Resistance to: Plot Manipulation (Scales to the numerous characters who underwent their Central Fiction arcade modes, in which they were unaffected by Nine manipulating the events of her fabricated world, in a similar manner to a story. Moreover, she was in control of every single thing that was occurring within it, with Azrael pointing out in his own story that all of what he went through during Act 1 was nothing but, well, an act), Madness Manipulation, Statistics Reduction (Everybody can resist Seithr, which is poisonous, can induce addiction and deteriorate bodies. Furthermore, it can reduce one's power), Corruption, Chaos Manipulation, Existence Erasure, Mind Manipulation, Corrosion Inducement, Mind Manipulation, Memory Manipulation and Time Stop (Can resist the effects of the Cauldron and the Boundary, which can erase memories and cause time to stop with their mere existence. Furthermore, their effects involve losing everything you were and ever will be, with the Cauldron even being capable of corrosion. Finally, when entered or closed, the Boundary results in taking-in infinite information dating across the beginning of time and all possibilities, also corrupting and turning anything into chaos), Perception Manipulation (Resists the effects of Ars Magus, which nullifies the user's senses. Unfazed by Ragna's presence, which caused Litchi to sink into a pit of darkness), Power Nullification, Spatial Manipulation and Explosion Manipulation (Can withstand shots from Bolverk, which can literally pierce through space and cause Armagus-based explosions), Petrification and Gravity Manipulation (Ars Magus Barriers protect their users from said abilities), Phenomena Intervention (Even her clones are able to resist Phenomena Interventions), Petrification and Gravity Manipulation (Ars Magus barriers have been stated to protect their users from these effects), Immortality Negation (Types 1, 2, 3, 4, 5, 6, 7, 8, 9 and likely 10), Healing Negation, Resurrection Negation and Regeneration Negation (High-Godly, likely True-Godly; Scaling to Phenomena Weapons, which can fight Ragna armed with the Azure Grimoire, which can inflict irreversible damage to one's soul and negate any potential form of recovery, as well as threaten the existence of the likes of Terumi), Fear Manipulation (Unfazed by Ragna's presence, which passively scared Mai and Platinum), Physics Manipulation (Her clones are able to withstand Azrael's strikes, which are powerful enough to literally break the very Laws of Physics as we know them), Hacking, Pain Manipulation (Rachel, an Observer to whom Amaterasu scales, was capable of resisting Hazama's pain inhibitors, which could kill a person ten times over), Absolute Zero (Scales from her clones, who were able to withstand attacks from Yukianesa, which can freeze the likes of Azrael at an intensity restricting the movement of atoms and erode one's life), Absorption, Water Manipulation, Earth Manipulation, Fire Manipulation, Air Manipulation, Darkness Manipulation, Acausality (Types 1, 2 and 5; According to Izanami, Gods exist outside of Reason, i.e. the fundamental laws of the world which originated from the elements of fire, water, earth and air, as well as light and darkness, the Two Great Origins)

Attack Potency: High Multiverse level+, likely Outerverse level (Capable of causing both small-scale and large-scale Phenomena Interventions. Vastly superior to the Embryo, which is a "mirror" of the infinite world and infinite possibilities capable of causing Phenomena Interventions and containing Seithr, and her mere presence was causing an infinite number of Embryo to converge. Able to initiate and perpetuate the Day of Reckoning, which is an event that results in the erasure and resetting of the entire world and its infinite possibilities, including various beings on this level. Possesses the power of creation, the Izanagi System, and is the equal and opposite force to Izanami)

Speed: Immeasurable, likely Irrelevant (Primarily resides deep within the Boundary, a place stated to transcend space-time. Should at least be comparable, but likely far superior, to the Embryo and "Me", who can move in a realm devoid of the concept of time)

Retrieved from "https://character-stats-and-profiles.fandom.com/wiki/Master_Unit:_Amaterasu_(Canon)/ZeroTC01?oldid=100542"
Community content is available under CC-BY-SA unless otherwise noted.