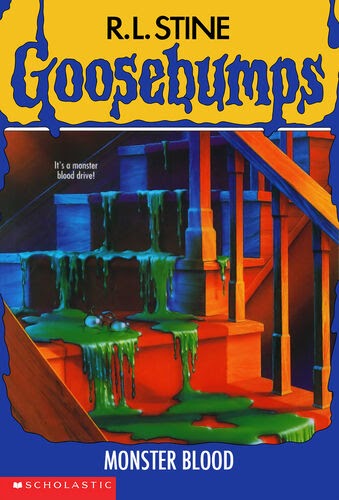 Monster Blood is a green substance that first starts off as a toy, similar to silly putty. But as time goes on, it becomes somewhat sentient and acts more like a blob. A sludge that can cause great amounts of damage if left alone. It’s supernatural properties were caused by a spell that was created and casted by Sarabeth, a witch who torments Evan Ross’s aunt, Kathryn. After its initial appearance in the 3rd Goosebumps book, Monster Blood, it gained in popularity. Getting 5 sequels, appearing in many pieces of merchandise and cameos in video games such as Goosebumps: The Game and Goosebumps Dead of Night.

Tier: Varies, 9-A at larger sizes, likely higher given time

Powers and Abilities: Limited Superhuman Physical Characteristics (Exclusive to larger sizes), Absorption (Can absorb living and nonliving things upon physical contact), Minor Stealth (Can squeeze into small places, go unnoticed while eating things and perform ambush attacks), Enhanced Senses (Can “see” and “taste” without having either eyes, a mouth, or any other facial features), Elasticity (Is described as stretchy, and in the TV adaptation it is visibly seen being stretched out), Non-Corporeal (Is living slime), Elemental Intangibility (Due to its slime physiology), Body Control and Shapeshifting (It can be morphed and stretched into shapes, like a sphere and is also depicted to have faces and facial features like mouths and eyes), Wallcrawling (In the Goosebumps TV show episode, More Monster Blood, it crawled up the wall and clinged onto the ceiling to ambush someone), Size Manipulation (When sentient, it continuously grows bigger and bigger as time passes. Whoever eats it, will start to grow either 12 feet tall or a full on giant. Becoming bigger, stronger and faster), Regeneration (Low-High, possibly Mid-Godly) (Given it’s slime physiology, it should have this level of regeneration. Came back after disappearing entirely), Immortality (Type 3), Invulnerability, Status Effect Inducement (In Goosebumps Dead of Night, it is seen attaching itself onto doors and keeping them from being opened. Along with that, while being weaponized by Slappy, it can be used to lock others in place), Binding, possibly Memory Manipulation (Can cause memory loss, making people release it despite knowing what it can do and how much damage it can cause), Life Manipulation (In the book Monster Blood for Breakfast! It gave life to a plant), Water Empowerment (In Monster Blood for Breakfast! the effects of the Monster Blood can be enhanced by water), Light Manipulation (Was glowing before it became sentient), Blessed, Dream Manipulation (Appeared inside Evan's nightmare in Monster Blood 2), Acid Manipulation (Can apparently be highly acidic), Resistance to Mind Manipulation and Soul Manipulation (Seemingly lacks both a mind and soul), likely Blood Manipulation and Biological Manipulation (Is different from traditional blood)

Attack Potency: Varies (Depends on the size of the Monster Blood), Small Building level at larger sizes (In Escape from the Carnival of Horrors, it grew to the size that it collapsed a large circus tent), likely higher given time (Can likely grow even larger than previously seen)

Speed: Below Average Human normally (Consistently gets outran by regular humans such as Evan Ross), possibly higher given time

Intelligence: While it has shown that it can pull off ambush attacks, Monster Blood as a whole lacks any actual intelligence feats and can be considered mindless.

Weaknesses: Can be weakened and eventually killed if fed regular food. Has an expiration date.

Retrieved from "https://character-stats-and-profiles.fandom.com/wiki/Monster_Blood_(Canon)/Gewsbumpz_dude?oldid=131376"
Community content is available under CC-BY-SA unless otherwise noted.