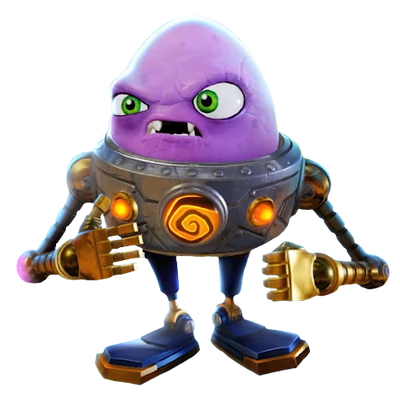 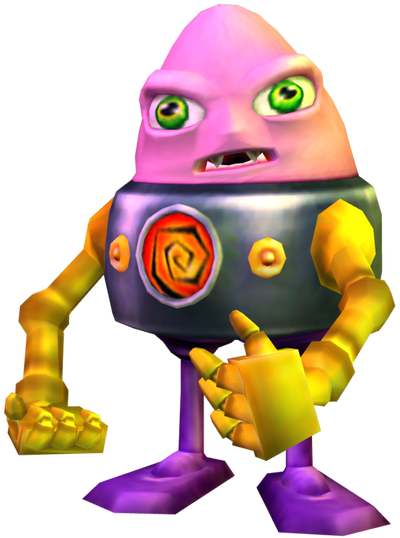 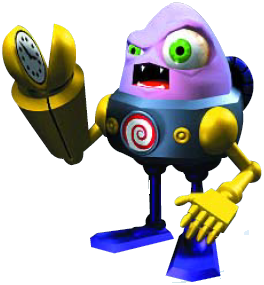 N. Trance is a recurring antagonist of the Crash Bandicoot franchise, an outer-dimensional being originating from the 5th Dimension. The so-called Master of Hypnotism, he debuted in Crash Bandicoot 2: N. Tranced as an acquaintance of Dr. Nefarious Tropy and Uka Uka, aiding them in locating and hypnotizing the Bandicoots, Crash, Coco and Crunch. Instead of the real Crash, however, they instead captured Fake Crash, whom they mistook for the real deal. This gave Crash and Aku Aku the opportunity to gather all the Power Crystals and free their allies one-by-one, eventually leading to N. Trance's defeat at their hands. Following these events, he made his return in Crash Team Racing Nitro-Fueled and Crash Nitro Kart as the leader of Team Trance, consistent of himself, as well as Dingodile, Polar and Pura, whom he had hypnotized. Besides that, however, he plays no role in the respective games' stories and mainly appears as a playable character.

N. Trance is shown to be psychotic and back-stabbing, characteristics that are inherited by those he hypnotizes, as particularly shown when he had no trouble working against N. Tropy and Uka Uka. Meanwhile, in Nitro Kart and Team Racing, he is oddly prone to making egg puns as a reference to his actual body, in addition to being a bit of a hot-headed coward.

Attack Potency: Low Multiverse level (Portrayed as roughly equal to N. Tropy, who can harness the power of space and time, in which there are at least 5, if not well over 55 or more separate points in time collectively showcased in the form of warp rooms and/or levels in Warped and N. Tranced. Fought Crash Bandicoot, whom can defeat N. Tropy, albeit he met the same fate), likely High Multiverse level+ (Was directly stated to be a 5th-Dimensional Being. Despite the previous explanation, N. Tropy's statement should also fall under this tier, as not only is he portrayed as an equal to him, a presumably 5th-dimensional being in a spatial sense provided the wording, the context and the default definition of "Dimension", but the 5th Dimension is also heavily implied to a be a part of space-time anyway, which is elaborated on in Crash's profile and supported by the fact that the 5th-Dimension is, well, dimensional space) | At least Multi-Continent level (Able to harm various characters on this level using items like Bowling Bombs and Warp Orbs)

Speed: Immeasurable (Roughly equal to N. Tropy, who can traverse space-time and spatial dimensions) | Massively FTL+ (Can keep up with other racers, such as Oxide and Crash)

Intelligence: Likely Supergenius (Can create and operate 5th Dimensional technology, which is likely transcendent to that of lower dimensions)

Weaknesses: Can be somewhat overconfident at times.

Retrieved from "https://character-stats-and-profiles.fandom.com/wiki/N._Trance_(Canon)/ZeroTC01?oldid=80781"
Community content is available under CC-BY-SA unless otherwise noted.