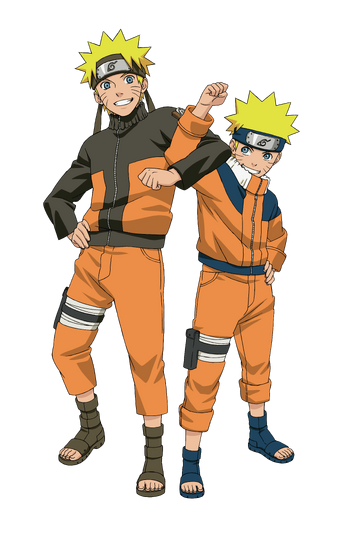 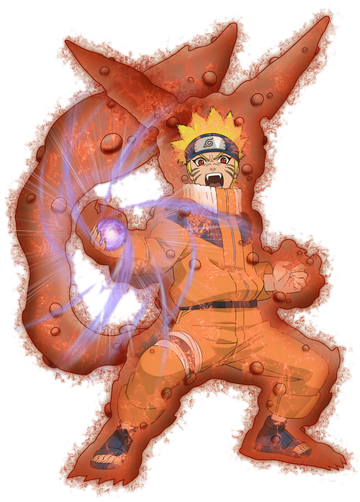 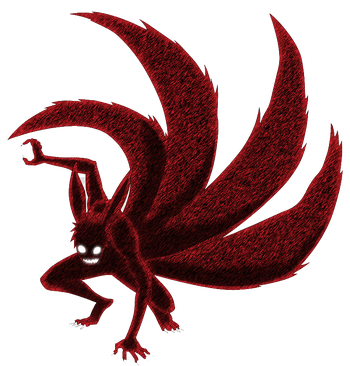 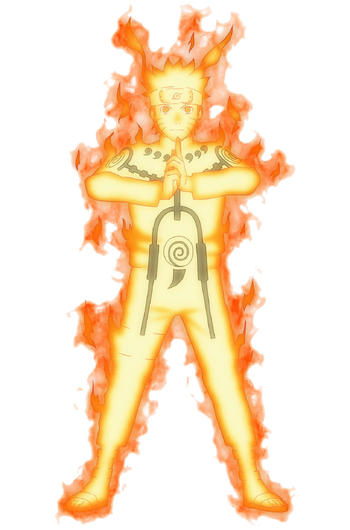 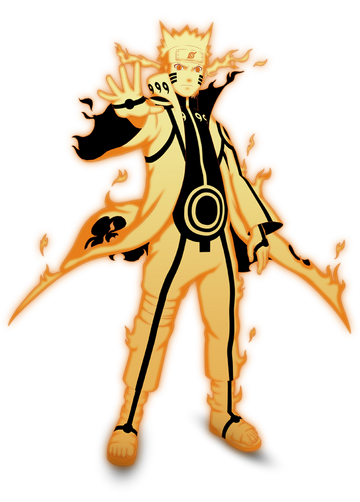 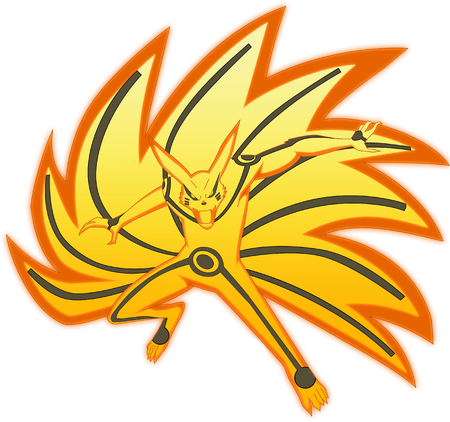 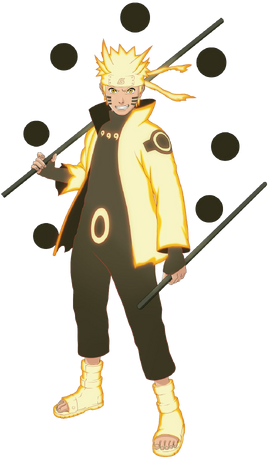 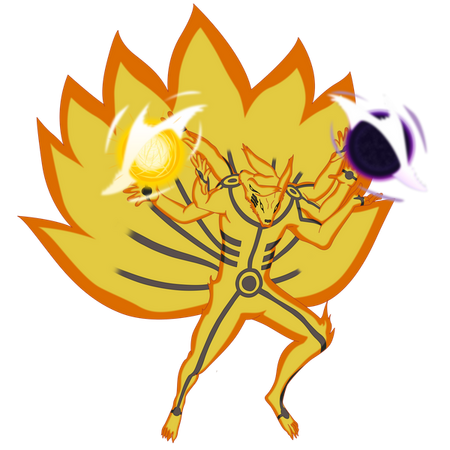 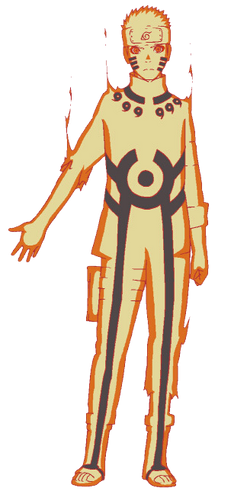 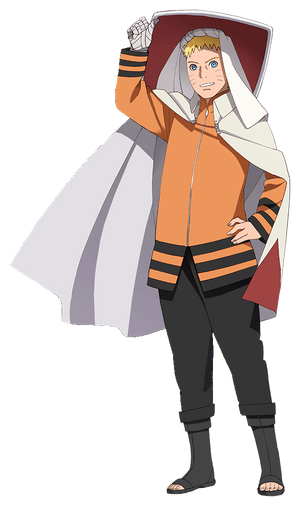 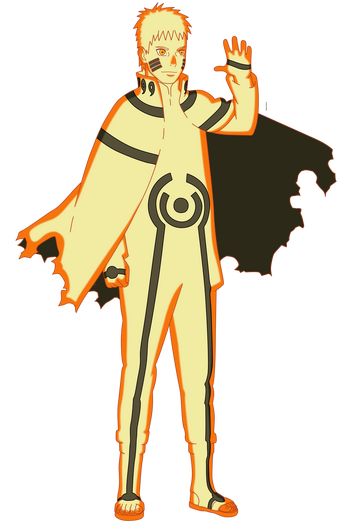 Naruto Uzumaki (うずまきナルト, Uzumaki Naruto) is a shinobi of Konohagakure's Uzumaki clan. He became the jinchūriki of the Nine-Tails on the day of his birth — a fate that caused him to be shunned by most of Konoha throughout his childhood. After joining Team Kakashi, Naruto worked hard to gain the village's acknowledgement all the while chasing his dream to become Hokage. In the following years, through many hardships and ordeals, he became a capable ninja regarded as a hero both by the villagers, and soon after, the rest of the world, becoming known as the Hero of the Hidden Leaf (木ノ葉隠れの英雄, Konohagakure no Eiyū, Literally meaning: Hero of the Hidden Tree Leaves). He soon proved to be one of the main factors in winning the Fourth Shinobi World War, leading him to achieve his dream and become the village's Seventh Hokage (七代目火影, Nanadaime Hokage, Literally meaning: Seventh Fire Shadow).

Superhuman Physical Characteristics, Weapon Mastery (Shown at being competent using a kunai and shurikens), Chi Manipulation (Every shinobi's life force is directly connected to their Chakra), Duplication (Creates Shadow Clones as strong and durable as himself), Shapeshifting, Stealth Mastery (The Transformation Jutsu allows a person to transform into animals, other people and inanimate objects of unquantifiable size), Summoning (In Part 1 he could summon one giant toad by the name of Gamabunta, who was later replaced with Gamakichi in Shippuden, who both have Weapon Mastery, Water Manipulation and Type 1 Large Size), Rage Power, Possession, Berserker Mode, Statistics Amplification, Negative Emotions Empowerment (Kurama could possess Naruto and amp him up depending on how angry he was), Low-Mid Regeneration (Regenerated from having his lung pierced), Body Control, Vibration Manipulation (via Jinchuriki Cloak), Longevity (The Uzumaki clan are known for having an extensive lifespan), Air Manipulation, Durability Negation, Power Nullification, Anti Regeneration (Rasenshuriken is a jutsu Naruto came up with after applying a Wind Nature to his Rasengan, which can destroy an opponent and their Chakra Pathway System on a cellular level to such a degree that they would never be able to use chakra again and no amount of medical ninjutsu would heal them), Enhanced Senses, Extrasensory Perception, Precognition (Sage Mode is used as a precognitive tool, as well as a substitute for the regular senses), Durability Negation (Frog Kumite is a taijutsu that attacks opponents on the inside), Clairvoyance (Found out about the Fourth Shinobi World War, while being further away on a remote island), involuntary Petrification and Transmutation (If someone absorbs his chakra while he's in Sage Mode they get turned into frog statues), Extrasensory Perception (Senses negative emotions), Plant Manipulation (Due to the life-giving nature of Yang Style, any wood constructs, like White Zetsu, that Naruto's near or that he touches grow into trees), Non-Physical Interaction (Pulled on his own soul), Large Size (Type 2, via Kurama avatar), Power Bestowal (Amped up a thousand shinobi by three times the chakra reserve of Kakashi Hatake), Flight, Self-Sustenance, Healing (Healed Might Guy after his body had disintegrated and Kakashi Hatake's eye after it was ripped out by Madara Uchiha), Sand Manipulation, Magnetism Manipulation, Sealing (via Shukaku ), Fire Manipulation (via Matatabi), Water Manipulation (via Isobu), Magma Manipulation (via Son Gokū), Air Manipulation, Statistics Amplification (via Kokuo), Acid Manipulation (via Saiken), Perception Manipulation (via Chōmei),  Elemental Manipulation (Fire, Water, Earth, Lightning and Wind Style, the five basic Nature Transformations, along with Vapor, Lava and Magnet Style Kekkei Genkai), Extrasensory Perception (Sensed Sasuke Uchiha from another dimension), Destruction, Durability Negation via Matter Manipulation, Power Nullification, Anti Regeneration, Elemental Manipulation (Truthseeker Orbs, which contain every Nature Transformation, can nullify all ninjutsu plus the Edo Tensei's regenerative abilities and have been compared by Hiruzen Sarutobi to Particle Style, which can disassemble you on a near molecular level), Non-Physical Interaction (Held open one of Kaguya's portals), Toon Force, Fourth Wall Awareness (Shows up in both Rock Lee's Springtime of Youth and Sasuke Uchiha's Sharingan Legend, where all the characters are depicted as gags)


Mind Manipulation, Illusion Creation, Sleep Manipulation, Status Effect Inducement (Tailed Beasts can snap their Jinchūriki out of genjutsu), Soul Manipulation (Pulled on his own soul), minor Chi Absorption (Draining him of his chakra has been proven difficult, due to the sheer size of it), Acupuncture (Accesses Kurama's chakra if his Chakra Pathway System suffers damage), Destruction, Durability Negation via Matter Manipulation, Power Nullification, Anti Regeneration, Elemental Manipulation (Ignores the effects of the Black Receivers and Truthseeker Orbs via Six Paths Sage Mode)

Stamina: Extremely High (Fought for the entirety of the Fourth Shinobi World War) to Substitutive (He can make clones of himself or the Nine-Tails that charge up the nature energy he's lost during a battle. He's used this strategy in his fights against the Six Paths of Pain and Sasuke Uchiha.)

Intelligence: Gifted (Talk no JutsuNaruto has been shown mastering quite a few jutsu and techniques through training, hard work and dedication within small periods of time, namely Shadow Clones, Rasengan and its' variations and Sage Mode) to Genius (Portrayed as a master strategist throughout the series)

Weaknesses: It's stated in the series that if a shinobi were to lose all their chakra they would die, although it's been proven a difficult task draining Naruto in specific, as he's constantly praised for his massive chakra pool throughout the series. The Nine-Tails wouldn't cooperate with Naruto until halfway into Shippuden. Incomplete Rasenshuriken damages him, although he's surpassed this through the use of Sage Mode, but adult Naruto can seemingly use it without Sage Mode too. Sage Mode has a timer on it, although Naruto has found a loophole around it. Sometimes acts without strategy or plan, although this hasn't been as prominent in his later years. Lost his Truthseeker Orbs in his battle against Sasuke Uchiha.

Retrieved from "https://character-stats-and-profiles.fandom.com/wiki/Naruto_Uzumaki_(Canon,_Composite)/Mewthreeeeee?oldid=131700"
Community content is available under CC-BY-SA unless otherwise noted.