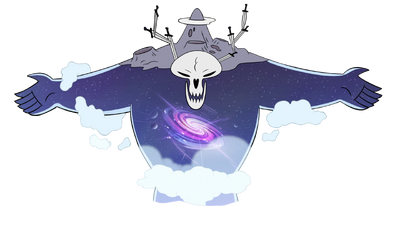 Omnitraxus Prime is primary protagonist (later antagonist) appearing in Star vs. the Forces of Evil. He is a member of the Magic High Commission created by Glossaryck to maintain the multiverse and aid Mewmans in understanding the delicate strands of space-time.

Origin: Star vs. the Forces of Evil

Attack Potency: At least Universe level+ (Is a living universe. As a member of the Magic High Commission, he is one of the most powerful beings in the series)

Weaknesses: Since Omnitraxus Prime is made of pure magic, he will cease to exist if the concept of magic is purged from reality.

Retrieved from "https://character-stats-and-profiles.fandom.com/wiki/Omnitraxus_Prime_(Canon)/Maverick_Zero_X?oldid=119756"
Community content is available under CC-BY-SA unless otherwise noted.