Papyrus is the younger brother of Sans, he is an eccentric young skeleton with dreams of popularity. He appears as being very confident of himself and his abilities, even calling himself The Great Papyrus as a show of his supposed confidence, however, he is very insecure, just wanting to have a true friend who likes him for who he is, and shares his love for puzzles and cooking. He is extremely hyperactive, being always on the move, always working hard on anything, like doing his puzzles, cooking, training or even nothing at all, Papyrus never sleeps, not even knowing what that word means. Papyrus' ultimate goal is to join the Royal Guard to be popular and then finally have people like him, and thus he stayed in front of Undyne's house an entire night and seeing his dedication decided to train him. Now, this would-be Royal Guardsman is being trained under Undyne in both fighting and cooking lessons, awakening his love for cooking spaghetti, although he has never tasted his cooking before. He acts as an unofficial Sentry for the town of Snowdin, even making his sentry station out of cardboard, alongside his brother, who is an actual sentry. He also seems to attract the attention of the Annoying Dog far more than any other character, with him constantly stealing his bones and annoying him, even having a shrine inside his kitchen, and Flowey, who finds him to be his favorite "toy" and even ends up living with him after the pacifist ending. He is one of the first people Frisk encounter when they exit the Ruins and finally finds a true friend in them even though they were human. His heart of gold even shines through during the Genocide Route, as he is the one monster who will opt for trying to stop Chara through friendship and kindness.

Name: Papyrus the Skeleton, The Great Papyrus (only refered to this by himself), COOLSKELETON95 (on the internet).

Attack Potency: Building level (Undyne says that he is very strong and that he would have already been in the Royal Guard had it not been for his personality, and thus should be stronger than the Ice Wolf, who throwns ice in the river, can harm Frisk even while holding back, he should be stronger than box Mettaton who easily pulverized a wall, should be comparable, if not superior, to Flowey who moved their elevator from the True Lab to New Home, should be comparable to both Mettaton EX, whose kicks are this strong and Knight Knight, who can create a star like projectile), possibly higher (Says that had he used his Special Attack Frisk would have been "blasted to" before cutting himself, he also is the only character being held back by four of Flowey's vines, while he only uses two on the rest).

Speed: At least FTL (Constantly trains with Undyne which means he most somewhat be comparable to her, can react, tag and even outspeed Frisk. Should be faster than Napstablook, who was able to close their blinds before the light reached them)

Lifting Strength: At least Class 5 physically (Should be physically stronger than the Ice Wolf due to being seem by Undyne as being fit to being a Royal Guard if it wasn't for his personality), likely Class 10 with magic (Can move many bones in his regular attack), Class 25 with Blue Mode. (Trains with Undyne on a regular basis which means he must have used his blue attack on her, implied to be already familiar with Undyne's own soul mode as well, reinforcing this idea; Undyne is capable of suplexing huge boulders).

Durability: Building level (Can tank hits from both Undyne and Frisk, his defense is equal to his attack on both of his stats).

Stamina: Very High (Once stayed in front of Undyne's house the entire night in order to be part of the Royal Guard, he never sleeps not even knowing how sleep. Thought that running 100 laps was a common exercise, should be comparable to Undyne)

Optional Equipment: All his puzzles, such as the Invisible Eletricity Maze, the several XOXO puzzles, the Multicolor Tile Puzzle, and the Gauntlet of Deadly Terror, that has a couple of spears, a cannon, a spike ball, a flamethrower, and the most dangerous, the Annoying Dog.

Intelligence: Gifted (Although he may lack common sense, like "solving" the horoscope, and may appear to have a childlike mind, he still has a suprising intelligence. He trained with Undyne where they trained even the most trivial things, he even used reverse psychology to get Undyne to befriend Frisk, and Undyne saw him fit to train Alphys. Knows enough about photoshop to make this image, reads complex puzzle books and goes through fighting scenarios on his spare time. Has made unumerous puzzles like Invisible Maze, the "X" and "O", and even a entire maze in front of his house where even Asgore got lost in it, even painted an entire rock formation almost flawless. He also seems to have a extremely good control of his magic, being able to make his attacks do zero damage, only enough to knock out someone (something not even Toriel can do), and having his bones being capable of even spelling words. Debunking Stupid Papyrus 1, 2, 3, 4 (He seems to act like he doesn't know about simple stuff when around his brother, probably to make him feel better), 5, 6).

Standard Tactics: Once Papyrus gets in a serious fight he starts off by throwing several blue bones at his opponent, then afterwards turns their SOUL blue (he may skip the blue bones with prior knoweledge). Once his opponent is blue he will then use various bones pattern to attack his enemy, using bones that move up and down to combinations of blue and regular bones, and all in between. Papyrus will continue using these bone attacks until some time passes, or he takes sufficient damage, in which he will atempt to use his special attack to finish off his opponent, in a more serious match, unlike the one against the human since he was conflicted against them, he might utilize more of his "completely regular" attacks, a combination of several bones ending with a giant one, instead of common bone patterns, ending with his blasters blasting their enemy away.

Weaknesses: Papyrus is too nice to actually hurt someone in a permanent way, thus always holds back and would rather talk with a killer than fight them, which is why Undyne never put him in the Royal Guard, cares far more about making his attacks look cool and be fair than beating his opponent unlike his brother. All monsters are weak to extreme killing intent from a powerful soul (like Chara), therefore the crueller the intentions of their enemies, the more their attacks will hurt them, and a monster defense will weaken if they don't want to fight.

Note 2: Although Papyrus special attack in canon is unknown due to the Annoying Dog stealing it, the added dialogue in the 2016 patch seems to imply it's a Gaster Blaster due to Papyrus "blasted to" line, which doesn't make sense if it's talking about regular bones, and the fact it was added in a patch and most of Gaster related stuff was added late in delevopment to tease Deltarune, there's also a Gaster Blaster like attack in Papyrus's box in the official artbook. So instead of just putting a "unknown" on anything about it I will go with this theory, and shall update the profile if any new info about it is revealed. 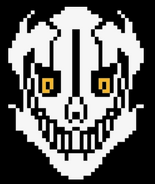 A Fan-Made pic of what is probably Papyrus "Special Attack", Credit to LuckyStudios

Papyrus "special outfit" that he always wears under his regular clothes

What is probably Papyrus "training outfit"

Papyrus gloating about his dreams of popularity

Papyrus's snow sculpture of himself

Papyrus at the pacifist ending, fulfilling his dream of driving a car