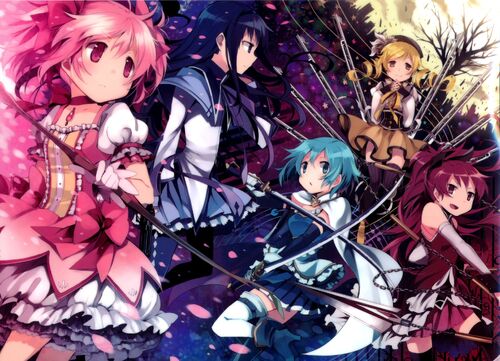 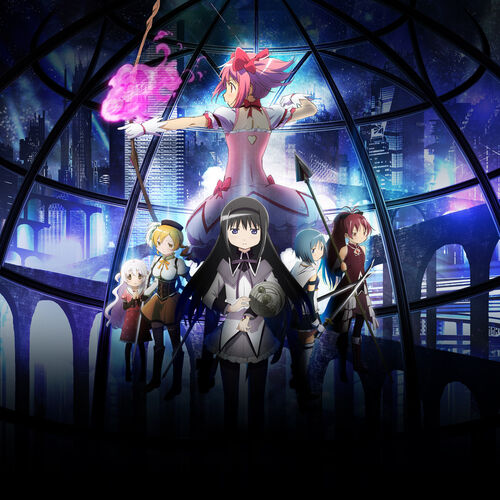 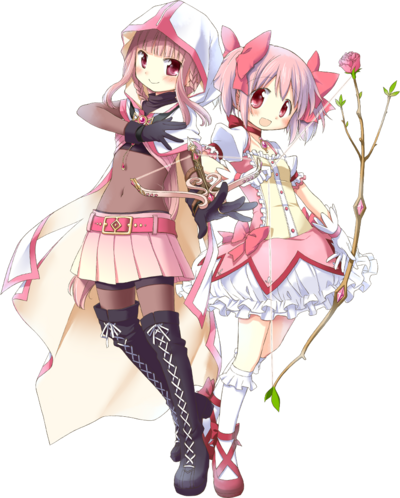 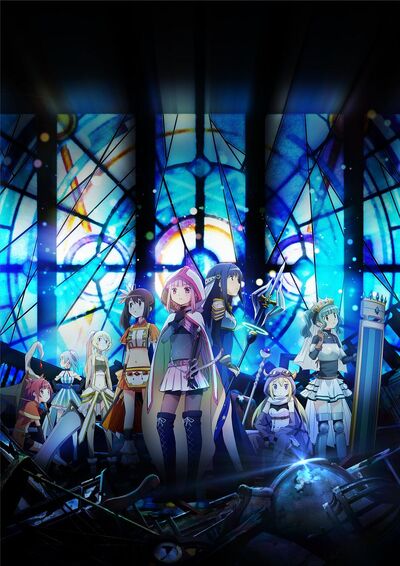 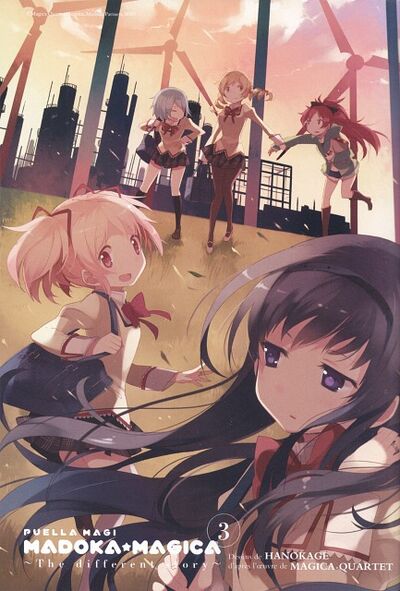 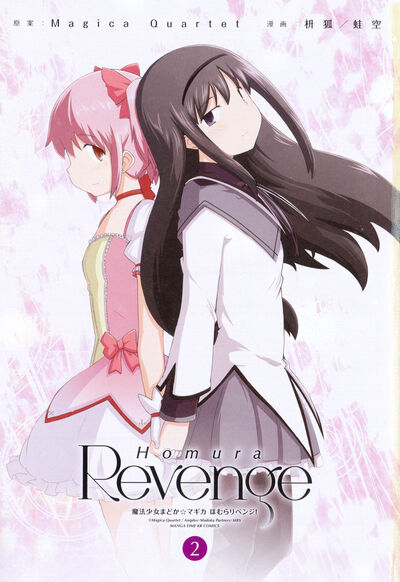 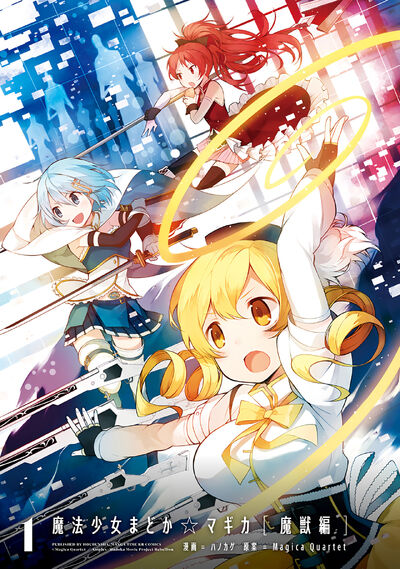 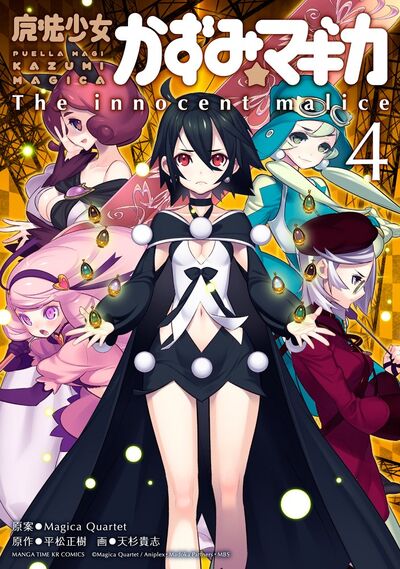 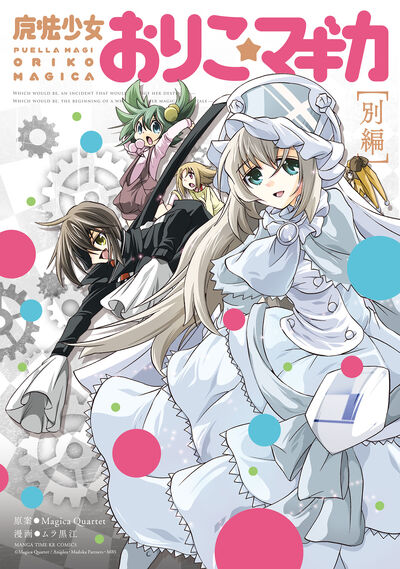 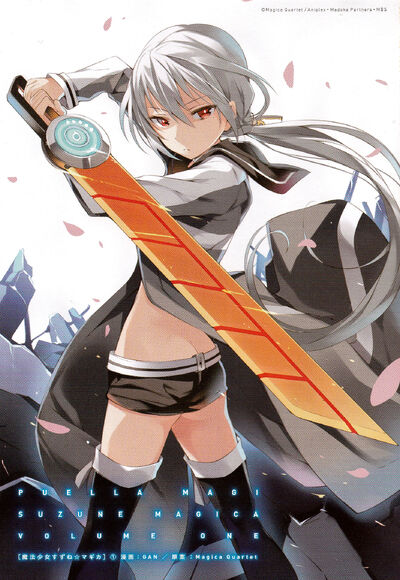 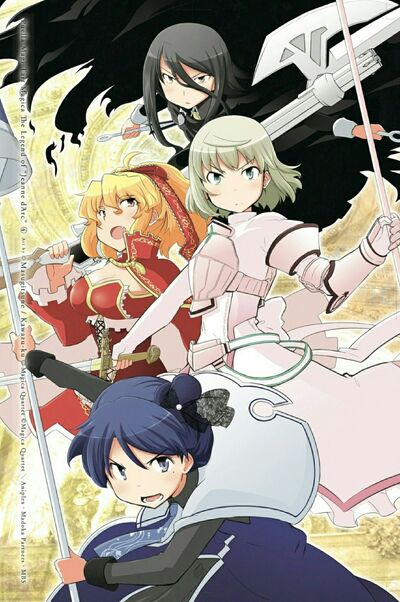 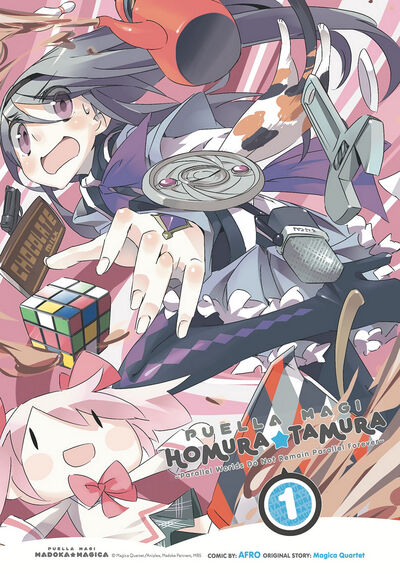 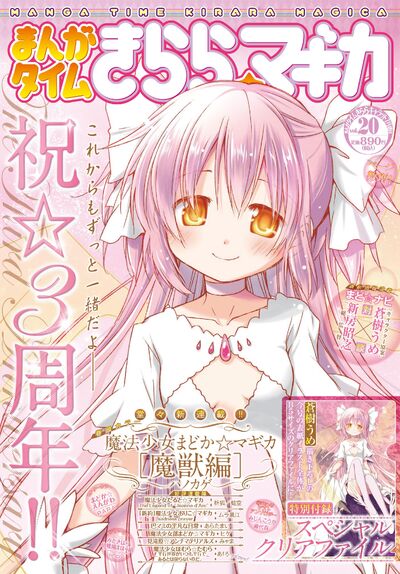 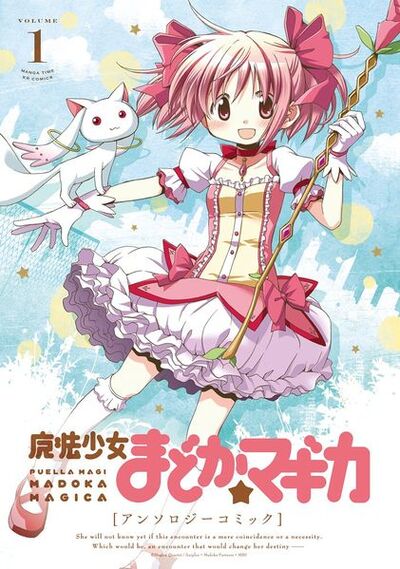 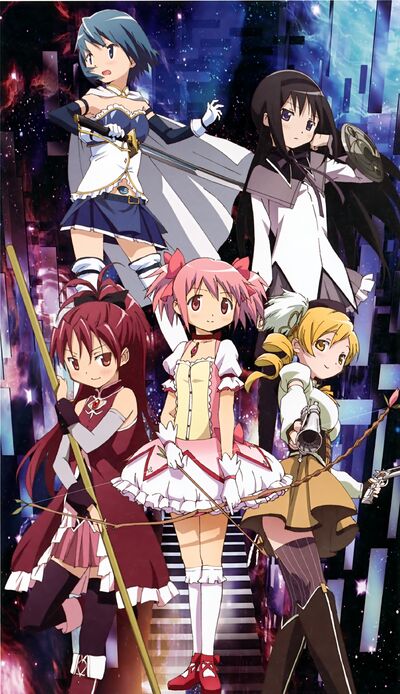 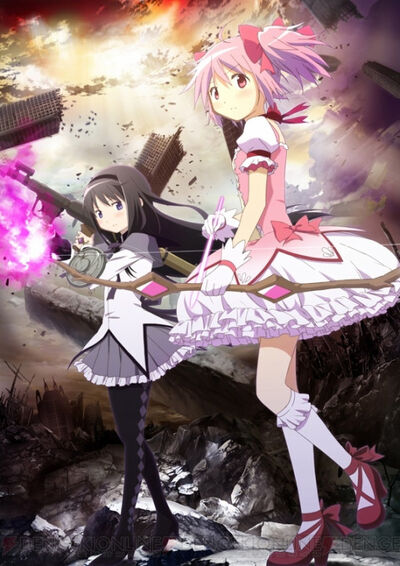 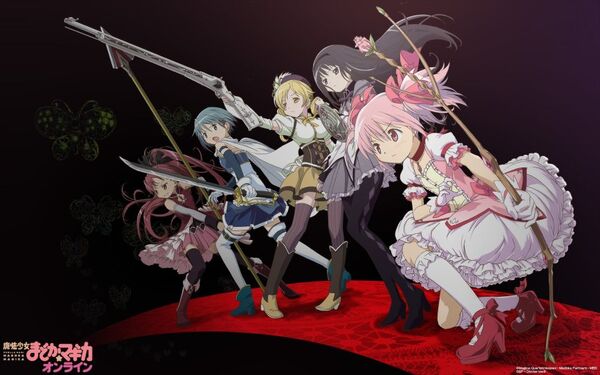 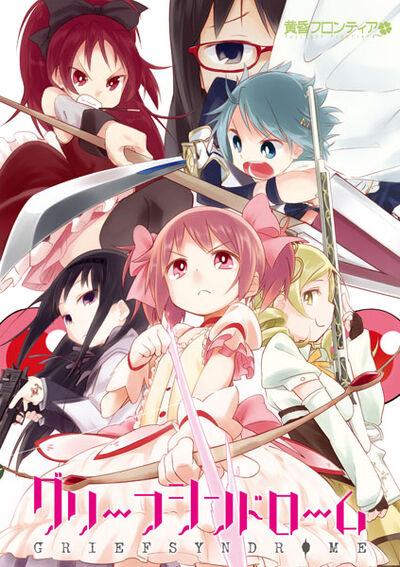 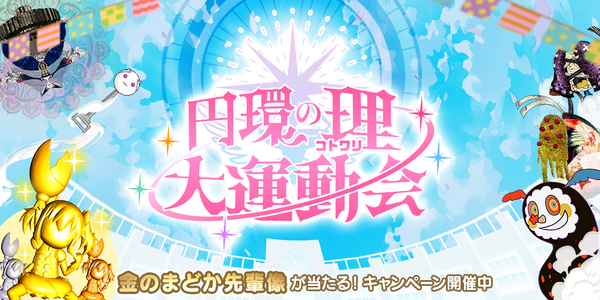 Puella Magi Madoka Magica: Puella Magi Madoka Magica was originally released as an anime on January 2011, produced by SHAFT and Aniplex under Atsuhiro Iwakami, Akiyuki Shinbo and Gen Urobuchi. The anime contains 12 episodes in total, which were later divided into two movies: Puella Magi Madoka Magica: The Beginning Story and Puella Magi Madoka Magica: The Eternal Story. A manga adaptation was released on February 2011 and contains some differences with the anime. The protagonist is Madoka Kaname, a 14 years old girl who live in Mitakihara city, along with her father, her mother and her little brother. One day, she has a strange dream of her city being destroyed by a mysterious figure covered in darkness, and a dark-haired girl trying to stop it. In that dream, a little white creature asks Madoka to make a contract with it, because she has enough power to stop all of that destruction. The following day, Madoka goes to school with her two friends, Sayaka and Hitomi. There she meets the girl of the dream, whose name is Homura Akemi and who is revealed to be her new classmate. Homura asks Madoka if she is happy of her life and if she loves her family and her friends. That afternoon, Madoka heards a voice calling her help, and she walks in the voice direction. There, she meets the little creature of her dream being wounded by Homura. Madoka, with Sayaka's help, saves it and escapes from Homura. The two friends found themselves in a strange place, where they are attacked by horrible creatures. Luckily, they are saved by a blonde girl, whom easily killed all of those creatures with several guns. The girl then reveals to be Mami Tomoe, a third-year student at Mitakihara Middle School and a magical girl, whose aim is to fight witches, evil creatures born from curses, who absorb human lives and are responsible for most suicide and murders. Mami invites Madoka and Sayaka to her house, where she tells them the dangerous life of a magical girl.

Puella Magi Madoka Magica: Rebellion: Puella Magi Madoka Magica: Rebellion is the third movie of the Puella Magi main series, released on October 2013 in Japan. The movie acts as a sequel to the main anime and takes place in a fake Mitakihara City inside Homura's Soul Gem. Here, Madoka and the other magical girls fights creatures born from human's despair known as Nightmares, having no recollection of witches and what happened before. However, Homura notices something wrong with the city and its citizens, and after a few investigations she discoveres that Madoka and the other people are trapped in an alternative dimension. After Homura discoveres it, Kyubey comes forward and tells Homura that she had fallen into despair and when the girl was about to turn into a witch, Kyubey separated Homura's soul gem from her body in order to attract Madoka and catch her. Homura tries to stop Kyubey in every possible way, but the Incubator continues to resurrect itself over and over again. Homura then forces herself to complete the witch transformation at the cost of having her soul destroyed, to protect Madoka from the Incubators, and becomes Homulilly. At that moment, Sayaka and Nagisa reveals themselves and tells Kyubey their plan to trick the Incubators and return Madoka her memories and powers. After a long battle, the girls destroy the barrier that separates the real world from Homura's pocket dimension and Madoka is able to receive her powers and memories back. When she is about to reach Homura, the latter releases the curse inside her soul gem, which absorbs some of Madoka's powers and memories, rewrites reality and turns Homura into a demon, a being which is even a threat for the goddess form of Madoka Kaname. She then returned Madoka being a normal girl, but she realizes that Madoka will eventually remember the truth and regain her divinity, accepting that they might become enemies in the future.

The Law of Cyclimpics: The Law of Cyclimpics is a spin-off mobile game released on April 1st 2019 for the April Fool day. The game features three minigames: Sprinting (in which you have to run faster than a witch [either Shin, Gertrud or Charlotte] and reach the finishing line before being catched by her), Shot Put (in which you have to throw a Kyubey hammer as far as possible) and Witch-felling (in which you have to defeat witches [either Patricia, Durbar or Walpurgisnacht] and their familiars before time runs out). There are 11 playable characters in the game (Iroha, Yachiyo, Tsuruno, Sana, Felicia, Madoka, Homura, Sayaka, Mami, Kyoko and Madoka-senpai), each of them with their own skills and weaknesses. They can be unlocked by gaining new personal high scores or by sharing your high scores with others on Twitter.

The Law of Cyclimpics feats

A Circadian Manipulation feat in the Magia Record anime

How big is Ai's world?

Powers of the Verse

The Puella Magi verse is a very powerful verse, and is among the strongest anime verses of all time. Even low level magical girls and witches are able to create dimensions with starry skies and are able to attack and react much faster than what the human eye can see. Due to the immense gap between the low end (2.2586e+57 Joules) and the high end (1.268e+66 Joules) of the 4-A tier, even very powerful magical girls and witches are tier 4, but they are on a much higher level than low tier characters. Then we reach the top tier of the verse, which includes Walpurgisnacht, Wraith Madoka, Kriemhild Gretchen, Kyoko Sakura and Sayaka Miki (both of them from Homura Tamura); these characters range from At least 4-A to 3-A. Finally we reach the god tier of the verse, which includes tier 2 characters, most of them being 2-A/High 2-A, like Ultimate Madoka, Devil Homura, Tart (final form), Law of Cycles Sayaka, Law of Cycles Nagisa, The Witch of Despair and the grotesque Giant Wraith. The verse is also incredibly fast, having a few cases of MFTL+ feats for tier 3 and tier 4 characters (Momoko, Itzli and Yachiyo), and Infinite to Omnipresent feats for tier 2 characters. The verse is also pretty haxxed, having incredible powers since tier 4. Magical girls have superhuman characteristics and are able to use powerful magic as long as they don't taint their soul gem. Each magical girl has unique skills, deriving from her wish with Kyubey. Witches have unique abilities too, but they also share incredible powers like Mind Manipulation (which includes Suicide Inducement) and Life Absorption, and they are powered by negative emotions. Reaching the god tier of the verse, we have powers that are able to change the fabric and the laws of reality itself, like Conceptual Manipulation, Law Manipulation, Dimensional Manipulation, Causality Manipulation and Probability Manipulation, as well as powerful defensive skills like Mid-Godly Regeneration (High-Godly for some characters) and Immortality (Types 5 and 9).

The Puella Magi Verse has many different kinds of magic, due to the different wishes of magical girls. In Tart's event in the Magia Record game, we can see that Mitama gives Iroha and Yachiyo two special candles which, according to her, can help people who sniff its flavor to see good dreams. During the event, these candles have shown to grant different powers and abilities, mainly in relation with a black magic grimoire used by Corbeau in the past.

Note that not all of the characters who possess the candles can use the same powers. Mitama can only help people to see good dreams, Iroha and Yachiyo can travel in the dream and communicate with people of the past, while Corbeau can almost use all the powers, mainly due to the fact that the uses the black grimoire too. 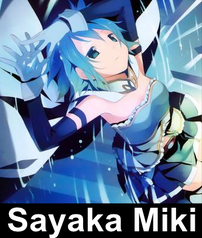 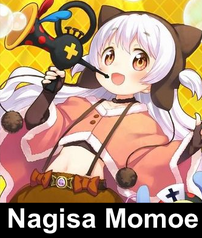 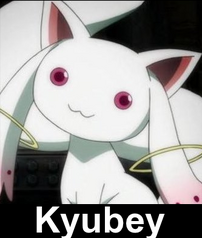 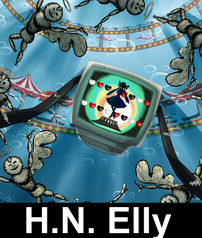 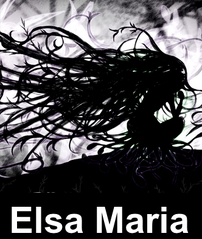 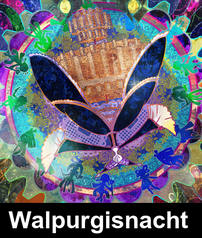 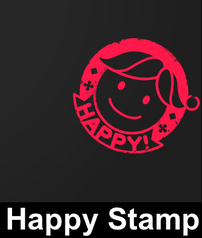