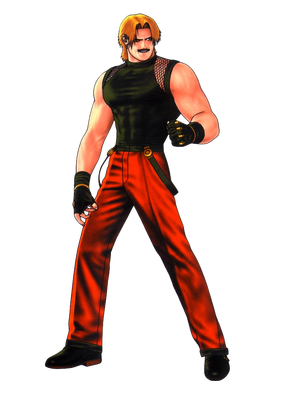 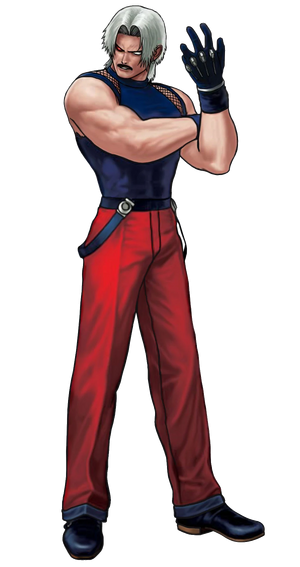 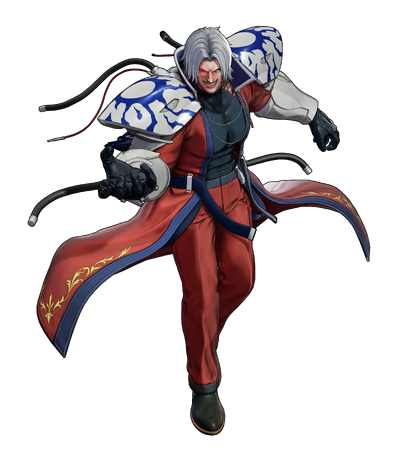 Rugal Bernstein is the head of a large international weapon smuggling cartel who loves to prove that he is the strongest, something he thought until he fought Goenitz who defeated Rugal in a single attack that destroyed Rugal's right eye, however, Goenitz was impressed that Rugal didn't die and gave him a small amount of Orochi's power so that he could see if Rugal could act as a suitable host for Orochi when the Orochi Seal was broken.

Rugal would test his power by slaughtering Heidern's military unit, killing both his wife and daughter in front of him before removing one of Heidern's eyes with his bare hands as a way to make sure he would never forget him.

Eventually, Rugal would host the King of Fighters tournament under the mysterious pseudonym "R" in order to find strong fighters to kill and turn into statues, however, he was defeated by Team Japan would blow himself up along with his base. Rugal would survive this blast due to the Orochi powers he was given by Goenitz with the only injury he sustained being the loss of his right arm.

He would host the next King of Fighters tournament in order to get revenge by using a brainwashed Saisyu Kusanagi against the leader of Team Japan, Kyo Kusanagi who was Saisyu's son. Rugal would have a rematch with Team Japan while using his Orochi powers, turning him into his Omega Rugal form, however, he was still defeated and tried to use more of the Orochi power he had been given but since he wasn't a part of the Orochi bloodline, his body couldn't contain the power and it quickly overwhelmed and destroyed his body, killing him for real this time.

Later in the King of Fighters XIV, Rugal's soul would be absorbed into Verse's body and released upon the creature's defeat, allowing Rugal to be revived after being killed like Shermie, Yashiro and Chris were.

Powers and Abilities: Superhuman Physical Characteristics, Immortality (Type 3 & 4), Regeneration (Mid-Low, Regenerated after ripping off large pieces of skin off of his chest with his hand, possible Low-Mid, seemingly no longer has his robotic arm anymore suggesting he regenerated his arm back unless it was retconned from the series, possible Mid-High, his appearances after the King of Fighters 95' (Such as the King of Fighters 98', the King of Fighters 2002 Unlimited Match, the King of Fighters: Sky Stage, Neo Geo Heroes: Ultimate Shooting, the King of Fighters XIII and the King of Fighters XV) might hint that he is able to completely regenerate after his body was completely destroyed by the Orochi power), Resurrection (Since Rugal has a portion of the Orochi power inside of him, he can always be resurrected if Orochi wishes him to be like Mature and Vice were, It's shown that if Orochi is released from his seal then Rugal gets resurrected), Non-Physical Interaction (Is able to interact with Vice and Mature who are ghostly spectres), Martial Arts (Rugal has officially been stated to be a master of all fighting styles), Chi Manipulation, Energy Projection (With Kaiser Wave, Rugal can fire a large wave of chi at his opponent), Statistics Amplification (Can increase his power by draining chi from the Earth, Can increase his power by using his Orochi powers), Air Manipulation (With Repuken, Rugal can fire a condensed projectile made of air that travels across the ground), Gravity Manipulation, Electricity Manipulation (With Gravity Smash, Rugal can fire a ball of condensed gravity and electricity at his opponent), Forcefield Creation, Attack Reflection (With Dark Barrier, Rugal can create a forcefield that protects him and reflects any projectile that hits it), Absorption (Can absorb chi from others and the environment), Flight, Power Mimicry (Can copy the fighting style and techniques of others by watching them such as Geese Howard's Hakkyokuseiken and Wolfgang Krauser's House of Strolheim martial arts styles), Extrasensory Perception (Rugal can sense other people's chi), Empowerment (Can become stronger by draining chi from the Earth, Can become far stronger with Orochi's power), Danmaku (Can create a large number of projectiles using his chi), Statistics Amplification, Transformation (Can use the power of Orochi in his body to turn him into Omega Rugal who is stronger than his normal form), Dimensional Travel, Time Travel (In Neo Geo Heroes: Ultimate Shooting, Rugal travels across space and time), Cyborgization (Partial, Has a robotic eye and later a robotic arm and parts of his back), Self-Destruction, Explosion Manipulation (Whenever Rugal loses, he pulls out a switch that triggers a large number of explosives that blows up the area around Rugal), Resistance to Mind Manipulation, Emotional Manipulation (Rugal's body can handle the Orochi power without turning into a mindless beast like Iori Yagami and Leona Heidern do in their Orochi Forms, something that only those from the Orochi bloodline can manage), Analytical Prediction (Maxima has stated that the fighters in the King of Fighters tournament never behave the way his analytical data suggests they will), Heat Manipulation, Ice Manipulation (Is unaffected by Kula Diamond's ice powers which can instantly freeze the area around her when activated), Fire Manipulation (Is barely effected by powerful fire attacks from the likes of Mai Shiranui, Kyo Kusanagi, Iori Yagami and K'), Electricity Manipulation (Can shake off powerful electricity based attacks from the likes of Benimaru Nikaido and Blue Mary), Purification, Soul Manipulation, Sealing, Power Nullification (Despite fighting Iori Yagami, Kyo Kusanagi and Saisyu Kusanagi multiple times and having the Orochi power inside of him, he never felt any of the effects of Kusanagi Sword's or the Yasikani Jewel's purification which would purify the Orochi powers from Rugal's soul)

Attack Potency: Multi-Universe Level (Can fight on par Kyo Kusanagi, Goro Daimon, Benimaru Nikaido, Mai Shiranui, Terry Bogard, Athena Asamiya, Kula Diamond and Iori Yagami, Managed to defeat Saisyu Kusanagi and Heidern, Scales to people like Dolores, Ash Crimson and the members of Team Orochi who all came from a higher plane after their deaths and resurrection, Scales to Nakoruru who could defeat Shizuka Gozen who created her own realm of existence called Eternity and is able to freely able to manipulate it, Enja and Suija who were able to destroy and create and maintain an entire universe respectively and Yuga the Destroyer who fused the Demon Realm and the Human Realm together) | At least Multi-Universe Level (Is far stronger as then he was before, Should be comparable to Orochi Leona, Orochi Iori, Orochi Yashiro, Orochi Shermie and Orochi Chris)

Speed: FTL (Can dodge attacks from Elisabeth Blanctorche who uses light as her main method of attacks, Can react to characters like Kyo Kusanagi who is able to block all of Orochi's light-based techniques, Scales above Takuma Sakazaki and Bao who were both easily able to intercept a laser fired from the Zero Cannon which fired lasers at a fraction of the speed of light) | FTL (Is far faster than he was before)

Lifting Strength: Class 5 (Can lift up Chang Koehan while he is carrying a large iron ball) | Class 5 (Is far stronger as then he was before)

Intelligence: Gifted (Runs a worldwide weapon smuggling organisation, Is able to perfectly use a martial arts technique after seeing it once)

Weaknesses: Using too much of Orochi's power will destroy Rugal's body completely, Rugal's resurrection requires the outside assistance of Orochi or other Godly beings, Is overly cocky and egotistical to the point of fighting with only a portion of his power when he challenges his opponent for the first time even if the said opponent is considered one of the strongest fighters in the world