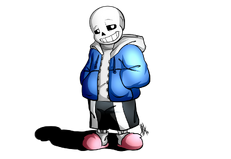 Sans is the older brother of Papyrus. He is a extremely lazy skeleton with a love for bad puns, jokes, pranks, junk food like Grillby's, quantum physics and science fiction (especially when it's real). Everyday Sans also reads bedtime storys for his little bro, as well as go to the RUINS door to pratice knock-knock jokes with Toriel, where he accepted her promise to protect any humans that shall fall into the underground even without knowing her name, just because she shared his love for bad puns. He also seems to have worked with Alphys before, with him knowing about her amalgamates and she calling him a good friend in one of the endings. Sans is a very easygoing person thus being a very popular individual, but he hates making promises out of fear of breaking them. Sans might try his best into avoiding any type of work but he will give anyone who faces him a hell of a bad time.

Name: Sans the Skeleton, is also called various nicknames such as Lazybones and Smiley Trashbag.

Powers and Abilities: Superhuman Physical Characteristics, Absorption (Any monster should be capable of absorbing a human soul), Inorganic Physiology (All monsters are made of magic instead of physical matter), Undead Physiology (Type 1; Is a skeleton), Analytical Prediction (Could tell how many times Chara died and that Chara had spared him via the look on their face), Danmaku, Soul Manipulation (All monsters attack the soul directly), Dimensional Storage (Every citizen of the Underground should have access to the dimensional boxes, even via their phones), Healing (Unlike regular food, monster food turns into energy when eaten, thus healing any damages to the body and soul), Magic, Non-Physical Interaction (Magic is capable of harming ghosts, which are incorporeal), Multiple Languages (Is capable of understanding monsters who speak different languages like Froggit), Bone Manipulation, Afterimage Creation (Is show to be in multiple places at once), Toon Force and Air Manipulation (Has a "self sustaining trash tornado" in his room), Durability Negation and Invulnerability Negation (Sans is completely able to ignore Chara's defense and natural invulnerability), Energy Projection (Via Gaster Blasters), Genius Intelligence, Glyph Creation, Gravity Manipulation and Telekinesis on the SOUL (via Blue Mode), Fourth Wall Awareness (Calls out the player in a ending, does the same at the end of the demo, also breaks it constantly in official trailers), Weapon Creation (Can create Gaster Blasters to use in battle), Information Analysis and Clairvoyance (With just a look Sans is able to see how much LOVE and EXP Frisk has), Preparation, SOUL KARMA (A poison like effect given on all of Sans's attacks based on the sins of his opponent), Stealth Mastery (Is shown to be able to sneak up on people), Instinctive Reactions (Can dodge even when he is asleep), Teleportation, Spatial Manipulation (Can completely manipulate the battle box, like extending it to make Chara fall, can make a basket of fruit far bigger than it should be), Flight (Like his brother, he can float, as seen when when he pretended to be tall enough to play dog poker), Cosmic Awareness (Knew from the look of Frisk's face that they heard his speech before, like his brother probably felt deja-vu from seeing Frisk after a reset happened, was aware of Flowey/Frisk messing with the timelines), limited Technopathy (Can make a phone ring indefinitely) and Law Manipulation (Sans is shown multiple times breaking the FIGHT mechanics, which are show to be canon several times, such as dodging attacks, attacking on the enemy's turn and even being able to have his turn forever), possibly Time Stop (Sans seemingly stops time during his hangout in Griiby's), Resistance to Fear Manipulation (Wasn't afraid of Chara, even though they scared Doggo with their presence even though he couldn't even see them or know if there was even someone there and scared Flowey even though the flower believed he couldn't feel anything), Extreme Cold and Extreme Heat (Is able to go through Snowdin/Hotland, both stated to be extremely hot/cold by several characters, without any problems), Soul Manipulation (All monster bodies are directly attuned to their souls, therefore any damage done to their body affects the soul), Radiation Manipulation (Monsters drink radioactive waste as energy drinks).

Attack Potency: Wall level (Is stronger than a low determination Frisk, who tanked Undyne's house exploding), can bypass conventional durability with his attacks.

Speed: At least FTL (Should be the fastest non god tier character in the verse, capable of dodging Chara's attacks even while asleep, even with them knowing exactly where he would dodge them. Should be faster than Napstablook, who was able to close their blinds before the light reached them).

Lifting Strength: Unknown physically, Class 25 with Blue Mode (Should be comparable to Papyrus, who trains with Undyne on a regular basis which means he must have used his blue attack on her, implied to be already familiar with Undyne's own soul mode as well reinforcing this idea, Undyne is capable of suplexing huge boulders).

Durability: Wall level (His DEF is the same as his ATK, superior to low determination Frisk, who tanked Undyne's house exploding).

Stamina: Above Average (He is capable of fighting Chara for awhile before getting tired).

Range: Standard melee range, at least tens of meters with his magic, higher with Gaster Blasters, tens of kilometers with teleportation.

Intelligence: Extraordinary Genius (Sans is shown multiple times to have an extreme knowledge of science and physics, normally reading quantum physics books in his off time, Papyrus also states that Sans loves science and that he studies astronomy. He has multiple blueprints of various inventions on his workshop, as well as a possible time machine, the workshop showns that he probaly was scientist or even an assistant to the previous Royal Scientist. He is shown to run reports of multiple different timelines, fighting out about the anomaly that SAVE and LOAD was doing to space and time. Implied to have built the dimensional boxes across the underground, due to being named "obj_sansbox" in the game's code).

Standard Tactics: Sans starts off by observing his opponent body language to determine how they act and what they are thinking, then using his info analysis and clairvoyance to know what his opponent was doing before fighting him and what their stats are, in order to ajust his combat style depending on what information he got, such as when he purposely fought in the most frustating way he could think of in order to convince the fallen child to give up since he knew he couldn't kill them permanently. When entering combat Sans will start off with his strongest attack (a combination of his blue attack, bones right afterwards and a couple Gaster Blasters in different patterns, all dealing KARMA) to kill his opponent without them being capable of reacting in time and thus ending the fight quickly, afterwards he continues using all his magic in different combinations to beat his opponent, while dodging his enemy attacks in any way he can using his instinctive reactions and other abilities, such as his teleportation, if he feels necessary. Sans does not follow a honor code and will do everything in his power to beat his opponent, such as cutting himself off to attack someone when they aren't expecting, attacking on someone's turn, tricking someone to lower their guard in order to backstab them, and even doing absolutely nothing.

Weaknesses: Sans is extremely lazy, thus making it harder for him to give his all due to the fear of everything being reset. All monsters are weak to extreme killing intent from a powerful soul (like Chara), therefore the crueller the intentions of their enemies, the more their attacks will hurt them, and a monster defense will weaken if they don't want to fight. 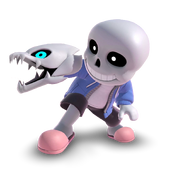 Sans left eye flashing. Usually occurs when he is going all out

Sans playing the Trombone to annoy his brother

Sans's snow sculpture of himself

Sans at the pacifist ending