Shade the Echidna is an antagonist later turned protagonist in Sonic Chronicles: The Dark Brotherhood. She served Imperator Ix as the lead member of the Marauder forces and was tasked to stop Sonic and his friends, she later joined them after hearing Imperator Ix plan and then being saved by Knuckles.

Name: Shade the Echidna, Procurator Shade, Shade of the Nocturnus

Speed: Massively FTL+ (Swifter than Knuckles and can match pace with Sonic)

Intelligence: Having been trained under the Nocturnus Military, Shade is a disciplined and powerful fighter. Even her clan's leader, Imperator Ix, holds her skills in high regards and acknowledges her as his finest warrior. She is highly adept in stealth and infiltration, a master strategist, and an expert martial artist capable of taking down Knuckles the Echidna. 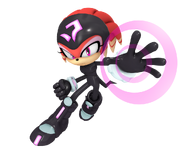 Unmasked Shade.
Add a photo to this gallery

Retrieved from "https://character-stats-and-profiles.fandom.com/wiki/Shade_the_Echidna_(Canon,_Game_Character)/Maverick_Zero_X?oldid=59741"
Community content is available under CC-BY-SA unless otherwise noted.