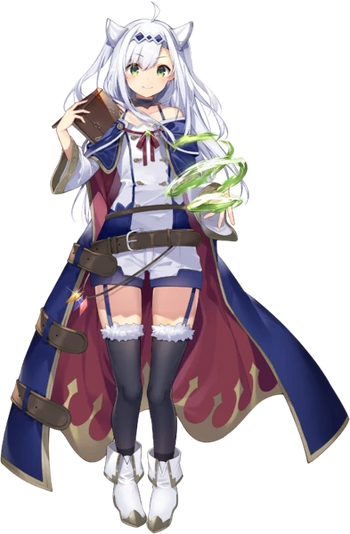 Sistine Fibel is one of the main heroine's in Akashic Records. Sistine's dream is to become a powerful mage after learning about the fundamental aspects of magic and finally discover the secrets of Melgaliu's Sky Castle, which supposedly no one knows, in order to fufill her grandfather's dream, who spent his entire life trying to figure out its secrets but never could.

Powers and Abilities: Superhuman Physical Characteristics, Martial Arts (Is being trained by Glenn in the imperial fighting style), Magic, Gravity Manipulation (Can fly by manipulating gravity ), Flight (Via flight spell), Statistics Manipulation (Can manipulate the speed in which she casts her spells), Electricity Manipulation/Paralysis (Can use the basic shocking bolt, which stuns the enemy with lightning. Can strike with natural lightning as well), Fire Manipulation (Anyone can use fire manipulation), Ice Manipulation (Can freeze people in ice), Law Manipulation, Text Manipulation, Physics Manipulation and Conceptual Manipulation (Magic is the study of the worlds principles. It is the force that rules and governs the structure of the world. Magic is something that allows humanity to find their way into a higher plane of existence and allows magic users to intervene upon the principles of the world. Can manipulate the very fundamental properties of magic and change the form magic takes, such as manipulating the texts within magic to make a certain spell do something completely different), Non-Physical Interaction (Magic can harm spirits), Air Manipulation (Shred Tempest creates a storm and unleashes countless blades of air), Power Nullification and Void Manipulation (Basic magic can nullify weapons and magic attacks, returning them into a state of nothingness), Transmutation (Shown here), Sleep Manipulation (Mental magic allows for the ability to put people to sleep), Mind Manipulation (Mind Manipulation is considered a basic ability for her), Madness Manipulation (Type 2; Can break minds through mind manipulation), Empathic Manipulation (Mind based abilities can turn others into perverts), Limited Illusion Creation (Has basic understanding of self-illusions but not to a military level like Glenn), Shapeshifting, Earth Manipulation (Glenn taught his students to create earth elementals), Invisibility (Glenn taught students to use invisible hands), Resistance to Magic (The stronger a character is the more they are able to resist magical abilities. Techncially, she should be resistant to all offensive magicial abilities previously listed, as it is shown in the verse that characters can amplify their resistance to magical abilities), Fire Manipulation, Ice Manipulation, Electricity Manipulation (The spell Tri resist grants resistance to the basic elements), Mind Manipulation, Sleep Manipulation, Madness Manipulation and Empathic Manipulation (Can increase her mental defenses to resist mind based abilities. Should be somewhat comparable to Rumia, who has greater mental resistances than Glenn, being able to resist being controlled by Demon generals) | Same as before to a much higher extent, Blessed (Blessed by the Wind God), greater Conceptual Manipulation (Gained control over the concept of wind magic, which is the strongest affinity of magic.), Regeneration Negation and Immortality Negation with Wind Manipulation (True-Godly; Her Wind Manipulation assisted in killing The Demon Lord who has greater regeneration than Al Khan.)

Attack Potency: At least Mountain level to Small Planet level (A fireball can flatten a mountain and a basic lightning strike can split the earth in half), Planet level with military magic (Is being trained by Glenn in the military style, having showcased low level military spells which are stated to be far stronger than the strongest of regular spells. B ranked military spells can destroy the earth) | At least Mountain level to Small Planet level, Planet level with military magic (Far stronger than before, and is stated to be far more powerful than Glenn), High Outerverse level with Wind Manipulation (Her Wind Manipulation was stated to be at the same level as Titus and Celica, and with it she assisted Celica enough to kill Titus.)

Speed: At least Infinite (The Corridor of Stars is repeatadly stated to be an infinite space. Glenn, Sistine, Re=L and Rumia crossed the corridor), likely Irrelevant (Comparable to Rumia, who existed and moved in a place with no concept of time time, and no concept of up, down, left and right)

Striking Strength: Planetary class (Is being trained by Glenn in the military hand-to-hand style of combat, and can sometimes harm him) | Planetary class

Durability: Planet level (Can tank magical attacks from those comparable to her, and has fought a imperial mage who have spells that can destroy the planet) | Planet level (Far more durable than before.)

Stamina: Above Average (Female students naturally have more mana and thus more stamina than male students) | Higher than before

Intelligence: Gifted; Is consistently portrayed to be the most gifted student of Glenn Radars. She is able to understand the his teachings and more military level of abilities easier than other students. She is also being trained by Glenn in the imperial hand-to-hand combat style; learning martial arts for when magic is no longer an option

Weaknesses: Gets flustered really easily and can doubt her skills | None notable

Note: She did almost nothing against Al Khan, only acting as a support, so she in no way scales to a "far higher" rating in her first key.