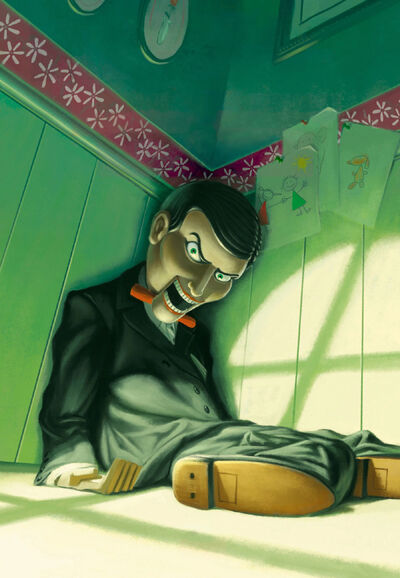 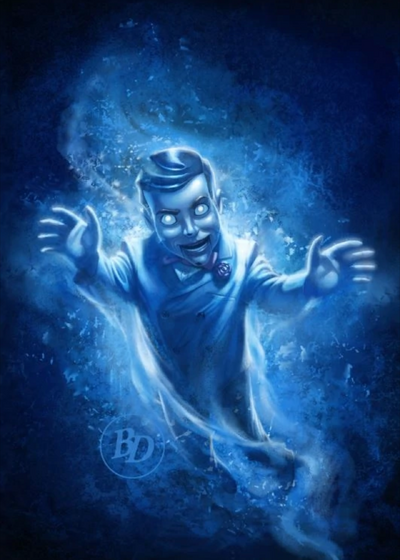 Slappy is a possessed doll created in the late 1800s by an evil sorcerer who made him out of coffin wood. Later on said sorcerer died and put his soul into Slappy, terrorizing families. He is also the mascot of the Goosebumps franchise, appearing in several books, TV Episodes, movies and video games.

Resistance to Mind Manipulation and Soul Manipulation (Survived the effects of The Mind Stealer, which can steal both the mind and soul and has claimed 20 people's lives. Is said that his soul is unstoppable. Lacks a brain), Death Manipulation (Survived a spell that was specifically designed to kill him for good in Slappy's Nightmare), Electricity (Withstood 400 volts of electricity, its takes 110 volts to kill a person), Fire (Can remain unaffected when riding the Wheel of Fire in Panic Park, which is a carousel that is constantly on fire), Biological Manipulation, Blood Manipulation, Bone Manipulation and Disease Manipulation (Due to being a living inorganic ventriloquist dummy that doesn’t have organs), Fear Manipulation and possibly Social Influencing (Unlike other creatures such as The Beast from The East. He wasn't affected by The Haunted Mask's fear inducing effects if The Haunted Mask is being worn during the player's conversation with him. This happens in the Goosebumps computer game made in 2015. In an ad for Slappy's Monster Madness, he quickly recovered from witnessing "the scariest creature on the planet" which would have given the entire world "Goosebumps for life"), Madness Manipulation (Types 1, 2, 3 and 5; Is an inorganic dummy, has resistance to Mind Manipulation and is unaffected by The Haunted Masks' madness inducement even when looking at it for a long period of time), Absorption (In a few pieces of media he seems to covered in Monster Blood without being effected. Can eat blood sandwiches in Goosebumps: HorrorTown with no harmful effects), BFR and Sealing (In the first Goosebumps movie he was capable of interacting with the real world while stuck in his manuscript. In the game Goosebumps Dead of Night he escaped the book by himself and is said that the book can no longer contain him), Status Effect Inducement/Body Puppetry (Recovered from Goldie's spell that made Slappy bend himself into a pretzel-like shape), Magic (Recovered from sorts of spells. Including spells that were specifically designed to kill him for good), Curse Manipulation (In one of the ads of Slappy's Monster Madness he covered from a spell/curse that turned him black and white), Plot Manipulation (Transcends the plot due to transcending the books), Transmutation and Corruption (Unaffected by his own chant, which said incorrectly will turn the user into a chicken. In Slappy's Monster Madness he recovered from being turned into a black and white version of himself), Energy Projection and Vaporization (In Goosebumps: Night of Scares. Him along with the other monsters are unaffected by the laser beams shot out of by the Annihilator 3000, said lasers can also make things explode), Power Nullification (Recovered from a spell that was specifically designed to kill him for good, meaning it would negate the abilities that would bring him back), Total Event Collapse/Destruction (Survived the destruction of the manuscript he was trapped in), Existence Erasure (Survived having his mind "erased" by the Mind Stealer), The effects of the manuscripts (Resisted the effects of the manuscripts. This includes Conceptual Manipulation [Type 2], Reality Warping, Plot Manipulation, Law Manipulation, Regeneration Negation [Mid-Godly, possibly High-Godly], Acausality Negation [Up to type 4], Power Nullification, Statistics Reduction, Resistance Negation, Immortality Negation [All types], Sealing, BFR and Reactive Evolution Negation)

Attack Potency: Low Multiverse level (Can harm and intimidate R.L. Stine who created the entire Goosebumps verse, which contains many universes, alternative timelines and dimensions such as the shadow realm, the many alternative realities in Don’t Go to Sleep!, the comic book world, the grey world, the dream world, an alternative universe where animals have swapped with humans in Elevator to Nowhere, among many others. Most books can be considered their own universes,there are over 230 books in the series), possibly Low Complex Multiverse level at max (R.L. Stine transcends the Goosebumps verse and sees it as fictional stories, unlike the other monsters he can escape into the real world by himself and even affect the real world from within the book, the real world transcends the Goosebumps verse. The Normal World sees other in-verse universes as dreams or pieces of fiction, most notably the dream world and the comic book world. Can interact and directly communicate with the player in Goosebumps Horrortown, who transcends Goosebumps Horrortown and sees it as a video game on a flat screen)

Stamina: Really high (Is a living puppet controlled by a ghost), likely limitless when in ghost form

Notable Summons: Any Goosebumps monster with manuscripts, Pennywise (Pennywise makes an appearance in the second movie)

Intelligence: Genius (In the crossover book Gaslighted: Slappy the Ventriloquist Dummy vs. Aloysius Pendergast, he was persistently tormenting and outsmarting Aloysius Pendergast who served in the U.S. Special Forces as the elite “Ghost Company” (a successor to “blue light”/aka Delta Force), is irresistibly charming, is well-learned in many subjects, can easily communicate with doctors, scientists, intellectuals, vagabonds, highly specialized masters of specific disciplines and people who are aware of culture and a wide variety of language, and is a polyglot, being able to speak multiple languages [I.E. French, Italian, Latin, Greek, Portuguese, cantaonese, Mandarin, and American Sign Language. Highly manipulative and cunning, always planning on what he will do next. Smart enough to operate Nikola Tesla's power tower. Skilled trickster. Skilled at algebra. Very old. Outsmarted R.L. Stine. Skilled insulter. Skilled with technology. Has been in art school for years)

Weaknesses: Easily gets cocky and arrogant. Likes to play with his victims. Is afraid of termites. Can be temporarily put to sleep if his chant is said out loud again. However it is unknown if this actually works.

Retrieved from "https://character-stats-and-profiles.fandom.com/wiki/Slappy_(Canon,_Composite)/Gewsbumpz_dude?oldid=135521"
Community content is available under CC-BY-SA unless otherwise noted.