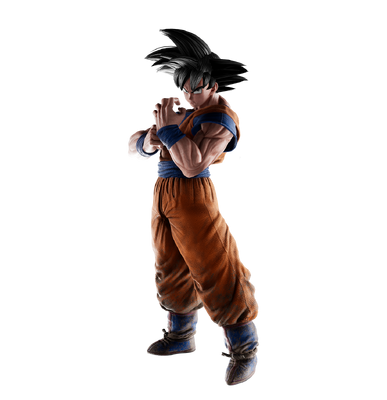 Son Goku (孫そん悟ご空くう Son Gokū), born Kakarot (カカロット Kakarotto), is the main protagonist of Dragon Ball. Goku is a Saiyan originally sent to destroy Earth as an infant. However, a head injury at an early age alters his memory, ridding him of his initial destructive nature and allowing him to grow up to become one of Earth's greatest defenders. He constantly strives and trains to be the greatest warrior possible, which has kept the Earth and the universe safe from destruction many times.

In Jump Force, Son Goku is the leader of Team Alpha, which is in charge of fighting off the invading venoms sent by Kane and Galena.

Age: likely in his 40's in Jump Force since it happens after ToP.

Superhuman Physical Characteristics, Self-Sustenance (Type 1), Master Martial Artist, Indomitable Will, Pressure Point Strikes, Flight, Ki Manipulation (Can be used defensively and offensively - to strengthen his skin, fire ki blasts capable of homing in on his targets, and forming defensive barriers which render Absorption and poison useless), Explosion Manipulation, Danmaku, Extrasensory Perception (Can locate others by sensing their ki), Enhanced Senses (Even without ki training, Goku has exceptional senses that allow him to locate small, distant objects by tracking their smell, see clearly over long distances, and track the movements of others even in pitch black conditions by feeling vibrations in the air), Fourth Wall Breaking (Interrupted and interacted with the narrator), Afterimage Creation, Power Mimicry (Can mimic ki-based techniques simply by witnessing them being performed once), Light Manipulation (Via Solar Flare), Telepathy, Telekinesis, Teleportation, Dimensional Travel, BFR, Portal Creation, Sound Manipulation, Reactive Power Level (In addition to his Saiyan Physiology, which allows him to grow stronger during intense combat, and upon recovering from the brink of death, when Goku fought Jiren in the Ultra Instinct form, his attacks were getting stronger, faster and sharper as he fought on), Statistics Amplification, Rage Power (Initially overwhelmed both Goku Black and Future Zamasu after being enraged by them), Transformation (Can willingly transform into a Super Saiyan 1 - Blue Kaioken x20, multiplying his speed and strength numerous times over), Energy/Ki Absorption and Regeneration (Mid-Low; in Super Saiyan God and Super Saiyan Blue), Fusionism, Sealing (Via the Mafuba), Summoning (Capable of teleporting Zen'ō to his position, or vice-versa, with a mere press of the Zen'ō Button), Paralysis Inducement, Non-Physical Interaction, Acausality (types 1 and 4, immune to changes in the distorted and fusing Jump worlds, including the DB timelines. Likely scales to the time breakers and time patrol who exist outside the normal flow of time, history and normal progression of events), Existence Erasure (Can use the Hakai technique like he did against Zamasu to erase a beings body and soul from History). In Ultra Instinct, Goku gains the following: Heat Generation, Instinctive Reaction, and Power Nullification (Nullified a ki blast fired by Jiren.) | All previous abilities, but vastly enhanced. Goku can hurt and potentially kill Prometheus, a Transdual, Beyond Dimensional being, thus he would need the following abilities to do so. Conceptual Manipulation (type 1), Immortality Negation (Type 1, 3, 4, 5 and 10), Regeneration Negation (True-Godly)

Absorption, Paralysis Inducement, Cold Manipulation, Poison Manipulation, Extreme Heat (Fought Broly whilst completely submerged in lava as if was nothing), Cosmic Radiations (Can withstand the upper atmosphere, where radiation levels are extremely high), Extrasensory Perception (His God Ki cannot be sensed by beings lesser than a "God"), Gravity Manipulation (Eventually adapted to certain levels of it through his Gravity Training. Withstood the Pretty Black Hole in his Super Saiyan Blue form), Transmutation (In Dragon Ball, AP overpowers hax so Goku should be resistant to the Candy Beam), Soul Manipulation and Existence Erasure (Survived a Hakai from God of Destruction Sidra just in his base form), Time Stop (Repeatedly resisted Hit's attempts to freeze him in time until Hit powered up further, as a Super Saiyan Blue with Kaioken x10 and should retain this resistance in his other forms), Empathic Manipulation (Unaffected by Ribrianne's Light of Love), Illusion Creation (Resisted illusions from the Forrest of Terror and Furnace of Eight Divisions, UI would theoretically also give resistance due to not needing to think to act), and Fear and Willpower Manipulation in UI (Whis says in Ultra Instinct Goku no longer feels things like fear, hesitation or impatience) | Can harm, be a threat to and resist Prometheus. This implies at least some resistance to Prometheus abilities.

Attack Potency: Low Complex Multiverse level Should be comparable to Xeno Goku and Capsule Corp Goku (Xeno Goku is more powerful than Demigra, and defeated him in base or Super Saiyan alongside Beat. Demigra was causing the collapse of the entire Dragon Ball multiverse, the Crack of Time and his evil energy transcended space and the Dragon Ball world, breaking the boundaries between dimensions to reach the Overworld, a dimension which views Dragon Ball as fiction. Beat has to become an avatar to enter the Heroes world. Xeno Goku also accessed the Real World, meaning he would need to transcend space as well) | High Outerverse level (Is comparable to Prometheus)

Intelligence: Although Goku lacks knoledge academically, he is cited as a fighting genious. Goku is able to adapt quickly to his opponents fighting style, and is constantly training to sharpen and improve his techniques in combat. He can even learn techniques such as the Kamehameha after seeing it once, despite the average martial artist needing 50 years of training to use it effectively. Goku has also been stated by King Kai to have recieved the equivelent of thousands of years of training on Earth in just 88 days, while Goku was preparing for the Saiyans to arrive.

Weaknesses: Goku tends to hold back in order to enjoy a fight, although in Jump Force this trait is less pronounced.

1. Goku with the Jump Force Genki is the version of Goku we see at the end of the Jump Force story who uses the Spirit Bomb made from the entire Jump Force against Prometheus. The attack frightens Prometheus who is forced to dodge it, and is ultimatly what allows the Player character to become powerful enough to defeat Prometheus. Thus Goku while weilding this energy is logically comparable to Prometheus.

2. Although in Jump Force Goku is seen using the energy as a Spirit Bomb and transfering it to the Player Character, he has in the past absorbed the Genki energy to power himself up, such as when he defeated Super Android 13, in the Budokai games before using dragon fist, in the ToP before he goes Ultra Instinct Sign for the first time etc. We even see Trunks absorb and utilize Genki energy in combat with his sword as well which should scale.

3. Jump Force Goku should be comparable to his Dragon Ball Heroes counterparts Xeno Goku and Capsule Corp Goku as they are all part of the Jump worlds. As the chosen leader of A team, who is in charge of the protection of all Jump Worlds including the DB Heroes one, he logically would not be inferior to them.

4. It should be noted that although "Jump Force Genki" Goku is lacking in proof of many of the usual "hax" abilities from somebody of his tier, he was a serious threat to Prometheus, who views powerful beyond dimesnional beings that are litered with potent "hax" such as Ajimu as nothing but fiction, and on paper has many potent abilities even for his own tier. The ability to harm and resist Prometheus alone implies he can resist and circumvent said abilities at least to some degree, even if not directly shown.