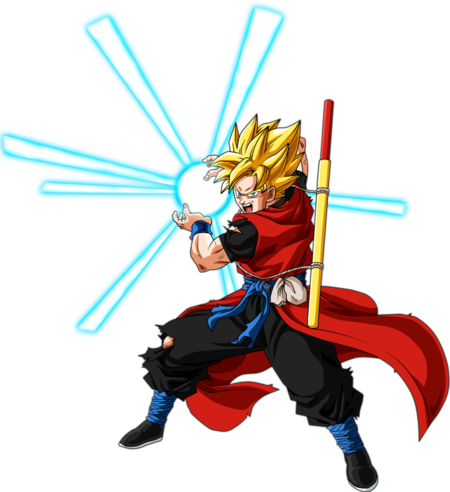 Xeno Goku is a member of the Time Patrol, which are similar to the Green Lanterns; They are like a "gurdians of time". He is one of the main heroes of the Dragon Ball Heroes Game and Dragon Ball Xenoverse game.

Saiyan Physiology: The powers of a Saiyan. Saiyans, like most of the fighters in Dragon Ball, could fly, control and manipulate Ki, use telekinesis, etc. Saiyans also having stamina and could grow stronger with combat and battles (Son Goku never had a potential like Broly but became one of the strongest Saiyans in the history due to his work rate and battles). Goku could push and break his limits time after time, and he did multiple times even without Super Saiyan forms. When he is getting injured, he could get stronger due to him becoming angry which allowing him to break his limits. Goku could increase his powers with the following forms:

Oozaru: When exposed to the light of the full moon, Vegeta increasing his power by becoming a huge monkey. Goku cannot control himself unlike Vegeta.

Super Saiyan: Allowing the user to become 50x times stronger, faster, and more durable then his base.

Super Saiyan 2: 100x times stronger and faster then Base Form. SSJ2 is very fast and one of the best Super Saiyan forms.

Super Saiyan 4: One of the strongest forms ever. The user could use Super Saiyan 4 only after transforming into Golden Oozaru. While the form is very strong, its causing the user to lose control.

Retrieved from "https://character-stats-and-profiles.fandom.com/wiki/Son_Goku_(Canon,_Xeno)/GoldenMaster7?oldid=104847"
Community content is available under CC-BY-SA unless otherwise noted.