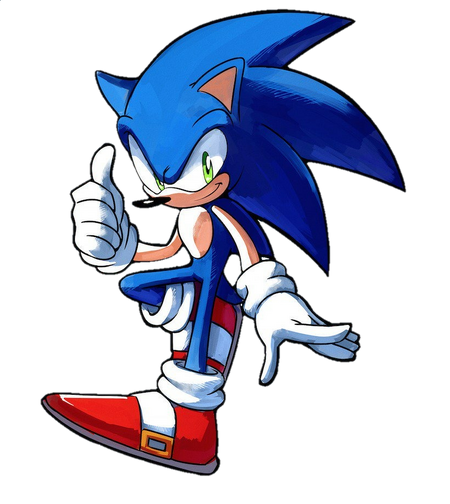 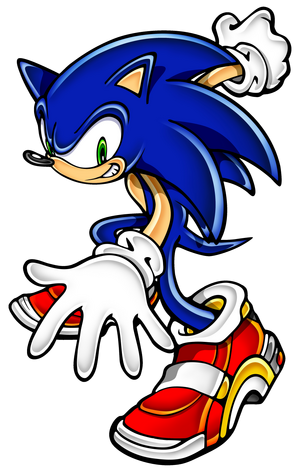 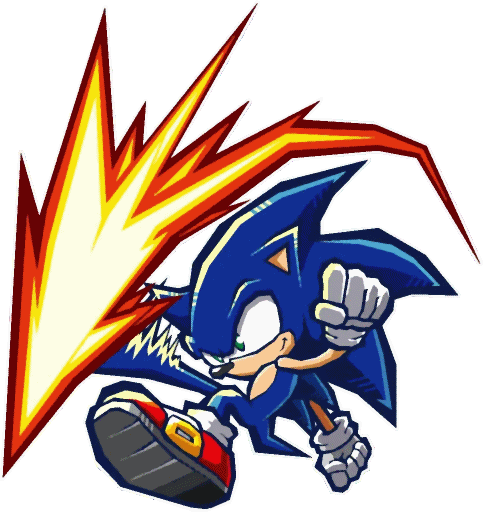 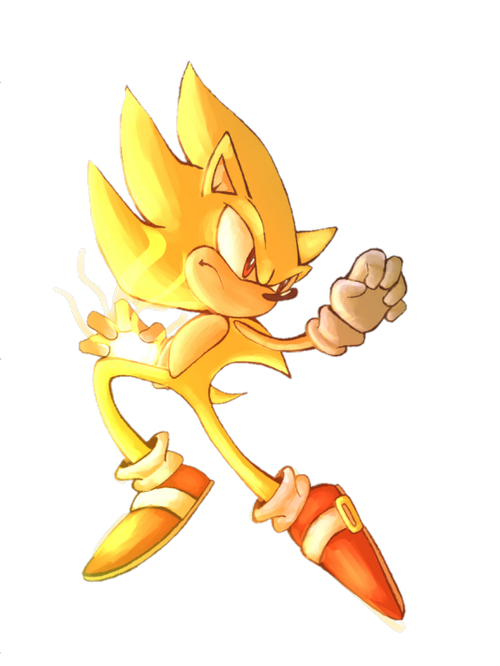 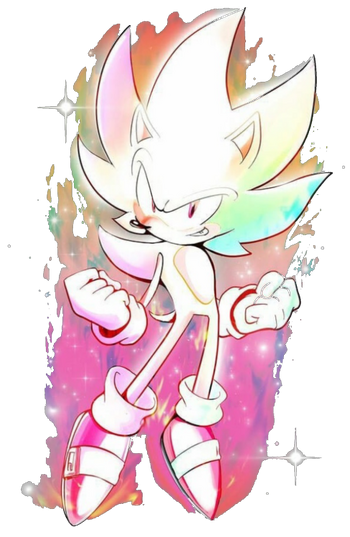 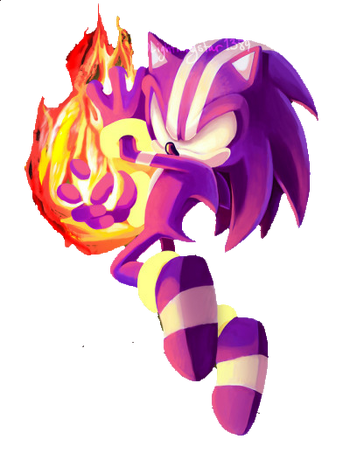 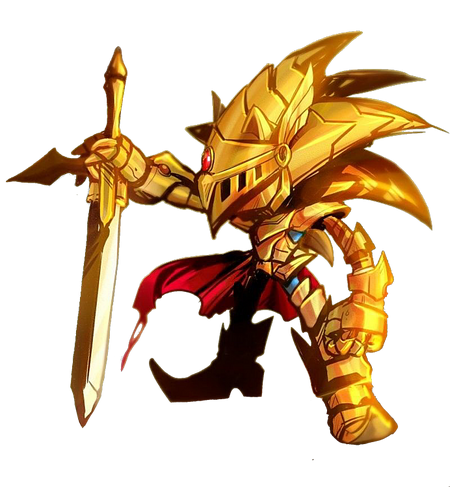 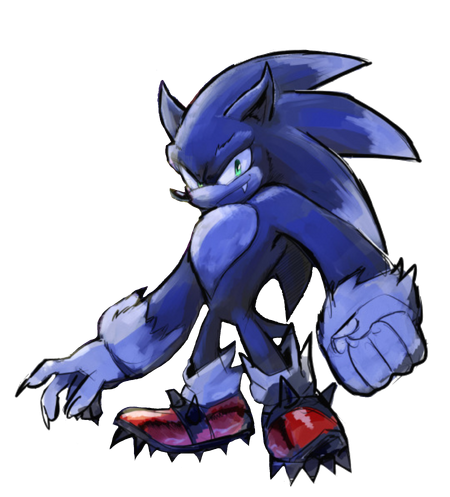 Sonic the Hedgehog is SEGA's video game mascot and world renowned hero. His tale originates from Christmas Island, he was born on this Island and decided to go out and seek for adventure, this ended up setting up the plots for many adventures to come as when he wound up South Island (A mysterious island that houses six ancient gems) he encountered his antagonist Dr. Ivo Robotnok, hell bent on taking over the island, and possibly the world. Sonic collected all Six Chaos Emeralds and confronted Robotnik once and for all. After traveling many locations on the Island he finally beat Robotnik.

Years later since he first encountered Robotnik, he was in a new place, new city, and was once again searching for adventure and excitement, only to find Chaos, literally, as he encountered the God of Destruction known as Chaos, it was revealed that Chaos was living inside the Master Emerald, and was released by Robotnik, so that Robotnik could use Chaos for his own needs.

Once Chaos gathered all Seven Chaos Emeralds, he drained them of their energy and destroyed the City, Sonic revived the Chaos Emeralds with positive thoughts and emotions to which he defeated Chaos with.

Again, a decade later and the world is in total Chaos, old foes returning and Sonic defeated, seemingly murdered, and Robotnik, who conquered he entire Planet, only for Sonic to be brought back to the Planet after being gone for 6 months, he encountered and triumphed over Robotnik once more and finally took back the world.

It seems that whatever is the case or crisis, Sonic will always be the one to inspire hope and prove his dominance over the Eggman Empire...

Personality: Sonic is a kind hearted soul who takes time out of his day to always help out others in need, he believes in freedom and peace, though he's cocky at times, and can come off as brash and offensive, as well as impatient, but, his overall intent is good and does his best to try and please others and free them of evil-intent.

What he Likes: Sonic enjoys a wide variety of things on a scale from Chilli-Dogs, and break dancing, whenever he has the chance he'll stuff his face with a dozen chilli-dogs and before you know they'll be gone. He's loves adventure and always seeks it.

What he doesn't Like: Sonic hates injustice and evil. He also heavily dislikes being cooked up in one place for too long, as after a while he goes crazy and becomes impatient.

Sonic the Hedgehog, Fastest Thing Alive, and Hero of peace.

Main Ability: Sonic's greatest strength isn't his strength, it's his speed. His average speed exceeds that of Mach 1, he's even able to use that speed to create a wide variety of abilities consisting manipulation of his speed, he has complete mastery over it as well, can run backwards just as well fowards, but, his top speed is unknown, but his highest calculated in-game speed was nine times the Speed of Light, that's a blistering 6,035,549,661 Miles Per Hour, offensive is not the only thing he can use his speed for, he can use it for defensive purposes like to heal any physical damage by vibrating his molecules at supersonic speed.

Attack Potency: Planet level+ (Defeated Chaos 4 who has four Chaos Emerald. One Emerald should hold this rating due to moving a Continent back into place) Large Planet level, with Light-Speed Attack (The LSA doubles his attack power which grants this rating) Large Planet level (Equal to Shadow, until Forces. Fought and defeated Chaos 6, and Perfect Chaos, who absorbed the Negative Energy of the Chaos Emeralds which gave the Eclipse Canon it's power. The Eclipse Canon produced 3.736 Ninatons of destructive power. Also battled Egg Dragoon in his Base form when he originally needed his Werehog form to do so. Egg Dragoon scales to this Tier via it having Gaia energy within it. Dark Gaia's energy produced 2.7 Yottatons of power. Higher, with the Light-Speed Attack (The LSA increases his attack potency by over double the amount it originally was | Dwarf Star level (Beat Ultimate Emerl within 30 seconds. Emerl absorbed the power of dead stars. Aka, White Dwarfs which grant this rating | At least High 4-C (One shots multiple Egg-Pawns. Each of which where powered by a White Wisp, which scales to a Void Wisp who can turn itself into a Black Hole and consistently is seen as this Tier. Fought and defeated the Egg Nega Wisp and Egg Robo who created a Black Hole, which was calculated at such Tier | Multi Solar System level (Scales to Infinite who Eggman calls his unbeatable creation. Scales to Death Egg Robot, who created a space with numerous stars) Likely Universe level+ (Infinite created a space known as Null Space. Null Space has subspace properties, a subspace is a hypothetical space-time continuum as well, Null Space is also implied to be infinite in size | Universe level+ (Fought the Dark Queen as Excalibur Sonic. Dark Queen was going to make the Camelot reality go on forever and remake it entirely | Multiverse level (As Darkspine Sonic, he beat Alf Layla Wa Layla, who was gonna recreate all of reality | Multi Solar System level (Should scale above the Final Egg Blaster which destroyed a Star cluster) Low Multiverse level (Beat Egg Salemander who drained the Sol Emeralds of the power which their presence alone was causing Blaze's and Sonic's world to merge together) Multiverse level (Beat Egg Wizard who had the Power of the Stars which sustained the existence of parallel universes and their space-time. Fought and defeated Solaris who shattered timelines and was gonna destroy all universes. Which, thanks to Maginary World, the amount of universes Sonic has is easily within the millions and billions | Multiverse level (Is powered by the Seven Super Emeralds which are empowered by the Master Emerald, Unknown.

Speed: Supersonic (Is described as being faster then sound multiple times) Hypersonic (Is stated he's Hypersonic) Relativistic+, FTL (Capable of dodging lasers) FTL+ (Is faster then his Light-Speed Dash by 9x. His Base speed is over 2x the SOL, this would make him approximately 18x faster then the Speed of Light) MFTL+ (Is comparable in speed to the Egg Mobile which flew from Earth to a star cluster in seconds | Immeasurable (Capable of maintaining movement in areas with no time and space | Immeasurable (Is capable of reacting to Time Eater's attacks. Time Eater moves through time with sheer movement. Is able to react to Solaris's attacks, Solaris exist in all points in time and is described as a super-dimensional life-form, which means he's beyond linear time.

Lifting Strength: Class 5 (Capable of lifting small boulders) Class K Toppled (Egg Golem, which is the size of a small building) Class K, able to move giant metal gears, just by moving his legs and running on top of them | Immeasurable (Managed to push back Solaris who's existence is higher-dimensional.

Stamina: Unknown, at least really high, due to being able to run and go on adventures for a couple of hours.

Range: Mostly up-close combat and martial arts, but does have Hax that are able to bend and destroy space-time and create shock waves and sonic booms by running and gaining momentum, which can be long-range potentially.

Intelligence: Gifted (Capable of mastering extreme gear and swordsmanship in the matter of hours or minutes, is able to outwit Dr. Robotnik's plans every time, Dr. Robotnik has an IQ of 200-300 this puts Sonic to have an IQ of near 300 at least, shows mastery over Martial arts mixing it in with his own speed, Developed his own attacks such as the Spin Dash, Homing Attack, and air dash, and is able to clash with Ultimate Emerl who has all seven Chaos Emeralds, as well as 4,000 years of combat experience.

Weaknesses: Can be extremely cocky at times, he can also underestimate his opponent greatly.

Notes 1#: Some of The Notable Attacks/Techniques section is copied from VSBW and there profile on Sonic, some credit goes to them,

Note 2#: part of this profile is inspired from Maverick X Zero's Profile on Game Sonic, some credit goes to him for allowing me to take inspiration from his profile.

Note 3#: The Large Planet level or High 5-A feats do not contradict the feats that are higher, it's just that those are Low-ends. Plus, Sonic is established to have gotten way stronger then he was before he battled the Egg Nega Wisp Armor.

Note 4#: This profile covers the videogame version of Sonic the Hedgehog, if you want to see other versions check out  the Classic Version , Archie Comic Version , and the IDW Comic version. 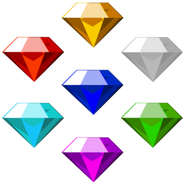 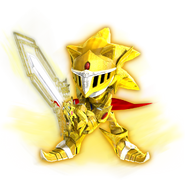 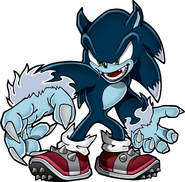 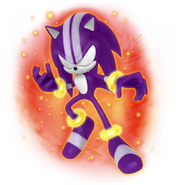 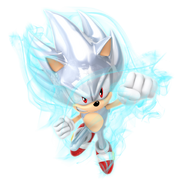 Retrieved from "https://character-stats-and-profiles.fandom.com/wiki/Sonic_The_Hedgehog_(Canon,_SEGA)/Earthyboy?oldid=96589"
Community content is available under CC-BY-SA unless otherwise noted.