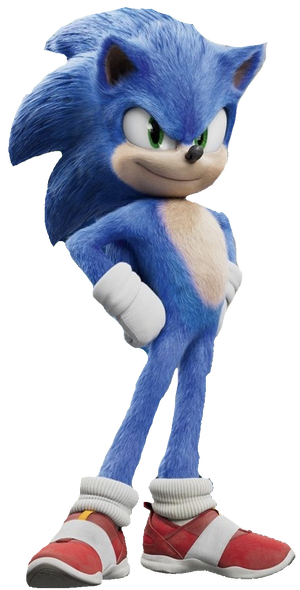 Sonic the Hedgehog is a protagonist of the 2020 movie sharing his name. He is an alien from another world, who's immense power was being stolen by various forces. Sonic chose to reside on earth to hide from all those who wish to have his power. Unfortunately for him, He's discovered by Dr. Robotnik and a citizen named Tom after shorting out the entire pacific northwests power.

Attack Potency:  At least Wall level (Flipped over Robotnik's large vehicle and destroyed a big section of it with his Spin Dash). possibly Large Town level to Small City level (His canon mass along with his running and Spin Dash speed creates a kinetic energy of this level), likely Mountain level with his speed (Responsible for an energy surge that knocked out power across the Pacific Northwest)

Speed: Sub-Relativistic+ travel and reaction/combat speed, likely much higher (Sonic stated that with his power, The US Government could potentially take over the universe, implying universal fast travel)

Weaknesses: Susceptible to being hit with sleep darts, Can lose focus of deadly objects and danger careening towards him

Note: This page is purely based on things seen within the trailers. The movie has yet to be fully released and various information is left out and could be changed or not included in the full product. Also note that this version of Sonic has been through a huge design overall

Retrieved from "https://character-stats-and-profiles.fandom.com/wiki/Sonic_the_Hedgehog_(Canon,_2020_Movie)/RainbowDashSwagger?oldid=97711"
Community content is available under CC-BY-SA unless otherwise noted.