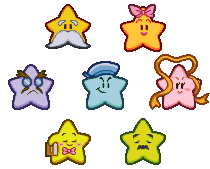 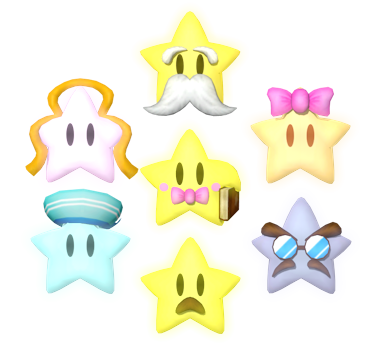 The Star Spirits have existed since the beginning of time itself, watching over all worlds. Their duties were to protect the wishes of all, and the dreams of all. The Star Rod and Dream Depot. When guarding the Star Rod, they reside within Star Haven--a realm above stars. Here is where they assist Star Kids in rising to the sky to become grown-up Stars. First, the Star Kids start out in Starborn Valley, however.

The Star Spirits themselves are the oldest Stars in existence--existing since the dawn of time itself.

Age: Dates back to the dawn of the Marioverse

Powers and Abilities: Powers and Abilities: All seven have Superhuman strength, speed, reflexes, agility and durability, Wish Affinity (They become stronger not only from granting wishes, but from people merely making wishes, too), the ability to empower others, Energy Manipulation, Flight and Astral Projection. Eldstar has Healing and Stamina Restoration. Mamar has Sleep Inducement. Skolar can shower foes in stars. Muskular can lower the Attack Potency of foes. Misstar has Healing. Klevar has Time Stop. Kalmar can turn his foes into lifeless stars, before placing them in the sky. Meta Wish Granting, Plot Manipulation, Power Bestowal and Nigh-Complete Arsenal w/ the Star Rod

Attack Potency: High Multiverse level+, likely High Hyperverse level (The Star Spirits are the Star Guardians, guardians of Dream Depot. Dream Depot is a realm that turns all dreams into universes. The Star Spirits can also "create fun-filled games" within this realm, which all seem to take place within a universe, so they likely created it all in the first place; I mean, they're the guardians, creating fun-filled games that are dreams in of themselves, and you're telling me they didn't create it? Doesn't make sense. So them creating a realm that's at least 5-D, possibly infinite-dimensional would place them at this tier). Higher w/ the power of wishes (Became 120+x more powerful, then bestowed said power on Mario)

Durability: High Multiverse level+, likely High Hyperverse level (Survived an assault from the Star Rod, although they did end up imprisoned). Higher w/ the power of wishes

Intelligence: Nigh-Omniscient (They have knowledge that dates back to the beginning of time itself, and have watched over dreams, people and wishes alike. Have vast knowledge of just about anything. Should also be superior to the Tribe of Ancients in this aspect, who were vastly superhuman in any and all intellectual fields)

Retrieved from "https://character-stats-and-profiles.fandom.com/wiki/Star_Spirits_(Canon)/Paleomario66?oldid=48458"
Community content is available under CC-BY-SA unless otherwise noted.