Thanos was a genocidal warlord from Titan, whose main objective was to bring stability to the universe by wiping out half of all life at every level, as he believed its massive population would inevitably use up the universe's entire supply of resources and condemn this. To complete his goal, Thanos set about hunting down all the Infinity Stones, being confident that the combined power of the Stones would achieve his goal. Thanos forged alliances with Loki and Ronan the Accuser in order to track down some of the Stones. However, both alliances cost Thanos much of his resources, including the Mind Stone and the loyalty of Gamora and Nebula. Fed up with his subordinates' ongoing failures, Thanos made the decision to seek and procure the Stones himself, and he began by forcing Eitri to create the Infinity Gauntlet for him, so that he would be able to wield the power of the Stones safely. Afterwards, Thanos engaged in a ferocious crusade in order to obtain the Infinity Stones. During his mission, both he and his Black Order invaded multiple planets and slaughtered thousands to gain the Stones, including Thor and the Asgardians. This quest even forced Thanos to sacrifice Gamora, in order to obtain the Soul Stone. Thanos soon found himself challenged by the alliances of the entire universe's greatest heroes, which included the Avengers and Guardians of the Galaxy. However, despite facing off against the powerful combined opposition and wrath of these heroes, Thanos still ultimately triumphed as he completed the Infinity Gauntlet, using it to finally complete his goal through the Snap, which resulted in half of all life in the universe being wiped out with a mere snap of his fingers. Following his Snap, Thanos had ensured this could never be reversed by reducing all of the Infinity Stones to atoms, resulting in the Avengers tracking him down on Planet 0259-S, where Thor executed him with Stormbreaker. For 5 years, the universe lived on with the devastating ramifications of his actions.

In 2023, the Avengers resurrected the victims of the Snap after traveling through time to collect the Infinity Stones, while they came across an alternate version of Thanos and his forces, who was determined to destroy the universe and recreate it after learning of his original self's demise. With great personal sacrifice, they finally ended his reign once and for all.

Tier: At least 5-C, higher with Double-Edged Sword. Varies, up to 5-A with individual Infinity Stones. Up to at least 3-A, possibly Low 2-C with completed Infinity Gauntlet

Attack Potency: At least Moon level (Can trade blows with those who can harm him. Overpowered Post-Sakaar Hulk and easily knocked him out. Stronger than Awakened Thor and defeated him off-screen, leaving him severely injured[note 1]. Overpowered Captain Marvel while severely injured. His younger self fought against Post-Decimation Thor with Stormbreaker, Mark 85 Iron Man and Captain America at once in close combat. Casually sent Mark 50 Iron Man flying with a headbutt. Knocked away Post-Decimation Thor with a headbutt. Easily ripped the Mind Stone out of Vision, who is partially made of Vibranium. One-shot Doctor Strange's Tao Mandalas, which blocked blasts from Dormammu, which cut through a formerly inhabited world. Far superior to Ronan and threatened to kill him. Should be far superior to his children, such as Cull Obsidian and Ebony Maw. Easily crushed the Tesseract with one hand), higher with Double-Edged Sword (Deflected Stormbreaker when wielded by Post-Decimation Thor. Broke Captain America's Vibranium Shield). Varies (Can control the power of the Infinity Stones using the Infinity Gauntlet), up to Large Planet level with individual Infinity Stones (Destroyed the surface of a planet in seconds. Ripped apart Titan’s moon). Up to at least Universe level (Threatened to tear down the universe to its last atom and recreate it), possibly Universe level+ with completed Infinity Gauntlet (Might be capable of Infinity Ultron's feats)

Speed: Relativistic+ combat and reaction speed (Easily kept up with Post-Decimation Thor and Mark 85 Iron Man. Casually blocked Iron Man's repulsor. Reacted to Captain Marvel's photon blast while severely injured. Dodged Mjølnir in point-blank range. Moved much faster than Captain Marvel's top flight speed). At least Massively Hypersonic+ throwing speed with Double-Edged Sword (His sword reached Luis' Van before Captain Marvel when she was flying at top speed with a headstart). Varies, up to at least Sub-Relativistic attack speed via Power Stone (Can hit characters like Star-Lord before they can react). At least Massively Hypersonic+ attack speed via Space Stone (Threw meteors at this speed)

Durability: At least Moon level (Endured the power surge from snapping the Infinity Gauntlet, which was stated to be of ridiculously cosmic proportions never seen before, while mortally wounded from Thor throwing Stormbreaker into him. Survived the power surge from atomising the Infinity Stones 3 weeks later, which should be comparable or superior to the first one, though it nearly killed him, but could still withstand attacks from Captain Marvel and Hulkbuster 2.0 afterwards. Withstood multiple attacks from Mark 50 Iron Man and Captain America with Mjølnir. Tanked punches from Post-Sakaar Hulk and attacks from Captain Marvel. Withstood multiple attacks from a bloodlusted Scarlet Witch. Endured a lightning blast from Post-Awakened Thor. Can survive holding the Power Stone with his bare hand. Far superior to Ronan), higher with Forcefield Creation (Blocked a blast from Scarlet Witch)

Stamina: Superhuman (Capable of fighting superhumans for long periods of time without getting tired. Fought against Post-Decimation Thor, Captain America and Iron Man without showing any exhaustion)

Intelligence: Genius (Cunning and ruthless with intellect sharpened by centuries of experience. Brilliant strategist, commanding vast armies that have devastated countless worlds and destroyed empires across the galaxy, which earned him renown as one of the most fearsome warlords in the universe. Highly skilled combatant, who outmanoeuvred heroes such as Thor, Hulk, Iron Man, Doctor Strange, Captain America, Captain Marvel, and many others, during their confrontations. Could quickly and intuitively learn and master how to wield the Infinity Stones. Found a way to time travel from 2014 to 2023 after obtaining Pym Particles. Master manipulator and incredibly charismatic)

Weaknesses: Must be able to move his hand to activate the Infinity Stones. Excessive usage of Infinity Stones had a toll on his body, as left arm has been permanently damaged following the Snap 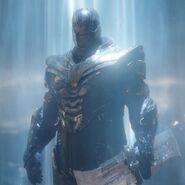