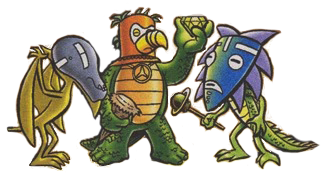 The Ancient Walkers were three Mobian dinosaurs who would go on to completely master the Chaos Force, becoming powerful, god-like beings in the process.

They would often appears through multiple forms including astral projections, where they would give advice to those they saw as the future protectors of Mobius.

Gender: all are Male

Attack Potency: At least Low Complex Multiverse level (Became one with the Chaos Force, a realm of existence transcendent to the space-time of infinite multiverses & the Next Evolution, a realm which transcends conventional space-time. Should be immensely superior to regular Super Forms due to being able to access the full extent of the Chaos Force)

Speed: Immeasurable ( Are one with the Chaos Force, which acts as the "all-encompassing energy of the universe")