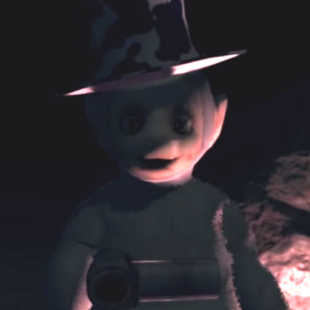 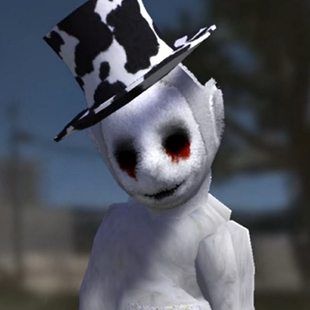 The Guardian is the main protagonist of the Slendytubbies video game series made by Zeoworks. Having to collect the infected custards and fight off the infected Teletubbies while solving the mystery on what happened.

Speed: Subsonic+ movement speed (Can dodge rockets from Ranged New Borns which are comparable to actual rockets. Can outrun infected teletubbies who can dodge bullets), Varies from Subsonic+ to Supersonic+ attack speed with weapons | Subsonic+

Lifting Strength: At least Peak Human (Can carry a huge amount of weapons with no physical restraint) | Class 5 (Comparable to Tinky Winky who can rip heads off)

Intelligence: At least Genius (Outsmarted Noo Noo who created the original virus and hacked into the Central Artificial Intelligence Mainframe. Skilled in stealth and combat. Mastered he has) | Virtually Mindless (Have no higher brain functions beyond killing and infecting)

Weaknesses: Suffers from hallucinations and some degree of PTSD | Low Intelligence, regeneration is limited to only when they evolve and if they die they can't evolve

Skinny (My Property Isn't Normal) Skinny's profile (Speed was equalized, normal Guardian was used and had all his guns)