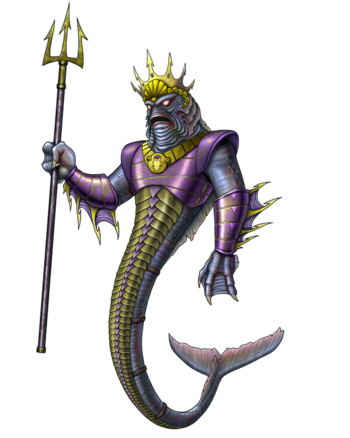 The Storm Titan is the son of Grandfather Spider and Grandmother Raven and the brother of the Ice Titan and the Dragon Titan. Some time after the creation of the three original Titans, Bartleby sang a song that duplicated them into a race of Lesser Titans which would go on and inhabit the First World. The Storm Titans held dominion over the sea, whereas the Fire Titans ruled the land and the Ice Titans governed the sky. Eventually, the three elder races would go to war with each other, which would ultimately destroy the First World. Grandmother Raven would go on to blame Grandfather Spider for the Titans' war with each other, citing that it was his dark chaos which corrupted them into opposing forces of evil.

Because of this, Grandmother Raven trapped Grandfather Spider into a prison, where he remained for Millennia. Desperate to save what they could, Grandmother Raven and Bartleby joined together to sing the Song of Creation and fashion the Spiral out of the First World's broken fragments. As punishment for the First World's destruction, as well as assurance that such an event could not happen again, Bartleby sang the Titanic Lullaby which would place most of the three races to sleep. Millennia would pass, and the Wizard would unknowingly find and free Grandfather Spider from his imprisonment in an effort to defeat Morganthe. Spider's freedom would result in a restoration of his conflict with Raven, which, if left unchecked, could spell the end of the universe. In an effort to defeat Spider, Raven would summon the Storm Titan and command it to destroy Spider's Chaos Heart in Empyrea, despite knowing that it would unravel existence.

Age: Unknown (Was born not long after the dawn of time.)

Classification: Titan, Embodiment of Storm Magic, Ruler of the Seas, Child of Spider and Raven

Superhuman Physical Characteristics, Magic, likely Beyond-Dimensional Physiology (Should scale from Spider and Raven. Exists as a god beyond the understanding of mortals.), Glyph Creation (Can summon Duel Circles to engage in combat. These Duel Circles are referenced as being canon by Grandfather Spider and by the developers on the Wizard101 forums.), Dimensional Travel, Extrasensory Perception, Aura, Immortality (Types 1, 3, 4, 5, and 10. Will continue to exist as long as the concept of Storm Magic does.), Self-Sustenance (Type 1.), Regeneration (High-Godly.), Acausality (Type 5.), Flight, Telekinesis, Telepathy, Poison Manipulation, Weather Manipulation, Air Manipulation, Electricity Manipulation, Technopathy (Storm Magic is used to power up various pieces of equipment throughout the Spiral. Tritons are legendary for their use of technology.), Abstract Existence (Type 1. Exists as the embodiment of Stirm Magic across existence.  Storm Magic must be destroyed across all existence in order to kill the Storm Titan.), Statistics Amplification (Can increase damage output, accuracy, and Healing abilities.), Statistics Reduction (Can weaken healing, accuracy, and damage output.), Mind Manipulation, Power Modification (Can convert damage dealt through Storm Magic into damage dealt through Myth Magic.), Power Nullification, Curse Manipulation, Law Manipulation, Energy Manipulation, Summoning, Matter Manipulation, Sealing, One Hit Kill, Danmaku, Healing, Resurrection, Probability Manipulation, Non-Physical Interaction, Status Effect Inducement, Damage Reduction, Empathic Manipulation, Resistance Negation, Shadow Magic (Has shown the ability to cast Shadow spells and was created in part by Grandfather Spider.), Fear Manipulation, Chaos Manipulation, Death Manipulation, Ice Manipulation, Necromancy, Willpower Manipulation (Has shown the ability to use Death Magic.), Absorption (Could absorb the energy from the Paradox Chains to recharge himself and could absorb the magical Aethyr.) | All the same, but significantly enhanced, along with Rage Power (After absorbing the Aethyr, the Storm Titan was reformed by the hatred and animosity left behind by Grandfather Spider and Grandmother Raven.), etc.

Attack Potency: At least Outerverse level, possibly High Outerverse level (Even while weakened, The Storm Titan was on the verge of destroying the Chaos Heart, which he would have done if not stopped.It was stated if he was to wake up, he would destroy the whole Spiral.) | At least Outerverse level, possibly High Outerverse level (Absorbed the magical Aethyr, which was created by Grandmother Raven to stop herself and Grandfather Spider from manifesting in the world of Empryea. The storm got further amplified by their ancient conflict, and because of this, the Aethyr Titan was capable of heavily wounding Grandfather Spider, who was regaining back his full power due to being near to the Chaos Heart, and Grandmother Raven, who was in a weakened state at the center of the Aethyr. The Aethyr Titan was going to kill Raven and Spider had the Wizard not stopped them.)