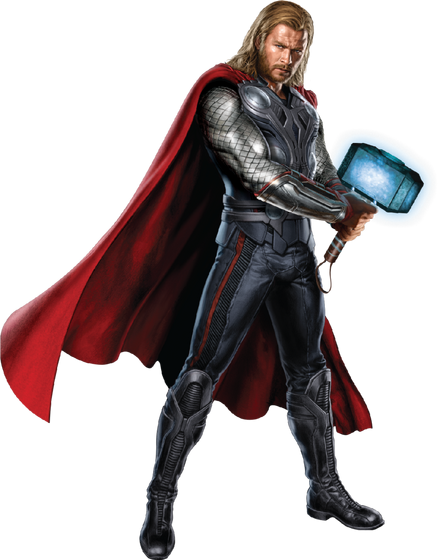 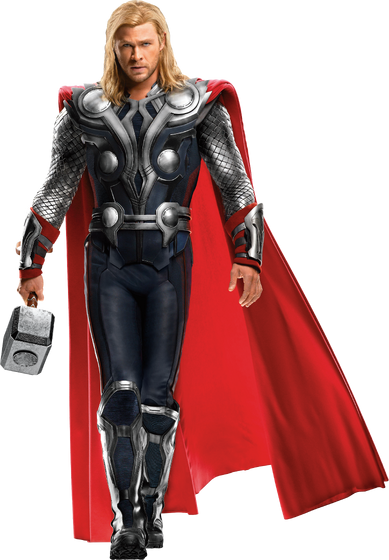 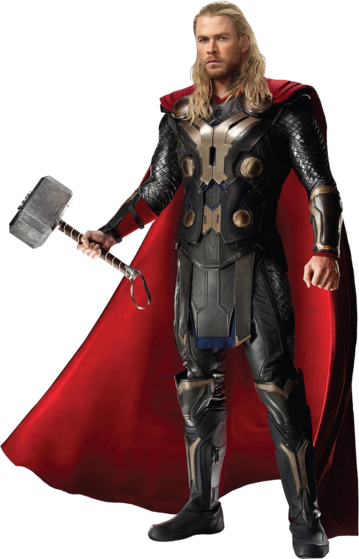 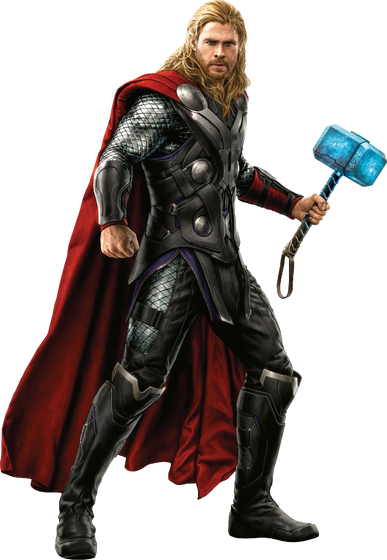 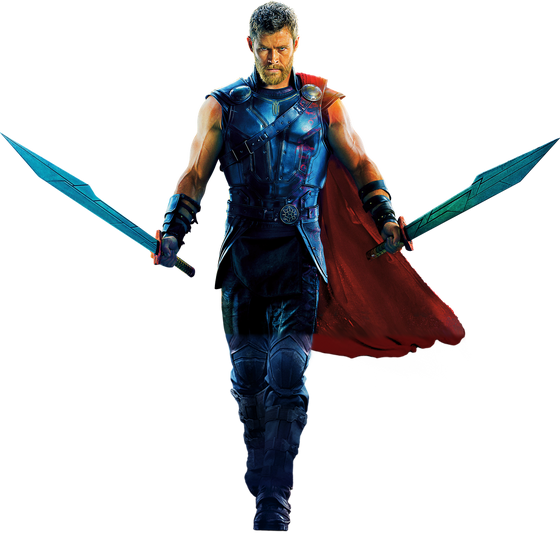 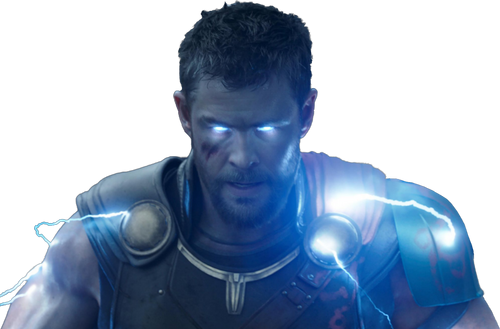 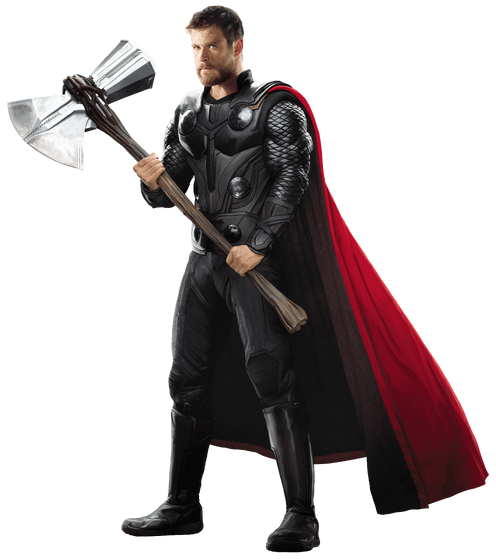 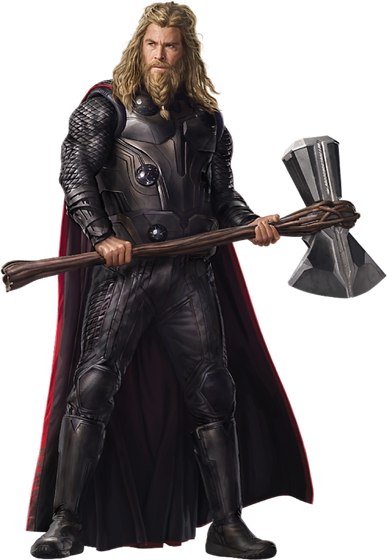 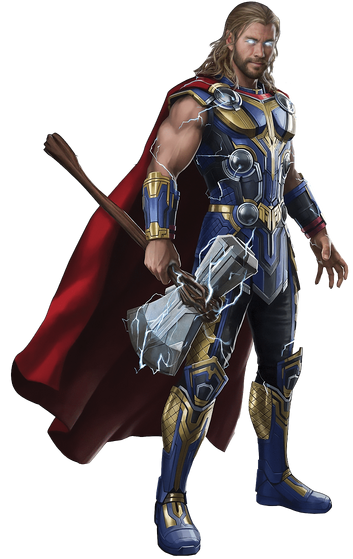 Thor Odinson is the Asgardian God of Thunder and Lightning. He is the former King of Asgard, first son of Odin and a founding member of the Avengers. When his arrogant and irresponsible behaviour reignited a conflict between Asgard and Jotunheim, Thor was denied the right to be King, stripped of all his powers and banished to Earth by his father. While in exile, Thor learned humility and helped to save Jane Foster and his new friends from The Destroyer sent by Loki. In the process, he redeemed himself in the eyes of his father and was granted access to his powers once more, allowing him to stop the automaton once and for all. After being welcomed back to Asgard as a hero, Thor visited Earth to retrieve Loki, who began his attempt to take over the world. He joined the Avengers and fought alongside them against the Chitauri invasion. Following their victory, he returned to Asgard, only to later confront Malekith and the Dark Elves in order to prevent them from returning the universe to darkness. Thor returned to Earth to retrieve the Chitauri Scepter and later deal with the threat of Ultron. He learned of the Infinity Stones and Ragnarok, and sought to locate the former and stop the latter, which resulted in his brief imprisonment by Surtur in Muspelheim. However, shortly after Odin's death, he encountered Hela, who destroyed Mjølnir and caused him and Loki to be trapped on Sakaar. Ultimately, with help from Valkyrie and Hulk, he escaped Sakaar and returned to Asgard. He had to allow Ragnarok to happen in order to stop Hela and her assault by allowing Loki to revive Surtur, resulting in the destruction of his homeland, as well as the death of Hela and Surtur. Afterwards, he became the King of Asgard. However, Thanos' invasion and the subsequent demise of half of all life in the universe caused him to fall into depression, resorting to a life of drinking and playing video games. Five years later, he joined the Avengers on their time heist to collect the Infinity Stones from the past and later fought alongside them against an alternate version of Thanos and his forces, with Tony Stark sacrificing himself to save the universe. After attending Tony's funeral, Thor proclaimed Valkyrie to succeed him as the new King of the Asgardians, while he joined the Guardians of the Galaxy in their adventures in space to find his true purpose.

Attack Potency: Small Building level+ (Singlehandedly defeated a squad of S.H.I.E.L.D. agents. Hawkeye considered him a good match and was impressed seeing him) | Moon level (Destroyed Sokovia and arrested its momentum using Iron Man's heat seal, which would cause global extinction upon impact. Temporarily destroyed the Reality Stone. Casually destroyed a large portion of Jotunheim's landscape 100 times the size of the Grand Canyon and shook the entire planet. Damaged the rainbow bridge with one strike, which can channel the energy of the Bifrost that would destroy Jotunheim overtime, shaking it and the Observatory like an earthquake. Easily created powerful thunderstorms. Can kill Leviathans, which no-sold Iron Man's 200 petawatt lasers and he would lose power before penetrating its armour. Physically on par with Hulk. Fought against Reality Stone-amped Malekith. Equal to Party Thor) | Moon level (More powerful than before. Should be on par with his Post-Decimation self. Held his own against Hela and damaged her with his most powerful lightning blast. Easily destroyed the rainbow bridge with one attack. Knocked back Thanos. Was overpowering Hulk before fully awakening his powers), far higher with Stormbreaker (Wields the most powerful weapon in the history of Asgard. Overpowered a beam from all six Infinity Stones and nearly killed Thanos. Effortlessly decapitated Thanos) | Moon level (Physically challenged Thanos. Effortlessly created and moved a storm), higher with Stormbreaker and Mjølnir (Knocked out Mark 85 Iron Man. Capable of killing Thanos by using Stormbreaker) | At least Moon level (Much more powerful than before), far higher with Stormbreaker

Lifting Strength: Peak Human (Effortlessly carried Eric Selvig) | At least Class M (Easily crushed Mark 6 Iron Man's gauntlet while severely weakened by dark energy. Tore out the spine of an Ultron Sentry with one hand, which should be far greater than tearing out a human spine. Easily tore parts off a spaceship), likely higher (Effortlessly broke out of Surtur's chains wrapped around him many times, while a single chain restrained a fire dragon that caused earthquake-like tremors for some time. Stopped a punch from Hulk with one arm. Equal to Party Thor) | Class P (Moved the rings of Nidavellir, which are the size of a small moon. Held open the Iris of the forge. Nearly on par with Hela) | Class P (Should be around as strong as before. Wrestled Thanos and gave him trouble shoving Stormbreaker into his chest, despite having a disadvantage of leverage) | At least Class P (Stronger than before)

Durability: Small Building level+ (Survived getting hit by vehicles) | Moon level (Tanked hits from Hulk. Took attacks from Malekith using the Reality Stone. Endured multiple punches from Kurse. Undamaged from getting hit by countless Bifrost shards while travelling at superluminal speeds) | Moon level (More durable than before. Survived the concentrated beam from Nidavellir's reignited neutron star, which Eitri stated to be the full force of a star, for several minutes. Endured Power Stone attacks from Thanos, while severely injured from an off-screen beating by him. Took attacks from Hela and resisted her Necroswords, which sliced through Skurge's Uru armour. Withstood a punch from Eitri, who smashed open the mold of Stormbreaker) | Moon level (Should be around as durable as before. Endured multiple hits from Thanos) | At least Moon level

Stamina: High | Superhuman (Fought against hordes of Frost Giants and Fire Demons for long periods of time without exhaustion) | Superhuman (Remained conscious after torture from Thanos using the Power Stone, while already severely injured. Traded blows with Hela for extended periods of time and got back up after resisting multiple attacks from her) | Superhuman

Intelligence: Gifted (Highly skilled fighter and marksman, having fought for several centuries against all kinds of enemies. Knowledgeable in various languages in the universe, including Groot's. Good leader and tactician. Discussed with Bruce Banner about singularities and space travel. Can quickly master use of weapons, including Hulk's gladiator hammer and Stormbreaker) 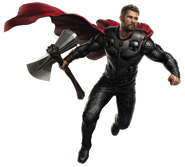 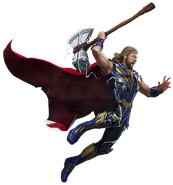